From 1933-53, thousands of area residents enjoyed riding the Doodlebug. Doodlebug? It was not a kid's toy or amusement park ride. The Doodlebug was a self-propelled gasoline powered 40 passenger train car. It ran on the B&O tracks along the west side of the Muskingum River daily serving Zanesville, Marietta, Belpre, Parkersburg, and many points in between. 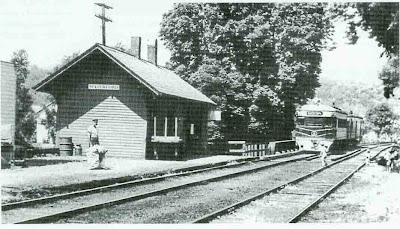 People loved the convenience and the adventure of riding the Doodlebug train. It ran often, had multiple stops for pickups and drop offs, and was generally on time. It was truly a passenger-friendly operation. The Doodlebug would stop for anyone, anywhere, and for almost any purpose along the line. Stories abounded.

Eldon Young, historian for the OL&K railroad group, recalls that the train stopped at one lady’s home where she served the crew lunch. He also said that local residents used the trains as a delivery service for letters to persons along the train line. One Belpre resident sent letters this way to an acquaintance in Zanesville who then responded with a note returned to Belpre via the doodlebug the next day. That was pretty quick turnaround compared to the mail then and now.

Another Belpre area resident reportedly stopped the train and handed the conductor a shopping list. The conductor then purchased the items in Parkersburg and left a full shopping bag sitting near the tracks on the return trip.

Then there was a hunter who tried to flag down train going into Malta so he could ride to other side of town. Hunter waved at the train with his gun up in the air; the engineer kept going. The hunter hitched a ride into town where train was stopped. He asked the engineer: Didn’t you see me standing there waving at you for a ride? Engineer: I saw you there. Hunter: Why didn't you stop? Engineer: You were waving a gun up in the air. Would you stop for someone waving a gun at you? Hunter, hesitating: I guess not...

He also told the story of a conductor who noticed that the passenger count exceeded the tickets sold by one. Someone was riding free. He ordered the engineer to stop in the middle of a large trestle. He then sternly announced his finding that a passenger had not paid and said when the person was identified he or she would be put off the train right there on the trestle. The offending passenger immediately confessed and paid up.

Gene Heldman, local barber and source of community news, recalls fondly riding the train with his mother as a youth. They boarded in Oak Grove for shopping in downtown Marietta. Conductor Bud Parsons would invite young Gene to sit in the operator's seat and "drive" the train down to Harmar. Parsons then took the helm and backed the train over the Harmar bridge to Union Depot, then located along Second Street in Marietta. The Heldmans did their shopping and errands and returned home to Oak Grove on a later train.

A Marietta resident fondly recalls riding the Doodlebug from Stockport to visit family and for doctor appointments in Parkersburg. She explained something that was common in the time period. Her family had a car, but it was used only on Sunday for church or for special occasions. Most of the time it sat in the garage. So, the train was essential for her and many others to get from place to place.

The doodlebug self propelled train cars first appeared around 1904. General Electric engineers identified the practical uses for self propelled railcars. The early ones were gasoline powered and much more economical to operate than a conventional train. There was no need for electric power as with interurbans and trolleys. They became popular for service on lightly used branch lines. Manufacturers included GE and Electro-Motive Corporation based in Cleveland (later acquired by General Motors). They used car bodies built by Pullman Standard, Brill, and St. Louis Car Company.

Derivation of the Doodlebug term is not clear. The term "doodlebug" was given to the first successful rail motor car, the Union Pacific #1 McKeen Motor Car, built in late 1904 to March 1905. When that motor car first arrived for service in Kearney, Nebraska, the switchman looked at the Maroon colored, flat front car body and proclaimed, "Look at the potato bug." The doodlebug term was coined sometime later. The term may also have described the bug-like appearance of a single rail car, viewed from a distance, meandering across open country. Eldon Young said the name stuck because it “doodled” along at its own pace.

The doodlebug cars began service locally in 1933, about 35 years after the original rail line from Marietta to Zanesville was built. That line was initiated in 1884 by Col. Albert Boone, a promoter identified in a 1953 Marietta Times article as a “sharp dresser, smooth talker, and master salesman.” His plan was greeted with skepticism from locals who recalled an earlier failed effort which cost area investors $500,000. Boone’s plan was more practical – he wanted only free right of way from property owners – in exchange for free passes on the train for five years. He obtained commitments of capital from eastern investors, though some local community financial help was also provided. Construction began in 1886. On June 30, 1888, the first passenger train arrived in Harmar from Zanesville, greeted by jubilant crowds, cannons firing, flags waving, and dignitaries speaking.

In July, 1953 crowds again turned out for a more somber occasion – the final run of the doodlebug train and the end of passenger rail service. Passenger use here and across the country had dropped off as the car became the preferred mode of transport after World War II. Freight service had mostly moved to trucks. Only local opposition to abandonment requests staved off earlier shutdown of the line. 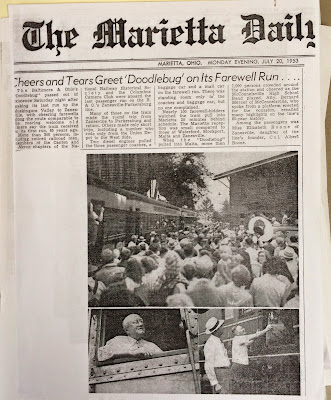 The train cars were packed with passengers who rode the train on the final round trip run from Zanesville to Parkersburg and back. Among the passengers was Elizabeth Boone, daughter of the original rail line’s founder. Crowds gathered at the stops to wave their final goodbye to the local doodlebug.