The recent flooding in North Carolina from Hurricane Matthew was an unpleasant reminder of a similar event that devastated our area in 2004. By Friday, September 17, 2004, the remains of Hurricane Ivan had dumped five inches of rain over two days in Marietta. Seven inches of rain inundated western Pennsylvania in just a single day. The Ohio River was already swollen from heavy rain from Hurricane Frances the week before. Mariettans in flood-prone areas were on edge.

That day the National Weather Service (NWS) posted a flood warning for a crest of 38 feet, 3 feet over flood stage but not serious flooding. Locals were vigilant but hoping that major flooding could be averted. Surprisingly, NWS lifted the flood warning entirely on Friday afternoon, predicting a crest below flood stage. There was relief. Flood preparations stopped. People went home, believing there was no threat.

As torrential rains fell over Western Pennsylvania and West Virginia, NWS updated their river forecast models. At 11:00 pm Friday, the issued a new flood warning for a crest of 41.5 feet. That was a double whammy. Flooding would be severe. And the late hour of the warning left many unaware of the impending disaster as they slept.

The Ohio River rose at the fastest rate ever recorded through the night into Saturday morning, September 18. Some said they could literally see the water rising minute by minute in their basements or approaching their buildings. 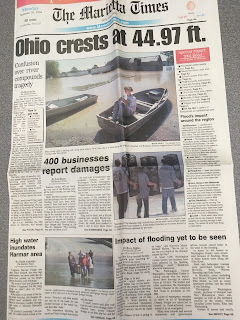 I drove into work at Peoples Bank Saturday morning around 8:00 am and was shocked to see water on Third Street. Incredible. That meant the river level was already at 40 ft, well over flood stage. Most areas in lower Marietta and Pike Street were under water. I felt a knot in the pit of my stomach. This was going to be a tough ordeal for our community.

Stacy Frederick, then a Marietta College student, recalled a campus jolted in action early Saturday morning as flooding became imminent. A 5:45 a.m., water covered Don Drumm Stadium field and would soon flood campus buildings along Fourth Street. Students were marshaled to move items up or into other buildings.

Student Bethany Dykstra recalled the Resident Assistant in her dorm "pounding on my door at 8 am yelling for me to move my car because the Hermann lot was flooding....I got up, threw on some shoes, and moved my car to Fifth Street. As I walked down the mall (back to the dorm), I saw that cars were already under water..."

Eventually water rose 5 feet in the ATO and other houses on Fourth Street. Fayerweather and Mary Beach Halls suffered flood damage. For perspective, at the crest of 44.97 feet on Saturday, the Ohio River lapped at the cross bars on the goal posts at Don Drumm Stadium. Kin Brewer, owner of the Food for Less grocery store, was rowing past the stadium ferrying a relief security guard to the store. He remembers seeing students in a boat taking turns climbing on to the goal post cross bars to take pictures. 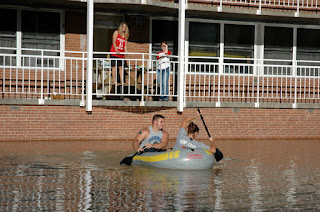 In the downtown area, activity was frantic. Water was already in most buildings along Front Street by daybreak Saturday. Desperate merchants and residents waded through flood water to remove what they could. Many helped each other; volunteers appeared out of nowhere.

Becky Pritchett, co-owner of Twisted Sisters Boutique at 197 Front Street, said they moved things out of the basement on Friday. "But then they called the flood warning off, so we went home." She returned Saturday morning. Ominously, she could see that roadways into town were flooded, a clear sign that the waters were rising rapidly. "We had 5 feet of water in the basement but went to help other merchants....Later volunteer firemen from Oak Grove came and helped us move items from the store up into the small apartment upstairs." 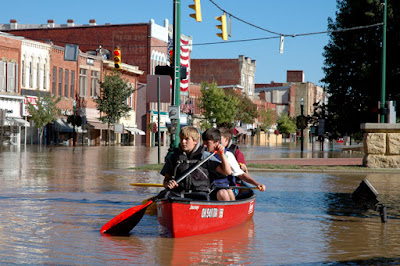 Front and Putnam Streets. Photo by Jake Mecklenborg from http://www.cincinnati-transit.net/marietta.html

Karen Briley with Schafer Leather on Front Street also recalled the rapid rise of the water on Saturday morning. There was 3 feet of water which lapped at the tables holding their displays of boots and leather goods. "We called family, friends, and anyone to help us move everything upstairs," she said. "We formed an assembly line and passed items hand-to-hand." 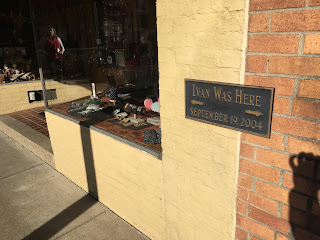 Schafer Leather was started in 1867 and has been through dozens of floods. A plaque on the front of their building marks the crest of the 2004 flood with arrows and the inscription "Ivan was here." Photo by author.

Business owner Glenn Newman said that "some people who saw my web site that I was about to lose a piano that my mother saved from the 1937 flood came to help lift it above the water. His voice hesitated with emotion. "I didn't even find out their names."

Dozens of vehicles were lost to flooding because of the rapid rise and short warning period. But one vehicle was spared in a creative, unconventional way. Harry and Ilene Barengo lived at the Hart Street condos, and the Barengo Insurance office was nearby. Both locations are in the flood plain. For this reason, sons Jim and Randy Barengo had become vigilant river watchers. They were prescient in not trusting the NWS river forecast and stayed up through the night into Saturday morning.

One of Harry's vehicles was in the garage but trapped as flooding sealed off road access. Water crept in on the floor. Jim and Randy figured a way to save the vehicle - by moving it up, not out. They asked their wives to purchase 8 concrete blocks from Pioneer Masonry. The wives met the guys, who arrived in a row boat, at Fourth and Butler Streets. Jim and Randy rowed the concrete blocks back to the condo garage, occasionally scraping bottom under the weight of the blocks. They jacked up the car enough to place a concrete block under each wheel, one at a time. They repeated the operation with the 4 other blocks. The "carjacking" worked. They car was saved from a watery grave.

The Harmar area was almost entirely submerged, but residents are used to flooding. The late Jim Badgett had been in floods before and prepared to ride out the flood at his Maple street home. But he did not plan on his ailing father having to be transported by Marietta Fire Department EMTs through the flood water to the hospital. He said,"I wasn't scared until they took Dad out and I drove through the water."

Dave Moyers, a neighbor of Badgett's on Maple Street was observed fishing from his front porch. He didn't catch any fish but did a lot of people and river watching. "It's pretty wet over here...but I'm dry in the house." Former Marietta Mayor Brooks Harper is restoring a home on Maple street. He had recently found river mud in the kitchen ceiling, probably from the 1913 flood, the worst flood to strike the Ohio Valley.

The flooding attracted national news attention as part of the Hurricane Ivan coverage - and because of the severity. Marietta was the epicenter of that coverage. Satellite trucks showed up on second street. Video footage of flood areas and local officials appeared on many regional stations and national outlets.

Governmental officials showed up to view damage and to show support. Governor Robert Taft visited on Monday, the day after the flood crest and vowed support from Ohio resources. Congressman Ted Strickland visited his flooded office in Marietta on September 21, stepping over dead fish and around an upturned refrigerator. "It's a tragic happening for so many. Just seeing my own office, it's heartbreaking."

FEMA director Michael Brown visited Marietta on Sept 22. After meeting with community members, he was impressed, "...they're upset, mad, angry. But at the same time they're pumped up to rebuild. That's the great American spirit. It's wonderful." His view accurately captured the community spirit. This is the same Michael Brown who came under fire for FEMA's bungling of the Hurricane Katrina disaster in a year later in 2005. A FEMA office opened at the courthouse on Friday, September 24, for local residents to apply for assistance.

By Friday, September 24, local, state, and National Guard crews were working 16 hour days to remove millions of pounds of flood debris from area streets, roads, and bridges. On Tiber Way at the Brighter Day Natural Foods store, the pavement collapsed on September 21 revealing a 10' wide and 15' deep sink hole. No one was hurt and it was expected to be repaired quickly. 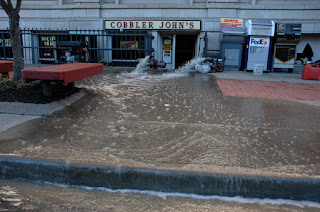 Pumping out flood water on Second Street. Photo by Jake Mecklenborg from http://www.cincinnati-transit.net/marietta.html

Within a week of the flooding, most major streets, many businesses, Marietta College, and local schools re-opened. Almost all businesses, many of whom suffered major losses, pledged to re-open. Pi Chen, owner of Austyn's Restaurant on Front Street, was open within a week after 3 feet of water flooded the restaurant. "I have employees that can't afford to be out of work, and I can't afford to keep closed. We've been working non-stop...This has been really hard to deal with." East of Chicago Pizza on Pike Street reported losses exceeding $100,000; Apex $300,000. There many others affected similarly.

Ivan moved on from the Ohio Valley, but the impact would linger for some time. Ivan is listed among the top 5 most costly hurricanes:


In an ironic twist, on September 23 the remains of Ivan reformed into a tropical storm in the Gulf of Mexico, threatening the Louisiana coast. And, Marietta was struck again by a major flood only four months later in January of 2005. That time, there was ample warning, and it was more of a nuisance than a disaster.

Such is life on the river.