Rufus Putnam, one of Marietta’s founders, a millwright, surveyor, veteran of two wars, pioneer leader, civil servant - faced many hardships in his early life. But those hardships in life and military service formed the foundation for decades of leadership and accomplishment.

Note: Words in bold are your author’s emphasis of Putnam’s traits. 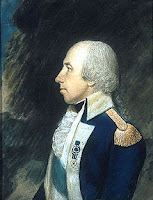 Profile portrait from Wikipedia. Portraits of Rufus Putnam are mostly from middle age or older, and he preferred to be viewed from the left side.

At age seven his father died. Life with his stepfather, Captain John Stadler, after his mother remarried was harsh. He was not allowed to attend school. Stadler believed intellectual pursuits were a waste of time. Biographer Samuel Hildreth noted that Rufus “craved...instruction and would not be appeased without it. He persisted and largely taught himself.  Rufus used scant earnings from waiting tables at Stadler’s public house to buy powder and shot. With that, he shot game birds, sold them for cash, and bought reading and arithmetic books.

As a young adult he took on the obligations of military service. Below are notes from Rufus Putnam’s Journal (quotes are from The Life of Rufus Putnam with Extracts from His Journal unless noted).

The French and Indian War between Great Britain and France, began in 1754. On March 15, 1757, at age nineteen, he enlisted as a “provincial” soldier (volunteer from the American colonies) with the British forces. It was not easy duty.

July 8, 1757: He and two other rangers were sent forward to scout an area near Lake Champlain. They were stranded without adequate clothing or bedding for 2 days when their unit withdrew without them.

July 23: At 8:00 am, Indians attacked his unit near Fort William Henry. There were thirteen dead and one missing. “This was the first sight I had of the Indian butcherings and it was not very agreeable to the feelings of a young soldier.”

August 3: A French Army laid siege to Fort William Henry; on August 9 the garrison of outnumbered British soldiers surrendered. While Putnam’s group of Provincial soldiers were marching to surrender at Fort Edward, Indians attacked “and a most horrid butchery ensued.”  The terms of surrender allowed the British to leave peacefully. Indians on their own began wantonly attacking British soldiers and civilians, including women and children. 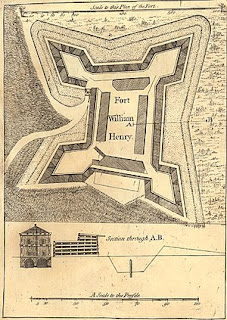 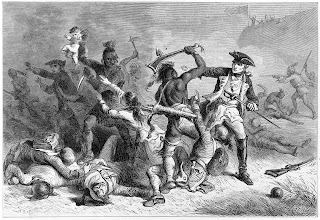 October 8: Most men in his ranger unit were discharged. He was drafted into a group of carpenters until November 8 to finish building fortifications at Fort Edward.

November 18: “Three Hundred and Sixty of us were drafted into....winter quarters. This was a great and unexpected disappointment.” They expected to be discharged earlier when the fighting was over.

February 3: His unit’s official enlistment expired, but the commanding officer insisted they remain and threatened them with death if they left. They set out anyway for Fort Hoosac at 3:00 am. Knee deep snow. Their provisions were barely enough for 2-3 days.

February 4: Snowy, stormy day. Disappointed that they did not reach the fort that evening.

February 5: Started early expecting to reach the fort by noon. “Noon and night came but no fort...Provisions nearly exhausted...several men froze their feet.”

February 6: Realized they had taken a wrong turn along the river. Changed course. Camped on a mountain top. Snow five feet deep.

February 7: Thirty men breakfasted on a small turkey. Followed a small stream which grew into a river by days end - an encouraging sign. Nothing to eat but beech nuts and a few cranberries. “Night found us very faint and much fatigued,” but hopeful.

February 8: Rough terrain. “Men...feeble and lame with frozen feet.” In their desperate need for food, they killed the dog that had accompanied them and ate it. “It was carefully butchered and divided” so that each man received the same amount.

February 10: Arrived at the fort by 10 am where they were cared for and fed. Rufus Putnam stated that for the entire march he had carried the pack (in addition to his own) of Ichabod Dexter, who had severe frost bite.

April 10, 1758: Rufus re-enlisted:  “Notwithstanding my late sufferings (in the previous campaign), I again engaged for another campaign in the Provincial service.”

June 12: He was assigned to a unit of engineers who were sent to Lake George to build defenses in advance of the army’s campaign to take Fort Ticonderoga (then “Fort Carillon”).

July 5: 17,000 British troops advanced in boats along Lake George towards the fort. On July 6, General George Howe, second-in command of the army and beloved by the troops, was killed in an initial skirmish. This was a major blow to troop morale. 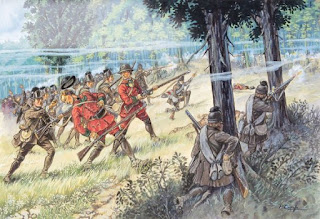 July 8: Putnam’s regiment was building a breastwork (temporary earthen fortification). There was a constant barrage of cannon and musket fire. In the late afternoon he volunteered to carry ammunition forward to the front lines. The army had retreated to a breastwork. He was shocked to see “so many of our men killed and wounded.” 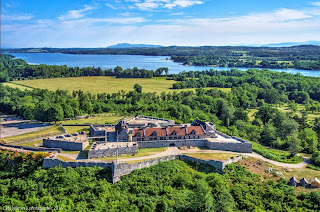 British troops had suffered a humiliating loss at Fort Ticonderoga. Rufus returned to his regiment of Provincial engineers. At midnight they began a march in retreat to Fort William Henry.

Howe’s death prompted a poignant reaction at the time from Rufus, “...I was so panic struck that I remain(ed) with the boat guard (away from the fighting);..... however, I recovered, at least in a measure, (and rejoined) the regiment.” He admitted accepting the risky assignment to carry ammunition to the front lines on July 8 “lest my reputation should suffer” for having shown cowardice after Howe’s death.

His reflection continued: “I have heard that some men say that...they like to fight as well as they like to eat. I never had any such feelings; so far as I am able to judge for myself, it was pride and a wish to excel, ...that influenced me, at that period of life....”

July 22: Putnam’s unit was employed repairing roads from Fort Edward to Albany until October 29 when they were discharged.

November 9, 1758: He returned to Sutton, Mass., his hometown. “Thus I carried through a second campaign, enjoying uninterrupted health, the friendship of my officers, and never charged with any crime. But alas! On my journal I cannot find any acknowledgment to my Divine Benefactor and Preserver.”

April 2, 1759:  He enlisted again: “I this day engaged the Provincial service for the third campaign.”

July 22: A new campaign for taking Fort Ticonderoga was underway. British forces advanced. At 1:00 am on July 27, there was a spectacular explosion which lit up the night. The French had blown up the fort’s munitions and retreated.

November 30: After four months of work, he was discharged, but the engineer in charge did not honor the dollar a day agreement. Rufus was paid only 15 cents per day for his hard work. “I was cheated,” his journal notes with exasperation.

December 1: Embarked with eleven others in two bateaux (large boats) to cross Lake George bound for Fort George. Another ordeal lay ahead. Weather good but worsened. Had to stay the night on a small island. Became very windy and cold.

December 2: Too windy to proceed; “it was never colder since my remembrance.”

December 3: Provisions all gone; “...the cold continuing and hunger increasing.” Luckily they found some old provisions left by others and ate a meal of salt pork and flour.

December 4: One of boats leaked. To lighten its load, baggage was transferred to the other boat which became severely over-loaded. With any wave action they would have perished. “But Providence ordained it so there was a perfect calm the whole day.” Arrived at Fort George just after sunset.

March, 1760: Rufus enlisted yet again and was ordered to recruit others into the Provincial service. It was frustrating duty; he found only a handful of recruits.

June 2: Joined his unit of engineers stationed at south outlet of Lake George. They did not participate in the siege and surrender of French forces at Isle au Noix which paved the way for the British to capture Montreal on September 8, 1760.

The French and Indian War was over. Rufus returned to his primary trade of building mills.

His journal has a curious entry on June 27, 1760: Rufus Putnam reported having a dream that he was attending a wedding in the home of his future father-in-law William Ayers. Rufus then realized he was the one being married. In another dream a short time later he was in a room with his future wife Elizabeth Ayers.

September 10, 1761: He married Elizabeth Ayers but she died less than a year later. Shortly after that, their infant son was also buried. “Thus was I in less than a year deprived of mother and child, and in them, as I then thought, of all earthly comfort.” He would remarry in 1765.

January 10, 1773: Agreed to help find land in the new Florida Territory for veterans of the French and Indian war. But the promised king’s order authorizing the grants was never approved. The Putnam party’s eight month exploration of the lands was for naught. He was reimbursed for only a fraction of his time and expense.

Rufus enlisted again in 1775 - this time in the Revolutionary War. Hildreth: “He buckled on his sword when the strife began, and he did not lay it down till liberty was secure and peace again smiled upon the land” - nearly six years later. 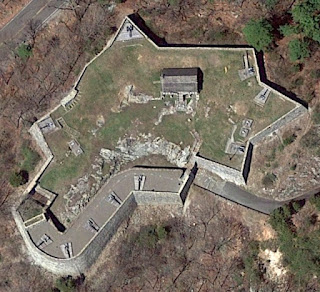 CLICK TO ENLARGE
Image of Fort Putnam at West Point NY built in 1778 by Rufus Putnam and 300 soldiers from the 5th Massachusetts Regiment.

Such was Rufus Putnam’s lifelong sense of duty, commitment, and perseverance that went into whatever endeavor he chose.