Pickleball is now a popular paddle ball net game. It has a Marietta, Ohio connection I was unaware of. It’s history is also a fascinating case study in how differing recollections can make finding the truth a challenge, and sometimes amusing.

I recall my first encounter with pickleball. It was early one morning in the 2000’s while hiking in the scenic foothills above Palm Desert, California. The first rays of the sun cast a rosy glow across the desert valley. I was returning to the trailhead when my desert reverie was interrupted by odd sound: a hollow-sounding bonk, bonk-bonk, bonk, bonk-bonk. The source of the noise appeared as I rounded a hill. There was a tennis court with two guys hitting a ball back and forth. It was not tennis; it looked more like a ping-pong game.  I found out later that it was pickleball: a game with elements of tennis, ping-pong (table tennis), and badminton. It was invented on Bainbridge Island, Washington in the mid 60’s. Over 3 million people now play pickleball. 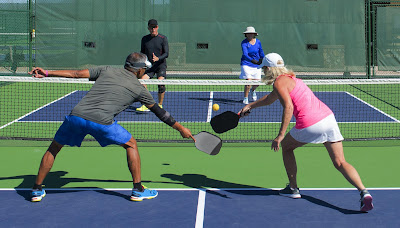 Pickleball game, viewed at https://www.ymcatriangle.org/programs/sports-adult/adult-pickleball
The Marietta connection: The three guys credited with inventing pickleball were Joel Pritchard, Bill Bell, and Barney McCallum. Pritchard’s wife, Marietta native Joan Sutton Pritchard, is credited with naming the game. The Pritchards met while attending Marietta College in the late 1940’s. Joan later moved back to Marietta and enjoyed a long career as a columnist for local newspapers.
Pickleball? Strange name. Joan was a fan of Marietta College crew (competitive rowing) racing. MC crews participated in University of Washington regattas in the 1950s. Joan attended the races and cheered on the team. Her son says she was a rower herself when they lived in Washington state. The improvised paddle ball net game reminded her of improvised crews on a “pickle boat,”* made up of a thrown-together group of rowers who had not rowed in other races. So, she called it pickleball. The name stuck, sort of. 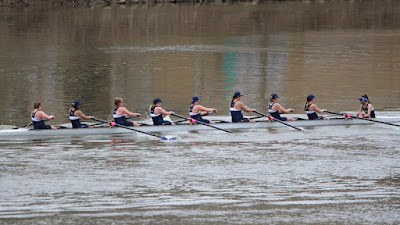 The Marietta College Crew programs have been competitive for decades. This women's rowing team claimed a silver medal in the Division III varsity heavyweight 8+ Grand Final at the 82nd annual Jefferson Dad Vail Regatta Saturday (May 8, 2021) on the Schuylkill River.
https://pioneers.marietta.edu/news/2021/5/8/womens-rowing-takes-varsity-eight-silver-at-dad-vail-regatta.aspx
There is another, more endearing, origin story for the pickleball name. The Pritchard’s family dog, a cockapoo named Pickles, often chased after errant balls and ran off with them. So, they became…..Pickle’s balls. That amusing name explanation was mentioned by someone outside the family to a reporter working on a feature about pickleball. It became a popular story for decades, mentioned as recently as 2020 in a Seattle Times retrospective. Barney McCallum and neighbors the Browns vouch for the dog name version. They recall the exact night that the dog name explanation was “officially” announced at the Pritchard’s cabin.
Joan Pritchard debunked the dog explanation in a 2008 column in the Parkersburg (WV) News and Sentinel newspaper. She explained that the family did not have the dog until a few years after the game started. The dog was named after pickleball, not the reverse. Joel Pritchard agreed in an oral history recording. 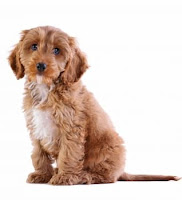 Image of a cockapoo (not the actual Pickles, though - still looking for that image). Cute, eh?
Pickleball was invented in 1965…..or 1966, or 1963, depending on who is telling the story. There are also variations on exactly how the game was invented. The most cited version of the “Creation Story” is that the Pritchard’s children were bored to death at the family weekend getaway place on Bainbridge Island, and they were complaining loudly. Joel and friend Bill Bell returned from golf one day. Thirteen-year old Frank Pritchard whined, “There’s nothing to do here,” repeating a phrase uttered by kids everywhere at one time or other. His father Joel countered dismissively, “When we were kids, we’d make games up, as if to say, “Go find something to do and quit griping.” Frank challenged his dad, “OK, then you can make up a game for us.” Joel and his friends did. The rest is history, so to speak. 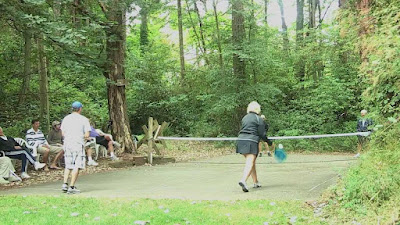 Original pickleball court at the Pritchard’s cabin on Bainbridge Island, Washington
Viewed at usapickleball.org
Co-founder Barney McCallum has a different recollection. There is no golf game in his story. He recalled that the kids were indeed bored, but it was on a rainy Saturday when all the adults were gathered at Pritchard’s home. There was a badminton court there. He says that the adults gave the kids ping pong paddles and a baseball and told them to go play on the badminton court. Another story variation says that the participants really intended to play badminton but could not find the shuttlecock.
There is agreement that the three amigos - Joel, Bill, and Barney -  went to work and designed a game the kids could play. Initially, they used ping-pong paddles, a plastic baseball, and a tennis-type net. The youths, thankfully, were entertained. But so were the adults. Barney McCallum says he couldn’t wait to get out on the court and play the game himself. Soon, he said with a laugh in a video interview, the kids were “pushed out.” Adults found the game addicting. Other neighbors started playing. A wiffle ball soon replaced the plastic baseball. McCallum fashioned larger paddles from plywood. Rules were, well, non-existent at first. Players made their own rules. Over the next few weeks, some basic rules emerged. Pickleball was born.
Tales about the invention of the pickleball game and the name origin illustrate the challenges of history research. Supposedly reliable sources often have differing version of past events. The researcher is left to evaluate the sources, decide which is more accurate, or accept that the exact truth is uncertain. The pickleball origin stories have such variations. That’s to be expected since several persons were involved. We see this in our own memory of events which are retold over the years. Variations and embellishments are mixed in until they become family lore, and therefore “true” in the mind of the recollector.
Joan Pritchard moved back to Marietta in the 1970s after she and Joel divorced. She was a columnist for the Parkersburg News and Sentinel and the Marietta Times. She wrote about local events, history, and personalities. Joan Sutton Pritchard passed away in 2012.
So, remember: When you hear about Pickleball - think Marietta.
*In sailboat racing, the pickle boat is the last boat to finish a race. The “pickle” term comes from the fishing industry: boats fishing for herring would come into port last, having stayed out so the crew could pickle the catch with brine.
Sources:
"Barney McCallum Interview," youtube.com
Barsaleau, Mary and Makinen, Julie, "How Did This Crazy Sport Get Started?", The Desert Sun, October, 2021
Dollard, Wayne, "How Pickleball Really Got Its Name," Pickleball Magazine
Hoffman Estates Pickleball, at hoffmanestatespickleball,com, including copy of a Joan Pritchard column in the Parkersburg News and Sentinel
Kerstner, Jim Historylink.org, "Joel Pritchard, Joel M. 1925-1997," Historylink.org posted 11/11/2016
"The Origins of Pickleball, How It All Began," youtube.com
"Pickleball began on Bainbridge Island in 1965.......", Seattle Times Sept 22, 2020, at seattletimes.com
Taber, Bob, "The Pickleboat: Odds & Ends," evergreenpickleball.club
USA Pickleball.org, History of the Game
"Why Is It Called Pickleball - Incredible Story behind Pickleball," pickleballhunter.com
Wikipedia, "Pickleball"
Posted by David Baker at 3:42 PM