Every Child Deserves a Chance: the look back at the Washington County Children's Home

Suzanne and I, and our Old English Sheepdog Abby, were breathing hard after the steep ascent of the hill behind the old Children’s Home buildings in Marietta. We lived at the time on nearby Rathbone Terrace. On top, it is a serene setting. There are views up the Muskingum River valley. A stand of tall oaks offers shade.

We noticed a mowed clearing with a chain link fence around it. A bronze plaque explained that the area was a burial ground for 77 children who died while residents of the Children’s Home. The plaque had been erected in 1982 by the Washington County Children Services Board.

It was a poignant reminder for me of what the Children’s Home did in decades past- and what Washington County Children Services does today - providing a good home to neglected, abused, or orphaned kids. “Every Child Deserves a Chance” is the tag line for the current levy campaign to fund prevention efforts for at-risk children.

The tradition was begun by Catharine A. (Fay) Ewing (1822 - 1897). She was born in Westboro, Massachusetts, and in 1835 moved with her parents to Marietta. Catharine attended the Marietta Female Seminary and at age of 20 became a missionary among the Choctaw Indians in the west. While there, she learned that an orphan child died from being thrown down stairs during an alcohol fueled domestic argument. “The distress of mind I suffered over this sad affair so affected my health, that I was obliged to leave my work among the Indians, and return home; but the desire and purpose had arisen in my heart to have a home where I might care for such orphaned and homeless children. After this every effort was directed toward that object, every dollar laid up with miserly care.”

She moved to Kentucky to teach and save money for her project. After two years, she returned to Washington County and with savings and a modest inheritance purchased several acres of land in Lawrence Township near Moss Run. There was a two room cottage on the property which became the first “Children’s Home.” She convinced the infirmary trustees to provide $1.00 per week for expenses, pay half the medical expenses, buy new clothes for each child, and pay burial expenses when needed. She pledged to take care of the rest. On April 1, 1858, she took in 9 children under 10 years of age who had been housed in the county infirmary alongside alcoholics and mentally unstable adults. 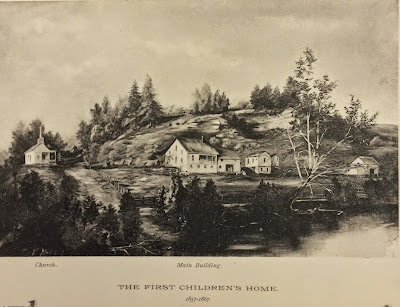 Her initial efforts were applauded by many. But others, especially neighbors, were suspicious and even hostile. Some believed that her “charity” was simply a money-making scheme. Others did not want “paupers” and presumed misfits mingling with their kids. This prejudice lead to threats and vandalism at the home.

School officials tried to block her from sending her kids to the local schoolhouse. When she brought the children the first time, the teacher sent them home. Later a group of men blocked their entrance. They feared for the safety of the other students and objected to the local school having to bear the cost of educating orphans from the entire county. She finally succeeded in enrolling the children but the next year hired a teacher to educate the children at the home, a practice which continued until 1962.

The first few years were difficult. Finances were strained. She had limited help to manage the kids. In 1858 Construction was finished on a new house for the children. They rejoiced at having sufficient living space. Several times illness swept through the house – diphtheria, scarlet fever, influenza. Several of the children died from illness.

The diphtheria outbreak in June of 1860 was particularly challenging and lasted for 5 months. She became ill first and could not care for the kids. Her two hired women left. No others would work there for fear of contagion. Catharine herself explains: “All the help I had in caring for these 23 children, 8 of them sick, was the aid the children themselves could give me, though Mrs. Clogston, a neighbor, did the washing and ironing for me as a favor.” The hardest time came one evening when she thought one of the sick children might not survive the night. One of the boys sought help from a neighbor who refused, saying Catharine “was paid for taking care of the children” and should do it herself. Despondent, she was comforted by one of the children who hugged her and said “God can take care of us.” Their prayers were answered when a short time later Dr. Beckwith and his wife appeared to help out.

She credits the Lord who she says "wonderfully provided for us" and "helped me through with it all, and gave me strength according to my day. Many kind friends He raised up for me, who by gifts of money, donations of clothing, and provisions helped me to supply our wants." Help often came just when things looked the darkest for her - in the form of volunteer help, donations, encouragement, and advice.

Following the Civil War, many additional children of soldiers killed while in service were in need of support. She soon had 35 such orphans at her home. This increased expenses beyond the resources that were available. She realized that additional government funding was critical. She also wanted the Children’s Home to be separate from the County Infirmary, so it could focus solely on the children’s welfare. And she explained: “So many of (the children), too, were soldiers’ children, and these I felt deserved something better of their country than what had been provided.”

Catharine worked with government officials to address the situation. Due to her initiatives, the Ohio legislature passed a law in 1866 providing for the public support of homes for orphaned children in Ohio. It is said to have been the first legislation of its kind in the United States. Catharine later observed: "…the plan which had thought of only as a relief for our own Children's Home, became in God's good providence the means by which such institutions have been multiplied all over our state." She could have added “and all over the country,” as other states adopted similar laws and public Children’s Homes.

Washington County took the lead in establishing a true public Children’s Home. William R. Putnam was elected chairman of the newly appointed trustees. A new Washington County Children's Home building was constructed on a 100 acre farm just outside Marietta on Muskingum Drive. In 1867 33 orphans from Catharine's home were transferred to the new facility. 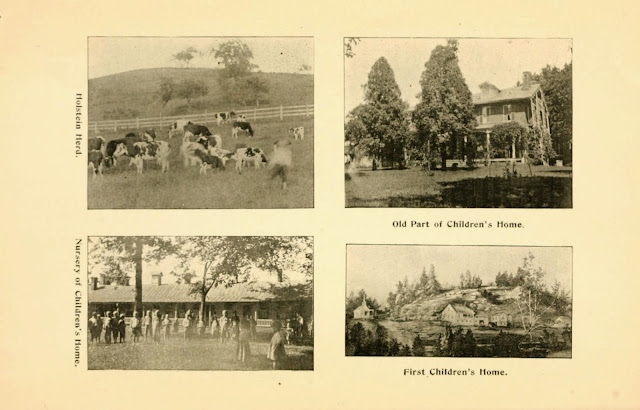 Ironically, Catharine herself was not involved with the new home. She had been offered the position of manager but balked when the trustees refused to hire her husband Archibald Ewing to manage the farm. Ann Guthrie Brown became the first superintendent of the Children Home. Catharine and her husband moved to Marietta, where they operated a boarding house for college students. Still interested in aiding the needy, Catharine led the effort to establish the Washington County Woman's Home, a facility that provided a home for aging females. Catharine died on April 4, 1897, and was buried in Oak Grove Cemetery.

Over the years successive Children’s Home superintendents, staff members, and trustees provided a safe home environment for “their” kids. Goals for each child went beyond basic care and included education and becoming useful citizens. The Century Review of Marietta publication noted: "...the entire premises are made as home-like as possible. Homes to good families are found for the children as fast as practicable and constant watch is kept over each to insure their proper treatment to the end that they may grow up to be useful citizens. The managers have constantly in view the real objects of the home and endeavor to make the children feel that this is a large family and true home...this home is an honor to the state and one in which the people of Washington County take pride." This may not have been a totally objective assessment, but it expressed the good intentions and reputation of the Children's Home over the generations. 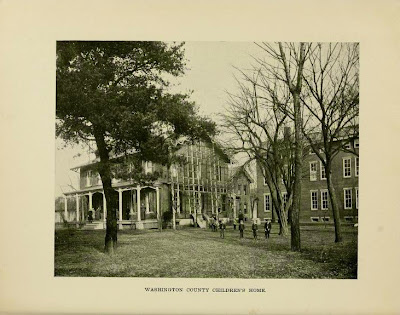 Later reports suggest that the home had as many as 100 residents at one point. There was also success in finding good homes for other children. A 1966 report stated that over 3,100 children had resided in the home since its inception in 1867.

The home closed in 1976 when placing children directly into foster homes or adoption became a preferred method for serving these children. But the tradition of supporting children in need continues through dedicated work of Washington County Children Services agency. Aunt Katie Fay, as she was known, would gratefully approve of progress since her first home and agree that “Every Child Deserves a Chance.”