The Little Steamboat That Could

We know Rufus Putnam as the distinguished leader of the settlement of Marietta. Rufus Putnam was also a steamboat. She (sorry, guys, but boats are referred to by the female pronoun) plied the Ohio River and later the Mississippi River starting about 1823. The Putnam was a sidewheeler steamboat, built for the Ohio River trade at Marietta by Caleb Barstow for Captain John Green and Oliver Dodge. She was small by later standards, just 75 ft by 18 ft in size. 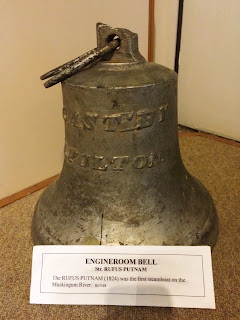 
Her Captain, John Green, decided to invite some friends to attempt a trip up the Muskingum River from Marietta to near Zanesville. Why not? It would be fun and historic - but risky. The Muskingum was not really navigable then. Such a trip by a steamboat had never been attempted. Capt Green chose a time of high water to assure clearance through shallow areas. But the resulting swift current could easily overwhelm the Rufus Putnam. The current also makes navigating a boat much more difficult. Some worried that the steam required to ascend the rapids could blow up the boat. Then there were snags (trees and other debris in the river) which could puncture the hull.

No problem;  passengers seemed willing to overlook safety risks, including possible loss of life. Capt. Green's announcement of the trip attracted a crowd of passengers "quite beyond her accommodations." The Rufus Putnam pulled away from Marietta at 10:00 a.m. on Friday, January 9, 1824. General Rufus Putnam, the boat's namesake and the founder of Marietta, saw the boat off and waved "Godspeed" from his home near the Muskingum River.

The Putnam took on a few more passengers at Waterford, then had to tie up for a while at Luke Chute due to the current. There were stops along the way for wood, the vital fuel of that era for riverboats. Presumably, passengers or locals in the area procured the wood. People gathered along the way, fascinated - or even fearful - of this new sight.

The adventurous cruise reached it's destination at Putnam, Ohio, then a settlement across the Muskingum River from Zanesville. It was 10 p.m. on a dark and rainy Saturday night. One report said that the boat anchored in midstream, fearful that a large crowd would rush on board and capsize the vessel.

Capt. Green and his cruisers created a flamboyant scene. The boat was brightly lit with torches. Ladies on board paraded on the top deck in bright scotch plaid cloaks, the fashion of the day. A cannon on board fired. Area residents, unaware of the Rufus Putnam's presence, feared that Indians - or even the British - were attacking. 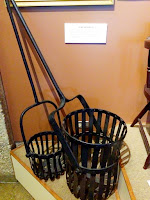 Torch baskets (from Ohio River Museum) of the kind that may have illuminated the Rufus Putnam. The baskets were tilted outward from the boat and pine knots or similar fuel was set ablaze.

The Putnam remained in port. Crowds flocked to see her. Captain Green made two unscheduled excursion trips to Duncan Falls. Putnam (the town) residents entertained the visitors with an oyster supper, characterized as "the acme of hospitality as oysters were 'hard to come by' in inland Ohio at the time."

On Tuesday at 11 a.m. the Putnam began the return trip to Marietta, where she tied up just seven hours later, achieving an average speed of over 10 m.p.h. That was the fastest recorded time ever recorded for that trip, due to the current and not having to transit the lock system later built on the river.

The Rufus Putnam continued to work beyond the Muskingum River on the Ohio River between Pittsburgh and Louisville. She was purchased by Captain David Bates in 1825, who took the Putnam to the Upper Mississippi River where she was only the third steamboat to ascend the rapids to reach Prairie du Chien. The Putnam's river life ended when she snagged and sank in 1825 at Point Chicot in Lousiana, without loss of life.

Captain Green's pioneering trip encouraged further commerce along the Muskingum (an Indian name meaning "Elk Eye") River. In 1840 a lock and dam system was completed from Dresden to Marietta, the first such system on an inland river in the country. That opened the river to robust commerce and river traffic. Since the Rufus Putnam,  more than 175 steamboats reportedly plied the Muskingum until the early 20th century, when trains, trucks, and automobiles made the steamboats obsolete. Most of lock system remains operational today, though almost exclusively for recreational use.

George Washington knew of the Muskingum's navigation potential into the lands north and west of the Ohio River when he made an exploratory trip down the Ohio River in 1770. On October 25, his journal records "...we came to the Mouth of Muskingham...This river is abt 150 yds wide at the Mouth; a gentle currant and clear stream runs out of it, and is navigable a great way into the Country (italics by blog author)...."  The river was mentioned in Washington's endorsement in 1788 of the new settlement at Marietta: "No colony in America was ever settled under such favorable auspices as that (Marietta) which has just commenced at the Muskingum..."

Rufus Putnam was the pioneering leader of the historic settlement at Marietta. The Steamer Rufus Putnam was likewise a bold pioneer of steamboating on the Muskingum River.

Sources:
Quotes unless otherwise noted are from an account of A. T. Nye, Esq., a passenger on the Putnam trip, excerpts of which are reported in various of the publications listed below.
Gamble, J. Mack, Steamboats on the Muskingum, The Steamship Historical Society of America, 1971, Chapter 1, pp 1-6
The Ohio Guide, a Compilation of the Workers of the Writers Program of the Works Progress Administration, The Ohio State Archaeological and Historical Society, 1940, page 544
Cleland, Hugh, George Washington in the Ohio Valley, University of Pittsburgh Press, 1955, page 257
Johnson, Winnie Smith, That's Where It All Began, Marietta, Ohio, River Press, 1988, seen as an excerpt appearing on web page http://wolfcreek.k12.oh.us/Artifacts/Where_Began/RiverHistory.htm, accessed 9/28/15.
Williams, H. Z., History of Washington County, Ohio, pages 368-80, H.Z. Williams and Bros., 1880, viewed on Archive.org, accessed 9/28/15
Riverboat Dave's web site: http://www.riverboatdaves.com/aboutboats/r-2.html, reference: Rufus Putnam (source data provided by Ernie Thode, Washington County Local Historical and Genealogy Library), accessed 9/28/15

Posted by David Baker at 7:58 AM No comments: