Shortly before 2:00 pm on November 15, 1843, the bell tolled at the First Congregational ("Two Horned") Church in Marietta. Crowds rushed towards the church, others to the Ohio River landing. They were eager to see former President John Quincy Adams who would arrive by riverboat and speak at the church.

"JQA" (Adams referred to himself this way) was stopping on his way to Pittsburgh from Cincinnati. He  had spoken at the cornerstone laying of the Cincinnati Observatory on November 10. This was reported as JQA's last public speech, though he spoke in Marietta a few days later. 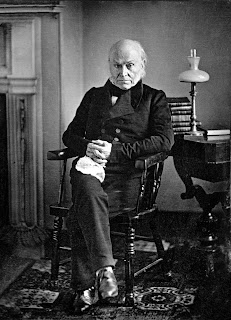 Citizens of Marietta had invited JQA to visit after hearing that he would be speaking in Cincinnati. He accepted the invitation, at least in part because he knew of Marietta's history and settlers, many from his native Massachusetts.

There was no time set for his arrival in Marietta. The tolling of the church bell would be the signal. Observers closely monitored river traffic, looking for the steamboat Ben Franklin. JQA arrived around 2:00 pm. His journal reports that he received "...demonstrations of welcome - a great crowd of people, guns fired, bells rung, and a procession to the...church." 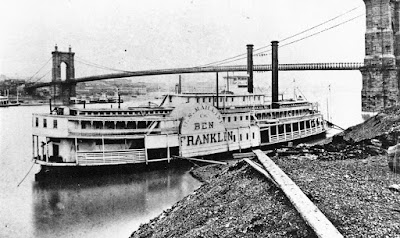 He was escorted to the church by civic leader Nahum Ward. There was heavy rain during his visit, though JQA does not mention that in his journal. It did not seem to dampen the enthusiasm for the former president. 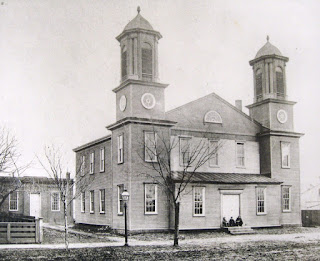 JQA spoke without notes for about half an hour, praising the founders of Marietta, including Rufus Putnam. Those present were surprised by his detailed knowledge about the original settlers, their families, and their experiences in early Marietta. He praised Commodore Whipple, who "fired the first gun on the sea at the British, in the opening of the Revolutionary War." He mentioned many familiar names of original settlers, such as Tupper, Meigs, Varnum, Parsons, Devol, Green, Fearing, and more.

JQA explained that his interest in Marietta began when he visited Manasseh Cutler at Ipswich MA in 1788, shortly after Cutler had returned from Marietta. He said, "...from the time of that conversation I had taken a deep interest in the whole West, and watched its progress, step by step, to its present great and flourishing condition."

He may have read about the early Marietta area residents from their letters published in Massachusetts newspapers. Life on the western frontier was a curiosity to easterners.  Whether he actually recalled details from 50 years earlier or refreshed his knowledge before the Marietta visit, he had a firm command of the topic as he spoke.

After the speech, he greeted citizens at the church. Many ancestors of the original settlers whom JQA had referred to were present. One observer noted: "It was a singularly impressive sight to have the children and grandchildren of the very men Mr. Adams had been speaking of, come up and shake his hand."

George Dana, a descendant of Captain William Dana, brought his young son, John Quincy Dana, to meet the former president. Dana said, "Here is my youngest son, whom I have named to show my esteem for you." JQA placed his hand on the boy's head and pronounced "God bless you my son."

After leaving the church, he toured the Marietta Earthworks, the extensive system of Hopewell and Adena mounds, embankments, and pathways. Marietta's founders wisely took steps to protect these structures. JQA wrote about these in his journal entry of the Marietta visit, recording detailed measurements of one mound and referring to an article about them by Manasseh Cutler.

He then returned to the boat. Marietta leaders Ephraim Cutler, Caleb Emerson, and Joseph Barker accompanied JQA to Pittsburgh. Cutler observed that JQA "conversed with great ease and freedom on the many topics introduced, 'opening the rich store-house of his mind, and pouring forth its well assorted treasures.' "

Ephraim Cutler's journal mentions two topics that he discussed with JQA on the trip. He told the former president that the nation was indebted to his father, John Adams, and to John Jay for their efforts in securing all lands west to the Mississippi River for the United States in the Treaty of Paris. Without this land, the Northwest Territory - which included Marietta and later Ohio and five other states - could not have been created. Tears welled up in the the former president's eyes, and his voice hesitated. He expressed gratitude that Cutler had remembered his "beloved father."

Cutler also mentioned the issue of slavery. The former president was a lifelong opponent of slavery, often speaking out on the matter. Just prior to this trip, JQA recorded in his journal: "Before my lamp is burnt out, I am desirous that my opinions concerning the great movement throughout the civilized world for the abolition of slavery should be explicitly avowed and declared."

Ephraim Cutler told him of the state constitutional convention in 1802 which voted to exclude slavery in Ohio. Cutler was a delegate and fought hard at the convention for a total prohibition of slavery. An alternate provision - authored by Thomas Jefferson -  would have allowed a limited form of slavery. JQA emphatically responded, "Slavery must and will soon have an end." He presciently stated that allowing slavery to continue would lead to national conflict.

Other observations about John Quincy Adams and his visit to Ohio:
Posted by David Baker at 5:49 AM 2 comments: