Working in a bank was a pretty good job for a high school kid in the 60's. Benefits included earning minimum wage (then about $1.25 an hour), no strenuous effort, bankers’ hours 9-2:30, working indoors, great location on the river, and interesting people all around me. Such was life in 1964 at Dime Savings Society of Marietta ("Dime Savings"). Dad was on the board of trustees then - that helped me land the job.

When I started, Dime Savings best years were past. It was a pretty sleepy operation. Depositors were loyal but aged; there were few lending customers. The banking facilities were decades behind. Walking into the lobby was like entering a time warp into the 1800s - pendulum clock, wrought iron teller cages, marble surfaces, and Ebenezer Scrooge-type journals for keeping the books. 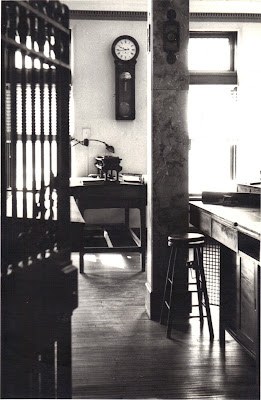 View of my workbench from the vault.

The community at the bank were wonderful, actually similar to those in the movie It's a Wonderful Life. Laurence Penrose was president - pretty low key, wry sense of humor, chain smoker. Carl Galbraith was cashier. He was 70-ish then, always telling a story, breezily greeting customers with the latest news. He knew everything about everybody. I couldn't believe it when he showed me five figure dividend checks being deposited for certain customers.

George Beebe ran the elevator - quiet but with an impish smile and crew cut. Inda Stine was the cleaning lady, animated and chatty. She showed up at 1:30 or so to begin cleaning and often brought in peach brandy. We all had a nip or two - but only after balancing for the day. Harold Cullen was a public accountant with an office upstairs who usually stopped in for a chat. I could hear his high pitched laugh from two floors up. John Rose was the pharmacist who ran the Richardson Apothecary next door and was on the board. There were others.

My day consisted of making journal entries in a huge dog-eared book the size of a volkswagen beetle. The writing implement was a fountain pen. If I made a mistake, there was no eraser, white-out, or cut-and-paste. The corrective implement was a pocket knife with a super sharp blade. The error was removed with surgical precision by lightly scraping off the top layer of paper on the journal page with the knife. My knife was well used and had to be sharpened often.

It was a pretty slow pace. I knew the name of every towboat that passed outside my window on the Ohio River. Occasionally I did odd jobs and ran errands. That included going to Peoples Bank to obtain cash (dollar bills) for the Dime Savings cash drawer. We brought back $10,000 worth of bills (the equivalent of $75,000 today) without fanfare like we were delivering groceries. Then it had to be counted. I usually had the greenish ink stains on my hands for a day or two after. The closest thing to high tech in the bank was a mechanical calculator on Mr. Penrose's desk.

Dime Savings had a distinguished history. It was incorporated on December 6, 1871 and began operation in 1872. It was organized as a mutual savings bank, meaning that depositors owned the bank. It was one of only two such banks in Ohio and the sole survivor when it converted to a commercial bank in 1972. Savings banks were considered safer than commercial banks owned by investors, presumably because the depositor/owners would take fewer risks and be more community focused. Marietta business leaders started the bank and gave it credibility. 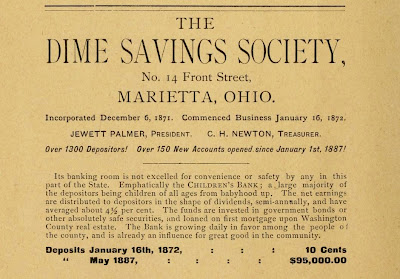 The Marietta Register carried an advertisement for The Dime Savings Society on January 18, 1872. It announced that it would open at 32 Front Street with hours of 9-12 am and 1-5 pm on week days and 7-8 pm on Saturdays. It further heralded that "Deposits from $.10 to $5,000 would be received and put on interest...expenses exceedingly light and all profits divided amount depositors...Boys, Girls, Secretaries, Mechanics, Farmers, Clerks, everybody! This Society is especially for you. Save your small earnings and put them to interest at once." Who could resist that? 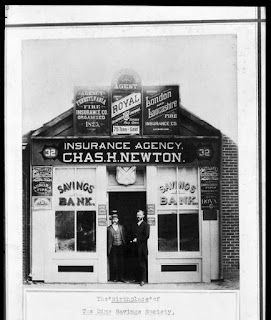 
The Century Review publication in 1901 quoted from a Dime Savings statement of Oct 1, 1900 that deposits had grown from $39,647 in 1882 to $642,106 today. It opined that Dime's growth is "testimony that Marietta citizens not only have confidence in the stability of this institution but have made money and acquired the habit of saving." Growth included a large increase in home mortgage loans, which were not offered by other banks during this period.

In 1902 Dime Savings was profitable enough to build a separate bank building at 114 Front Street. The lower two floors of that building formerly occupied by the Continental club, remain today including the ionic columns from the original building. In 1928 Dime Savings moved to the 5 story building at Greene and Front Streets, opposite the Hotel Lafayette. That was home for the next 43 years.

The Great Depression brought challenges. Bank failures - and bank robberies - were rampant nationally. Board minutes noted that tear gas outlets were installed in the lobby as a defensive measure in case of robbery. There is no record that they were ever used. November 1931 minutes stated that deposits had declined "following suspension of business by three banks in Parkersburg." Continued loss of deposits could trigger a liquidity crisis of the type that occurred in the It's a Wonderful Life movie when Uncle Billy lost the $8,000 check. Fortunately deposits stabilized. The Bank's secretary noted that "deposits increased by $25,000 during the month of October (1932), which was taken as a point for congratulations."

Though deposits recovered, customer loan payments fell behind, necessitating expense reductions - including a 5% cut for the President. In December 1933, Ohio passed legislation allowing savings banks to join the Federal Reserve and the newly created FDIC for insurance of customer deposits. Dime Savings reorganized to take advantage of this feature, but only after a marathon debate among bank trustees because of the expense required to participate in the deposit insurance. (Yes, banks actually pay insurance premiums for FDIC insurance; it's not all government funded). After that, the Dime Savings History booklet says "the next two decades were years of smooth prosperity for the Society."

It was apparent, though, that the Dime Savings was falling behind other more progressive banks in Marietta. Growth was stagnant. There was little investment in equipment, staff additions, or marketing. Front Street declined as Putnam Street became the preferred retail area. There was no off street parking.

The Dime Savings History notes matter-of-factly that in August 1969 "a bank examiners report sparked a reorganization effort." Apparently some major problems were discovered which threatened the financial stability of Dime Savings. Within two years, the Dime Savings Society converted to a commercial bank and ceased to exist as a mutual savings bank - just short of 100 years after its formation.

Today, the bank office space is occupied by the Marietta Area Chamber of Commerce. Only the bank vault, board room, and vintage building stair wells offer reminders of the Dime Savings Society days.