Brick Streets are a signature part of Marietta, Ohio’s small town charm. The Marietta Brick Streets Commission states that Marietta has more brick street mileage (about seven miles total) than any city in Ohio. I'm not sure how to fact check that, but it sounds good to me. Locals are proud of those brick streets as part of Marietta's historic vibe. But that has not always been so.

But first, some background. Brick street paving began as an experiment in Charleston, West Virginia. A man named Mordecai Levi completed paving of Summer Street there in 1870. From that modest experiment, brick paving swept the nation in the late 1800s. Bricks were durable, readily available as brick manufacture expanded, provided a smooth surface, and promised to be low maintenance.

Brick was a welcome solution to a problem shared then by all communities. Almost all streets then were unpaved dirt surfaces which were, uh, dirty. They became boot-sucking quagmires after a rain and dusty rutted hard pan in the summer. A “mud room” was a necessity in homes of the period, not just the quaint convenience of today.

Paving with brick became quite sophisticated. Specialized bricks called “pavers” were created for strength and durability. They were larger than “facing bricks” used for buildings and weighed about 10 pounds. Pavers were fired at a higher temperature, producing a glazed surface which was more water and corrosion resistant. Marietta brick makers, such as Cisler and Acme, manufactured pavers. 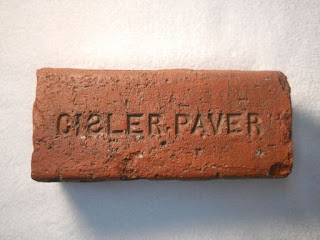 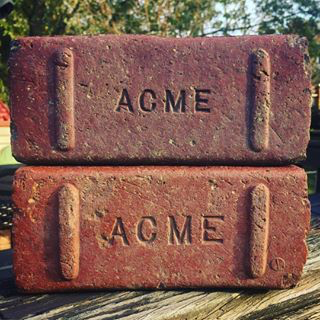 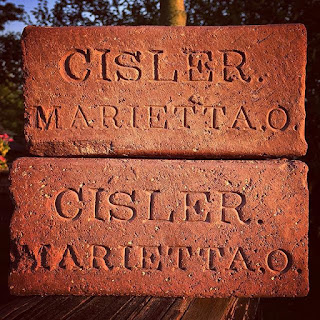 Paving projects were engineered in detail. Preparation of the foundation under the bricks was critical. Gravel and sand were most often used. The subsoil was excavated and rolled to provided a compacted base. Bricks were laid down, curbing installed, and then the bricks were rolled a final time. Then sand, tar, or a concrete grout was used between the bricks once they were laid.

Marietta first paved parts of some streets with brick in 1892, then continued adding streets over the next 20 years. Marietta’s brick paving was mentioned in national settings on at least two occasions.

The first appeared in the January 1899 issue of Brick, a trade magazine. It was a sales presentation to the Fort Worth, Texas, City Council by A. O. Jones of Zanesville, Ohio. His company provided the brick for the 1892 paving in Marietta. Jones’ comments:

Some seven years ago, I made and furnished vitrified brick for paving three streets in the historic city and key to the Northwest, Marietta, Ohio...It is a common scene in early morning to see four or six big and powerful horses hauling monster steam boilers over these streets to the different oil fields of which today she is the center, and has one of the largest boiler shops in Ohio. I procured a testimonial only a few weeks ago, attested by the city officials, stating that, while the brick have been down for seven years the pavement shows little or no signs of wear, and is good for many more years. This is the unvarnished truth, and defies any other kind of paving material to produce such a record, not having cost the city a single cent for repairs, nor is it likely to during the life time of the present generation at least.

Jones not only promoted his brick but Marietta as well. I don’t know if he was given the contract for brick in Fort Worth.

You may have noticed that Jones mentioned “...horses hauling monster steam boilers.” Horses. There were no autos or trucks yet. But paved streets were still essential.

Marietta brick streets were also a topic at the Convention of the American Society of Municipal Improvements in April 1896. Seymour J. Hathaway, Chairman of the Paving Committee for Marietta City Council, presented “Paving Streets with Bricks.” It was fascinating view of the practices and prevalent views on street paving at the time. Here are some of his key points:

From 1892 to 1916, the Marietta times reported that $500,000 ($10 million in today's dollars) had been invested in brick paving. Some work was done almost every year. Thomas J. Summers in his 1903 History of Marietta listed paved streets as evidence of Marietta’s resurgence along with its waterworks, sanitary sewers, paid fire department, electric light plant, interurban train system, telephone service, Ohio River bridge, extensive new construction and several new public institutions. With the many improvements, Summers conferred the term “New Marietta” on the city: “....we welcome “new Marietta”: that we pride ourselves in the ancient history of our city, and rejoice in its modern improvements and advancements.” 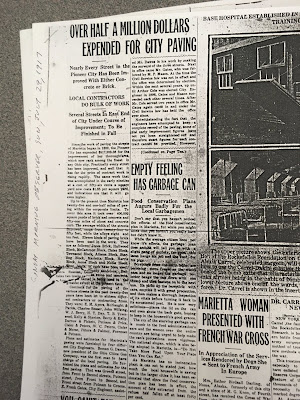 Brick paving was mostly over by the 1920s and 30s. Asphalt and concrete were considered superior for auto and truck traffic. Nationally, thousands of miles of brick streets were paved over for a smoother ride, increasing vehicular traffic, and less noise for residents. The same is true in Marietta. Most of the arterial streets, formerly brick, are now asphalt. But the paving over of Fourth Street in the late 1960's prompted protest from those favoring historic preservation. No brick streets have been paved over since. 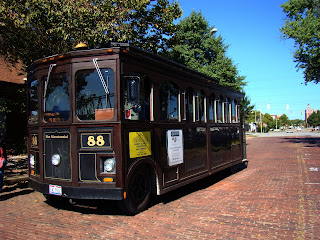 Tourists rumble over bricks on Second Street below Greene Street; the rest of Second Street has been paved over with asphalt. Viewed at gypsyroadtrip.com. CLICK IMAGE TO ENLARGE

In 1988, then Mayor Nancy Hollister created a Brick Street Commission to encourage preservation of Marietta’s brick streets. The Commission researched brick streets, made an inventory of existing brick streets, developed a recommended maintenance program. They also drafted an ordinance to protect brick streets which City Council enacted into law. 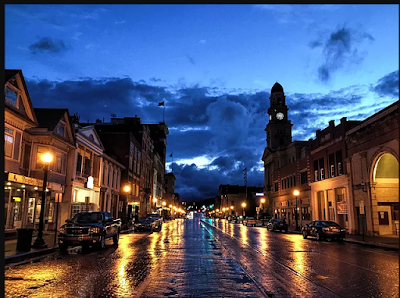 Night Scene of Putnam Street with light glistening off the brick pavement.
From hiddenmarietta.com. CLICK TO ENLARGE 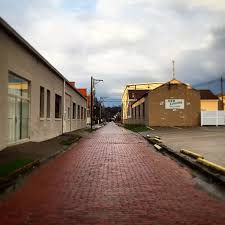 Church Street. Even side streets and alleys were paved with bricks. Viewed at hiddenmarietta.com CLICK IMAGE TO ENLARGE

Brick street maintenance is a constant challenge. Specialized expertise is needed to remove the bricks, correct drainage or other problems, then re-lay them. It can be time consuming, sometimes straining the City’s staffing and finances. Work in recent years has been done by City Street Department workers.

My uncle, Dan F. Baker, who grew up in Marietta, recalled a brick repair project on Fifth Street in the early 1930s. “I was nine years old when Marietta dug up and turned over every brick on Fifth St.  They came clear up to 828 (Fifth Street) where we lived.  I remember hearing the scraping sound of trowels cleaning off the old sand. I watched them from the front windows,  They had horses helping to bring loads of fresh sand. There were no trucks or other motor vehicles involved.”

The future of brick streets in Marietta seems assured for now, thanks to current policies. But constant diligence, patience, and investment will be needed to continue the legacy.