The George Washington we know was an accomplished person in so many ways - surveyor, military and civic leader in Virginia, Commander-in-Chief in the Revolutionary War, and first President of the United States. He was also an astute businessman who owned large amounts of land, including tracts in the Ohio River valley, some within 20 miles of Marietta. His lifelong primary interest and passion was the land: surveying, farming, investment, and development.

Below are two advertisements to lease or sell the Ohio River tracts.
The first, published in 1784, sought to lease the land. There were three Ohio River tracts with a total of 10,000 acres located below the Little Kanawha River. One of those is still referred to locally as “Washington Bottom.” 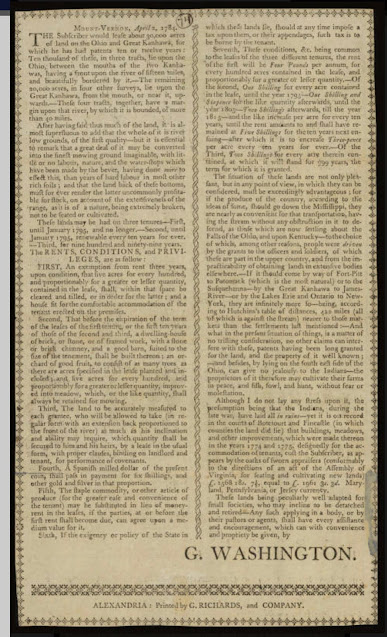 Image from Marietta College Special Collections. Click here for a more detailed view:
https://cdm16824.contentdm.oclc.org/digital/collection/p16824coll7/id/659/rec/1
The lease advertisement offered an incentive for the lessee to build a home and farm the land. He offered three different - and unusual by today’s standards - lease terms: ten years with no renewal, ten years with renewals of ten years “for ever,” and 999 years. The lessor could specify the acreage to be leased. There was an elaborate rent schedule; the amounts varied by term. The mode of payment included a "Spanish Milled Dollar of the present coin and either gold and silver in that proportion." Payment could also be in the form of barter items such a "staple commodity....if the parties....can agree upon a medium value for it."
George Washington or whoever wrote the ad was skilled at marketing verbiage, delivered with just the right combination of practical facts and hyperbole. His description of the land: “....the whole of (the land) is River low grounds, of the first quality...a great deal of it may be converted to the finest mowing ground imaginable, and uncommonly profitable for flock(s).”
The second advertisement is dated February 1, 1796; he was still President at the time. This ad had two sections:
The first part was to lease parts of the Mount Vernon Estate and was the lead headline on the ad:
TO BE LET, and Possession Given in Autumn.
The farms appertaining to the Mount Vernon Estate, in Virginia; four in number; adjoining the Mansion house farm. Leases will be given for the term of fourteen years to real farmers of goodreputation and none others need apply.
Punctuation was exactly as it appeared in the ad, including italics. Note that the words “real” and “good” are not italicized, apparently for emphasis. He plainly wanted only good neighbors on farms adjoining his mansion farm. 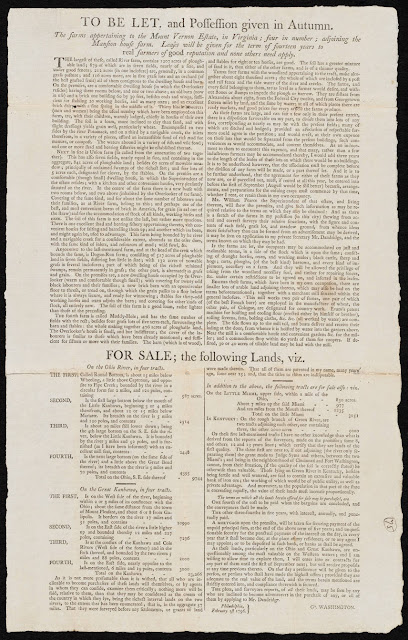 Image from Marietta College Special Collections. More a more detailed view, click here
https://marietta.contentdm.oclc.org/digital/collection/p16824coll7/id/910/
The second part of the ad, “FOR SALE; the following Lands, viz.,” listed for sale the four Ohio River tracts, plus others. The tract listed as “SECOND” was “3 or 4 miles” below the Little Kanawha River, and “about 12 or 15 miles below “Mariette (sic).” The ad invites potential purchasers to “examine them critically,” presumably for full disclosure. He also includes some beneficial attributes:
Terms for the purchase: one fourth of the price up front “when the bargains are concluded,” and balance paid as a mortgage loan over 5 years “with interest, annually, and punctually paid.”
Most of these lands were never sold and ended up in his estate. A few deals fell through for lack of payment. George Washington died in 1799; his estate listed 52,195 acres of land in Virginia, Pennsylvania, Maryland, New York, Kentucky, and the Ohio Valley.
Some background helps understand George Washington’s interest in land and land development. George Washington was educated mostly through home schooling - and life experience -  at a very young age. He did not have a formal school education; much of what he learned was from acquaintance with woodsmen and plantation foremen.
His father died when George was eleven years old, and he became the ward of his half-brother Lawrence Washington. He likely helped his mother manage Ferry Farm where they lived. By his early teens, George Washington had learned tobacco farming, surveying, and raising farm stock.
Lawrence’s marriage to Anne Fairfax of the well-to-do Fairfax family opened valuable contacts for young George. He accompanied George William Fairfax on a surveying party into western Virginia at age 16. The following year through the sponsorship of Lord William Fairfax he gained an appointment as the official surveyor of Culpeper County, Virginia. Biography.com noted, “This experience (as a surveyor) made him resourceful and toughened his body and mind. It also piqued his interest in western land holdings, an interest that endured throughout his life with speculative land purchases and a belief that the future of the nation lay in colonizing the West.”
Washington eventually became a wealthy man, partly from his marriage to Martha Custis, but also from land that he acquired and managed throughout his life. His half-brother Lawrence died of tuberculosis in 1752. George inherited one of Virginia’s most prominent estates, the Washington family lands which became Mount Vernon. He was 20 years old. Land holdings at Mount Vernon eventually grew to about  8,000 acres.
He made his first land purchase in 1752, 1459 acres along Bullskin Creek in Frederick County, Virginia. Over the next 50 years, he continued scouting for and buying or claiming land.  A major land opportunity for Washington was the availability of “bounty land” for military service in the French and Indian War. A 1754 proclamation issued by Virginia Governor Dinwiddie offered land as an inducement to enlist. Washington himself had served in that conflict (some say his actions actually started the war) as commander of a Virginia militia regiment.
The war ended in 1763, but a royal proclamation prohibiting the grants west of the Appalachian mountains stalled the land grant process. Washington began a nearly 20 year campaign to have the grants issued for those who had served under him - and for himself. He began quietly scouting out potential land tracts with Colonel William Crawford , a surveyor friend of his, saying in a letter to Crawford:
I can never look upon the proclamation in any other light (but this I say between ourselves) than as a temporary expedient to quiet the minds of the Indians.....(The proclamation must be rescinded), of course, in a few years....Any person who neglects hunting out good lands, and in some measure marking and distinguishing them as his own, in order to keep others from settling it will never regain it.
He encouraged Crawford to begin secretly exploring the land and making claims. He even gave Crawford a cover story if his actions came under suspicion: “All of this can be carried on by silent management.....under the guise of hunting game...” As opportunities were uncovered, Washington directed Crawford to “...advise me of it....and I will have the land surveyed to keep others off and leave the rest to time and my own assiduity.” The two men continued to collaborate until Crawford’s death* in 1782.
Finally, in 1769, Washington obtained approval to identify lands for granting. He conducted an exploratory trip in 1770 down the Ohio River from Pittsburgh to the Kanahwa River. For more on this expedition from another blog post, click here: “Washington Was Here.”
Fortunately, Washington documented this Ohio River trip in a journal. It is fascinating reading. His observations were astute and practical. He pointed out potential sites for mills (mills powered by water were an essential power source for early settlements), farming, grazing, and other activities.
They passed the Marietta on October 26 and 27, 1770, as noted in these journal excerpts - spelling and punctuation as in the journal:
“Friday 26th......we Incampd just above the mouth of a creek (Little Muskingum River)and just above an island (Buckley Island).
Saturday 27...we came to the mouth of the Muskingham...This river is abt 150 yards wide at the Mouth; a gentle stream runs out of it, and is navigable a great way into the Country for Canoes.” Washington knew that the Muskingum River was a substantial waterway, apparently from Indian contacts.
Washington was constantly vigilant for land grants as they were offered by the Commonwealth of Virginia. In the letter below he asks for more details about an upcoming land grant and requests that eligible veterans be given sufficient opportunity to attend the meeting and benefit from the distribution of land. He also sought to buy or trade with veterans to acquire land for himself. Here is the wording of the letter to surveyor John West who was involved with the land grant issuance:
Mount Vernon Sept.12.1773

Dear Sir: By two letters just come to hand from Col. Stephen and Capt. Hog, I conclude you are returned. These letters appear to have come by you, and refer to a copy of the Resolves entered into at Winchester, which I should be obliged to you for the perusal of; and to know what method you have adopted to give the absentees notice of your meeting on the Kanawha the 20th of October as the time, to those who live at a distance & are to get notice of it yet…to prepare, if they had any other business upon hand to engage them. The reason of my desire to be informed in this matter is on Muse’s account, who I would wish to be early advised of the meeting since he rely upon [it] for the conduct of his part. I should be glad also to know whether you propose to attend the division of the land yourself, and as near as you can guess, the time you will set off.

I am D Sir
Your Most Obed. Serv.
G Washington 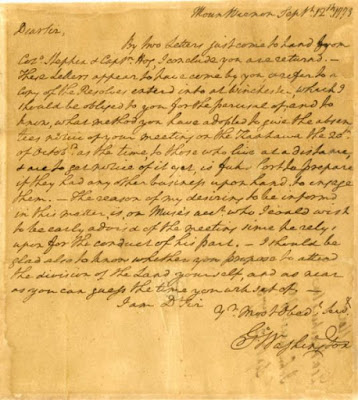 Viewed at raabcollection.com, https://www.raabcollection.com/george-washington-autograph/george-washington-signed-sold-washington-seeks-justice-veterans-war-who
Washington was ultimately not as successful as he had hoped with the Ohio Valley land. Attempts to lease or sell it were mostly unsuccessful. Yet he remained fervent in his belief of the future potential of the Ohio River region. Christopher Coleman captured Washington’s fervor for western expansion, including a quote from Henry Cabot Lodge:
He had been the protagonist of western expansion  long  before he dreamed of independence. When the latter had been won “the thought that engaged his mind most was of the best means to give room for expansion, and to open up the unconquered  continent to  the forerunners of a mighty army of settlers. For this purpose all  his projects for roads,  canals, and surveys  were formed and forced into public notice. He looked beyond the limits of the Atlantic colonies. His vision went far over the  barriers of the Alleghanies; and where others saw thirteen infant  States backed by the wilderness, he beheld the germs of a great empire.”
He supported the efforts of Rufus Putnam and others to settle the Ohio Country and expand the United States westward. About the settlement at Marietta in 1788, Washington said:
No colony in America was ever settled under such favorable auspices as that which has just commenced at the Muskingum (River). ... If I was a young man, just preparing to begin the world, or if advanced in life and had a family to make provision for, I know of no country where I should rather fix my habitation...
*Colonel William Crawford was brutally tortured and killed in 1782. He was captured after leading a failed expedition against Wyandot and Delaware Indians near Upper Sandusky, Ohio. Delaware chief Captain Pipe helped defeat the “Crawford Expedition” and was present at Crawford’s torture and death. Pipe later became more cordial in dealings with white settlers, including those at Marietta. He was often present at Fort Harmar and was reportedly a dinner guest in Rufus Putnam’s home. Putnam, who knew of Pipe’s connection to the Crawford execution, remained wary of Captain Pipe.here
Posted by David Baker at 6:41 AM