My tennis friend Stev Pitchford sent me a photo he took as a photographer for WTAP TV news in the mid-1950s. It was a fire in downtown Parkersburg: WPAR studios were engulfed in flames. His photos (seen later in this blog post) prompted me to research WPAR history.

First, some radio background: The radio phenomenon exploded on the scene in the 1920's. Radio wave experiments began in the 1880's. Guglielmo Marconi is generally credited with inventing a radio system for communication in 1895. By the 1920's, technology advances made it more practical for mass audiences. It soon became a societal game changer, just as television, the internet, and smart phones have been in succeeding generations. Radio brought news, music, entertainment, and sports to the nation. Advertising became big business, allowing companies to mass promote their products - and making radio itself financially feasible.

The first commercial radio station was KDKA in Pittsburgh which went on the air on November 2, 1920. The first major news broadcast on KDKA was the 1920 presidential election. The few thousand KDKA listeners were the first to learn that Warren Harding had defeated James Cox. By 1930 there were 100 million radios in use in America. The stock market was booming; radio stocks like RCA (Radio Corporation of America) were the market stars of that era.

WPAR was the first radio station in the Parkersburg-Marietta area, going on the air July 11, 1935 from a temporary studio in the Chancellor Hotel.  The "studio" was the end of the wide second floor hallway, according to employee Frances Inslee. The station began broadcasting at 100 watts at AM 1420 from a  179 foot transmitter tower on Gihon Road. In 1936 the station moved to new studios in the Grinter Building at 701 1/2 Market Street in Parkersburg. In 1937 it affiliated with the CBS network for expanded news and programming.

But soon regular radio operations were preempted by a local emergency - the devastating Ohio River flood in January, 1937. This type of community service was new to the industry - and to the fledgling WPAR, then less than two years on the air. The station suspended regular programming and broadcast 24 hours a day through the crisis. It provided warnings, updates, and sources for aid. It also acted as a de facto emergency center, coordinating messages, needs, and resources between area agencies and the community at large.

Radio stations were acclaimed across the nation for their role in the flood disaster. Harold McWhorter, then President of WPAR, documented the station's flood experience in an article to Broadcasting Magazine published in the February 15, 1937 edition. Here are some excerpts - in his grandiose wording:

"WPAR prepared for a service (the flood emergency) to be continuous until any threat to life and property might be dissipated."

"WPAR cast aside all other phases of broadcasting activity and dedicated its available 24 hours a day to the service of humanity in general. Throughout the night our agents not only stood by for warnings and reports, but also gave every assistance to local authorities, organizations, and agencies, humanly possible."

WPAR became part of the West Virginia Network in the late 1930's, along with WBLK in Clarksburg, WCHS in Charleston and WSAZ in Huntington. In 1941, WPAR built a new transmitter off  Emerson Avenue in North Parkersburg, raised its power from 100 to 250 watts, and changed to AM 1450.

World War II brought changes across the country to media and civic activities. Many stations produced a booklet with patriotic-type promotional information and details about the station itself. Local programs included wartime civic activities - such as war bonds. Click the link below to see the publication for WPAR. Scroll through to page 15 to see WPAR station photos and information.
http://www.americanradiohistory.com/Archive-Station-Albums/WPAR-WV-Radio-At-War.pdf

Below are some photos of WTAP staff and activities from the booklet. Unless noted, all photos and captions (including spelling and punctuation irregularities) are exactly as they appeared in the "Radio at War - WPAR" booklet, circa 1942, viewed at website listed above. 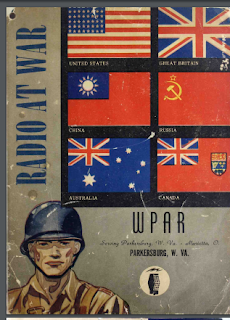 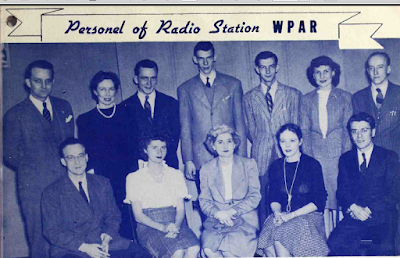 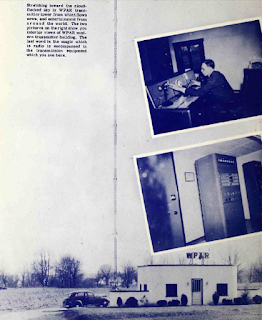 Transmitter at Emerson Avenue site
CLICK ON IMAGE TO ENLARGE

Radio station programming in the 1940s and 50s consisted of network programs (comedies, drama, new, special events), local news, sports, live studio music events, and occasional recorded classic and big band music. WPAR followed this formula. There was no competition for WPAR until 1947 when two new stations started up - WCOM (later WTAP) and WMOA in Marietta. It also broadcast local music programming, including the The Farm Home Hour Trio, The Burroughs Trio, and The WPAR Hillbilly Jamboree Show (then the largest such program in West Virginia). See photos below from the wartine booklet. Details in the captions about these groups are fascinating. 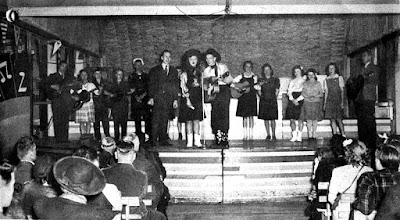 WPAR Hillbilly Jamboree Show. Each Friday night from 1000 to 1500 people attend the Coliseum in Parkersburg to see West Virginia's largest Jamboree show. The show gets under way at 7:30 P.M. with a half hour broadcast from the stage then continues until 9:30. WPAR features Hillbilly acts from all sections of the United States.
CLICK ON IMAGE TO ENLARGE

The "Burrough's Trio" - actually six people - is a favored morning feature for many WPAR listeners. Although the oldest WPAR program from the point of continuous broadcast, it is "the youngest" in the ages of those who perform. "Billy" Jean Burroughs, whose illness prevented her presence for this picture, is the 17-year old director, singer, and "business head" of the crew. The program is nearing its 800th broadcast.
Photo is from http://electricearl.com/parkersburg/WPAR.html
CLICK ON IMAGE TO ENLARGE

The Farm Home Hour Trio. From left to right, Billy Jean (Burroughs), Betty (Burroughs), Brother Charles (Charles Carroll, and their sponsor Sid Ardman (was this the Sid of "Sid's the Big Store"?). This popular Trio has set a record of 1769 consecutive broadcasts.

One of the disc jockeys in the early 1940s was 14 year old Jim Dukes, who later became an actor and was featured in many films, including Coogan's Bluff (with Clint Eastwood) and Ironweed (with Jack Nicholson and Meryl Streep).

The station moved to new studios at 211 Fifth Street in the late 40's. A fire burned out the studios - photos below - in 1956. The station retreated to Seventh and Market Streets (Chancellor Hotel?) while the studio was rebuilt. 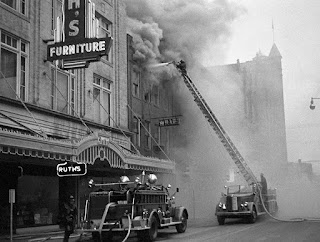 Firefighting viewed from Fifth Street. Ruth's Furniture store is building on the left. Photo by Stev Pitchford
CLICK ON IMAGE TO ENLARGE 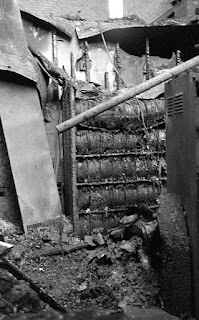 Jack See, a West Virginia radio veteran of more than 50 years, began his career at WPAR in 1943 as a disc jockey while still in high school. See remembers WPAR playing mostly CBS network programs, mainly soap operas and dramatic shows. For a few hours each day, disc jockeys played popular Big Band music. "Every station played about the same music back then. There was no great competition," See said, quoted in a 1996 State Journal article by Paul LePann, "It wasn't until the 1960s and '70s that stations went after 'fragmented audiences.' "

Frank S. Dodd, another former WPAR employee mentioned in LePann's article, remembers the station playing contemporary and classical music, but no rock-n-roll in the 1960s. CBS network shows filled most of the time slots. National bowling tournaments were also broadcast live on WPAR from Parkersburg bowling alleys during the 1960s, Dodd said.

WCEF (its call letters were the initials of owner Calvin E. Franklin) changed the local competitive radio market dynamics when it signed on in 1954 playing rock and roll music at AM 1050. It transmitted at 1,000 watts, and soon after 5,000 watts, giving it a broader reach over the area. It was a "day timer" station that signed off at dusk. It soon became the most listened to station in the area.

Adam Jones, WCEF DJ "Bob Franklin" in 1959-60, recalled that WCEF Hooper ratings were 60-70% - very high for a small market and daytime only broadcaster. But Jones said that he was unaware of the high ratings. He later asked GM Gene Snyder why he was never shown those numbers at the time. Snyder responded, "You would have asked for a raise. Frank (the station owner) would have said no, and you'd have gone elsewhere!"

The WCEF sidebar is included here to illustrate how AM radio became more competitive beginning in the 1960s and 70s. Stations began to specialize their programming ("format") and on-air personalities to maximize their listening audience. For WCEF, the winning formula was rock and roll music all the time.

In the early 1960s, WPAR started playing rock and roll music - at night. Mark Aulabaugh, a former WCEF DJ, recalls this programming change because it was suggested to the WPAR General Manager by Mark's mother. WCEF was off the air after dusk each day, leaving a rock and roll void. And, most radio network programming was gone by then, having migrated to television. The name of the WPAR evening show was Partown USA. It was hosted by John Potts, whose on-air name was Jim Dandy. Another local radio personality Calvin Daily, Jr. (on-air name "Randy Jay") was listed as General Manager of WPAR in the late 1960s.

Starting in the early 1970's, the station entered a period of multiple ownership, management, and station format changes, grasping for traction in the fading AM radio market. In the early 1970's, WPAR dropped the CBS network and was playing a Top 40 music format. On September 1, 1975, WPAR joined the NBC network and adopted a middle of the road beautiful music format. The station was sold in 1983 and the call letters changed to WIKS, and three years later, to WLTP. By that time, radio station call letters often changed to reflect new ownership or format. WLTP tried oldies music in early 1990s and later adopted 24 hour country music programming.

By 1996, it had settled on a 24 hour talk and news format, which included talk show heavy hitters like Rush Limbaugh. Sports Byline U.S.A., a national sports call-in show ran through the night from 10 pm to 6 am. There were many local and regional sports broadcasts. Talk radio seemed to be a good formula at the time for the station - and AM radio in general. John Chalfant, Program Director at WLTP said in 1996, "After a slow start, the Parkersburg community is finally tuning into talk radio."

In 2004, the station changed to WHNK ("Hank1450") and was playing classic country. WHNK went off the air on April 28, 2014 when its transmitter lease was not renewed. The transmitter tower, long a landmark in Parkersburg off Emerson Avenue, came down in May, 2014. (see Youtube video: https://www.youtube.com/watch?v=V0_63bdCe6k). According to radio-locator.com, WHNK remains off the air. The current owner is listed as Fellowship Baptist Church in Vienna, WV. The current FCC license expires October 1, 2019.


WPAR/WIKS/WLTP/WHNK, a proud radio pioneer and long time Parkersburg-Marietta community fixture, is now silent -  mute testimony to the decline of AM radio and impact of changing times.


Sources:
History of WPAR/WIKS/WHNK, Parkersburg, no author given, viewed at http://jeff560.tripod.com/wpar.html

Posted by David Baker at 8:21 AM No comments: