I came across a curious letter written by Rufus Putnam. It probably the shortest he ever wrote:

MARIETTA, May 17th, 1797.
Sir :—
Pleze to Deliver the Dellaware woman, widow of the murdered Indian Such goods as she shall chuze to wipe away her Tears to the amount of Five Dollars.
Rufus Putnam
To Griffin Green esq. or
Charles Green

A notation by “S. P. H.” (presumably historian Samuel P. Hildreth) suggests that the Indian widow’s husband was killed by a white man in revenge for a previous act.

Rufus Putnam was the founder of Marietta, Ohio, and a prominent, courageous, and caring leader. Actions such this payment for the widow were characteristic of Putnam. It was attention to a “little thing” that could have been easily ignored. Author David McCullough noted in his book The Pioneers that when Putnam died he was “widely remembered” for this act of kindness.

Putnam’s integrity set a standard in many ways. Under his leadership, the Ohio Company of Associates (the group that started the 1788 settlement at Marietta) helped the poor and sick, paid the expenses of an injured worker, and formed a militia with Company funds during the Indian unrest.

He structured the Ohio Company so ordinary people and veterans could join. Limits on ownership prevented manipulation by speculators. The books and records of the Company were open to all. Company surveyors had to take an oath to be fair and submit full reports of their work. 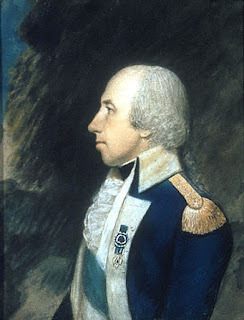 Oil on canvas by James Sharples Sr., ca 1796-1797, viewed at nps.gov. Putnam was painted in uniform, though he had retired from military service in 1793

Rufus Putnam was a person of strong faith that influenced his actions and demeanor throughout his life. As a young soldier for the British in the French and Indian War he recalled that his superior Captain Ebenezer Learned “prayed regularly, night and morning with his men, and on the Sabbath read a sermon...” In 1790 Putnam brought his family and others from New England to Marietta. The trip took several weeks. The group did not travel on the sabbath and attended church. Evenings at his home in Marietta included family prayer time. He was active in establishing and supporting the First Congregational Church.

The letter about the “Dellaware woman” had another fascinating aspect: the spelling and grammar were poor for a person of his reputation. “Dellaware” is obviously misspelled. Other words were spelled phonetically - such as “pleze” and “chuze.” Capital letters appear at random.

Putnam was embarrassed by his poor spelling and grammar. He once wrote to a friend: ....”Had I been as much engaged in learning to write, spelling, etc., as with arithmetic, geography, and history I might have been much better (prepared in life).”

Unlike many of the well educated settlers, Putnam was largely self-taught. His step father did not allow him to attend school. He had an innate interest in learning, though, and used money from waiting tables to buy books. He was a voracious learner through life experience. His life vocations included farmer, millwright, military engineer, surveyor, civil administrator, and politician.

The words of the letter about the Indian widow were few, but the action revealed much about the character of a remarkable man. 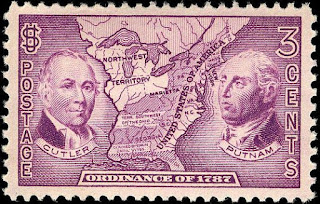 Rufus Putnam is depicted (right) on a commemorative postage stamp issued on July 13, 1937 by the U.S. Post Office which commemorated the 150th anniversary of the North West Ordinance of 1787. The engraving on the stamp depicts a map of the United States at the time with the North West Territory between the figures of Putnam (right) and Manesseh Cutler (left).

Buell, Rowena, Editor, The Memoirs of Rufus Putnam and Certain Papers and Correspondence, Published by the National Society of the Colonial Dames of America in Ohio, Boston and New York, Houghton Mifflin, 1903