A stately thirteen room brick home sits nestled in the trees, mostly hidden from view. Many are unaware of its presence along Seventh Street in Marietta - and its rich history. Three generations of the Thomas Cisler family lived at the “Cisler Terrace” home built in 1886. 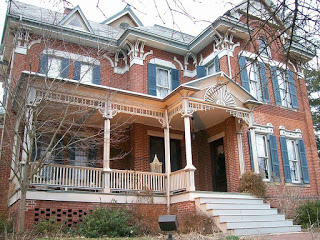 Cisler Terrace home, restored by current owners Dr. Jesse and Laurie Ada. For more information about the home and the restoration click here.
CLICK TO ENLARGE

Heinrich and Anna Zeissler* were natives of Hesse-Darmstadt, Germany, who moved to Marietta from Baltimore with their family in 1838. They lived on a 1,000 acre farm outside of town, near the intersection of today’s Colgate Drive and Glendale Road. The tract of land stretched from Glendale Road to Duck Creek. It was purchased in Baltimore from an agent of the Ohio Company of Associates, the original founders of Marietta. The farm became known as “Home Farm.”

The family grew to include ten children - seven sons and three daughters. The family name was changed to “Cisler” because of confusion about the pronunciation and spelling of “Zeissler.”

Thomas Cisler
Son Thomas Cisler (1836-1920) began the Cisler Brickyard in 1856 - at age 20. It was located where Frontier Shopping Center is today. Cisler Brick provided brick for Marietta buildings and streets and was also a major economic force in Marietta. It was the largest of several brick makers and employed hundreds of people during its 70 year existence. 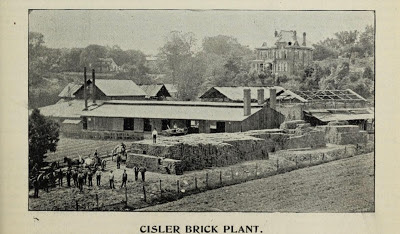 Circa 1900 Photo of Thomas Cisler and Son brickworks, copied by author from Century Review of Marietta, Board of Trade Edition. The home appears in the upper right of the photograph.
CLICK TO ENLARGE 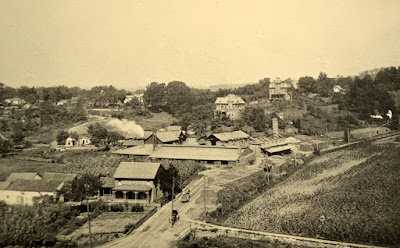 Thomas Cisler was active in the community. He was described by one historian as "a true and able champion of the democratic party, (who) is held in the highest esteem...., both in commercial and social circles." Thomas was a person of deep faith and prominent in St. Luke's Lutheran Church. He served as Chairman of the Church Council for 25 years.

His obituary noted that he “has always been identified with everything that was for the best interests of the city.” One such action to help the city: He donated a 40 foot wide strip of land through his property to allow Seventh Street to be extended from Putnam Street to Tupper Street.

Walter Dow, a Marietta postman, was an astute observer of community people and events in the early 20th Century. About Cisler he wrote:

“Grandpa Cisler was low in voice.” He was “pleasant, would answer your questions, but was of a quiet nature. Gossip was not a major topic of his.”

“He would show an employee how do (a task) by actually doing it before him.”

“He was slightly built and nearly six feet tall. His eyes were deep set, forehead high. His hair had a tendency to lay over his shirt collar int he back. He always wore a blue shambry shirt starched to a high degree. His shirt was buttoned clear to the top but no tie. His trousers were of a tough material....and they drooped over his stretch canvas-sided shoes.”

“The Cislers were frugal and small things were given wide consideration.” 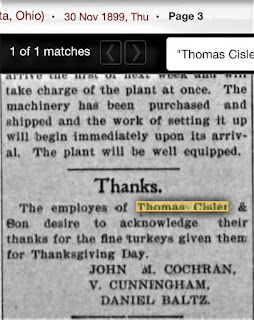 Both Thomas and his son Thomas H. persevered through business challenges. They rebuilt the brick works after major fires in 1890 and 1910 and tornado damage in 1902.

Thomas H. Cisler
Thomas H. was born in 1869. He joined the brick business in 1889 after graduation from Marietta College and continued it after his father died. He married Lillie E. Weiss on July 30, 1900. The couple enjoyed an extensive wedding trip in the western United States. They held a reception for employees when they returned: 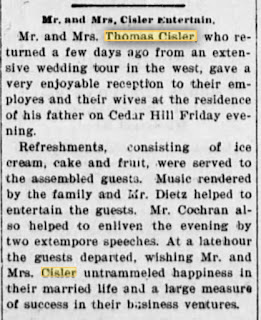 His wife died in 1905; he never remarried. They had two daughters, Lillian and Grace. He lived at the Cisler Terrace home with daughter Lillian Eleda Cisler until his death in 1950.

Like his father, Thomas H. was an energetic civic and religious leader. He was an 1889 graduate with honors of Marietta College and became a lifelong supporter of the College. His donations to the College included family bibles printed in 1491 and 1641 as well as land for an astronomy observatory on “College Hill,” site of today’s Marietta Middle School. He was awarded a Doctor of Laws degree by Marietta College in 1946. 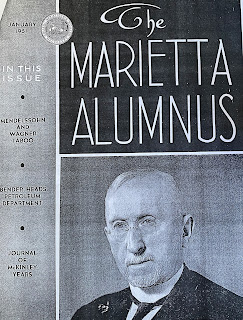 Copy of Marietta College “The Marietta Alumnus” publication shortly after Thomas H. Cisler's death in 1950 with his photograph on the cover (Courtesy Marietta College Special Collections).
CLICK TO ENLARGE

Thomas H. Cisler was active in the St. Luke’s Lutheran Church, serving as organist, choirmaster, and head of the church council. He was organist for 26 straight years, missing only one Sunday - due to the death of his wife in 1905. He promoted missions of the Lutheran Church, leaving the Cisler Terrace home to the local church to foster world wide missions.

Thomas H. Cisler dressed formally (as seen in the photo above) when not at the brick works. Observer Walter Dow: “Mr. Thomas (H.) Cisler, Jr. was always dressed to perfection. In fact, he could go to a funeral or wedding or tea on short notice. He was conservatively dressed - a black alpaca suit, white shirt, black tie and shoes, and....a derby hat. He was friendly (and) spoke pleasantly...”

He founded the Marietta Bach Society in 1923 to foster interest and enjoyment of German composer Johann Sebastian Bach’s music. Concerts were held annually at the Cisler Terrace home on July 30, the date of Bach's death. His daughter Lillian E. Cisler continued the program until her death in 1993.

Cisler was intensely interested in astronomy. He founded the Marietta Astronomical Society. Discussions focused on the theme of “The Heavens Declare the Glory of God.” He donated land on the hill where Marietta Middle School is today to Marietta College for a new observatory. He invited noted astronomers to speak in Marietta. Cisler reportedly drove to the Chicago to pick up a meteorite that had fallen in someone’s backyard in the 1930’s.

The Cisler and Son brickyard closed about 1930 after supplying brick for the Marietta High School building. He became involved in oil and gas production after that. 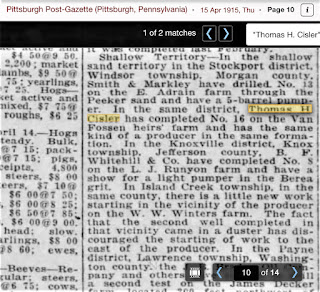 He left the City of Marietta land for what became Ephraim Cutler Street and land for a landscaped park which eventually was the site for the YMCA. He bequeathed a plot next to the Cisler Terrace home for a park. Marietta Civitan Club now maintains the park.

Dr. J. Glover Johnson, Professor of Religion at Marietta College, wrote in a tribute at Thomas H. Cisler’s death in 1950: “...Marietta will never forget Dr. Cisler, for he did so much for it and the life of its people.”

Lillian E. Cisler was Thomas H. Cisler's daugher born in 1903. She never married and lived at Cisler Terrace from 1947 until her death in 1993. Lillian was well educated, gifted in music, and deeply spiritual. She was well known locally for her unusual appearance (wore all black all the time), hitching rides, love of children, and the Bach festival. Her wearing of black dresses is explained by many as a memorial to her father. Others aren’t so sure. One plausible explanation was that she had limited funds for a wardrobe; black dresses were economical and could be worn for all occasions.

Lillian met Albert Schweitzer, then a renowned physician, musician, and theologian, while at Northwestern University. They shared a love for science, religion, and Bach's music. They maintained a correspondence for many years.

Lillian possessed a encyclopedic knowledge of history - about the Cisler family, brick making, and the Marietta community. The late Jerry Devol, himself an expert local historian, lamented, “How negligent we were not to have interviewed and queried Miss Cisler about her family, her church, the Cisler Brick Co., and Marietta history in general.” 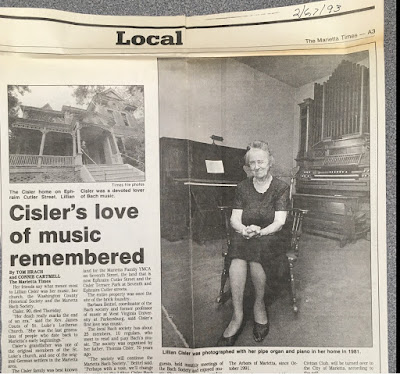 Marietta Times article about Lillian and her love of music. She is pictured in the Cisler Terrace home with the organ and piano in the background. (clipping courtesy of Marietta College Special Collections) CLICK TO ENLARGE

Miss Cisler was truly a multi-faceted personality.
Locals have many fond memories of her; some quotes from various people in Facebook posts: “Loved that eccentric old gal, one of a kind, one of the best story tellers, always wore black, lonely but very nice, nice but eccentric, her father’s hat and cane were on the table, gave her rides, a little creepy, pretty pushy - jumped into my car, eccentric...but I liked her, I remember general decay of that fine old home, I played for the Bach concert, quite a hoot to talk to.”

Most people respected her and overlooked or tolerated the eccentricities. Mary Hoye Antons said “There was so much more to this lady who always dressed in black and begged for rides...” Dale Wagner was a Civitan Club member who assisted in creating the public park at Cisler Terrace. About Lillian, he said “As far as I’m concerned, she was really a brilliant lady. I thought a lot of Lillian and that’s why we wanted to complete this park for her.” He hoped that the park would keep alive the memory of her and the Cisler family.

She died in 1993. The home sat vacant for several years. It fell into severe disrepair. Dr. Jesse and Laurie Ada purchased the home and restored it. It once again became the beautiful home that Thomas Cisler created in 1886. The home, grounds, and history are testimony to a remarkable family, one of Marietta’s many latter day pioneers.

*The original family name also appears in some records as “Zeiszler.”