Marietta resident Amos R. Harvey wanted to renew his liquor/tavernkeeper license in 1811. He figured it would be routine. But there was a glitch. A group of prominent citizens filed a petition recommending that his license not be renewed.

He had presumably been in the tavern business for a while. Taverns at that time were an important public institution; much more than a neighborhood bar. Taverns offered food, liquor, entertainment, and lodging. Public meetings and social gatherings were held at taverns. There were often “spirited,” if you get my drift, debates about issues of the day. The Ohio Company of Associates which founded Marietta held its initial meetings at the Bunch of Grapes Tavern in Boston. Taverns in early Marietta served locals and also visitors traveling on the Ohio River.

The petition was filed with the Court of Common Pleas which had to approve the renewals. It stated: “...Amos R. Harvey has kept a house of such a character as is a public disgrace to the town of Marietta and such as tends to corrupt the public morals and serves only as a rendezvous for practising those vices and that species of licentiousness and laciviousness which demoralize and debase mankind and strike at the root of all decency and virtues in society...(the petitioners) pray the honorable court,...as the guardians of the public morals in this respect, to refuse a license to the said Harvey.

The petitioners were plainly upset with Harvey and invoked some powerful vocabulary to make their case. The original documents pictured in this article belong to Bill Reynolds, historian at Campus Martius Museum, and are used with his permission. The twenty-two signers of the petition included prominent names such as David Putnam, Timothy Buell, Gilbert Devol, Benjamin Ives Gilman, Samuel Hildreth, Ichabod Nye, Dudley Woodbridge, William Woodbridge, Griffin Greene. 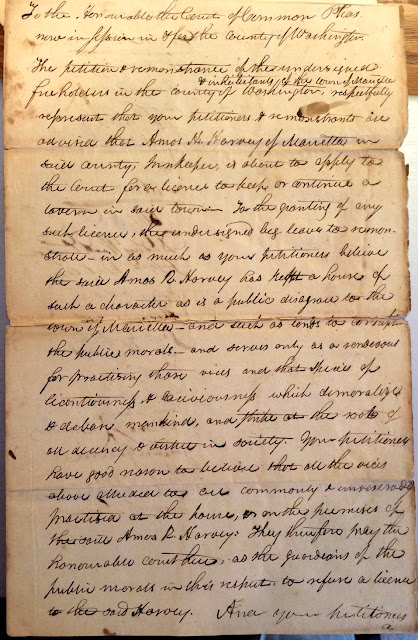 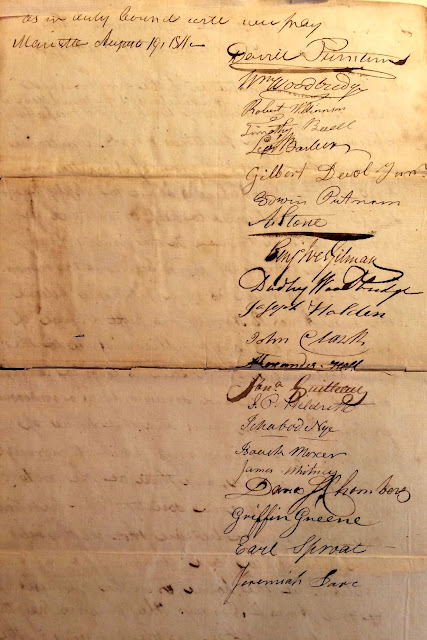 There are two sides to every story. Amos Harvey had a group of supporters who also filed a petition, shown below, in his favor. It stated “We...do hereby recommend Amos R. Harvey as a suitable person to keep a house of public entertainment or tavern at his house in said Marietta.” Twenty persons signed that petition. 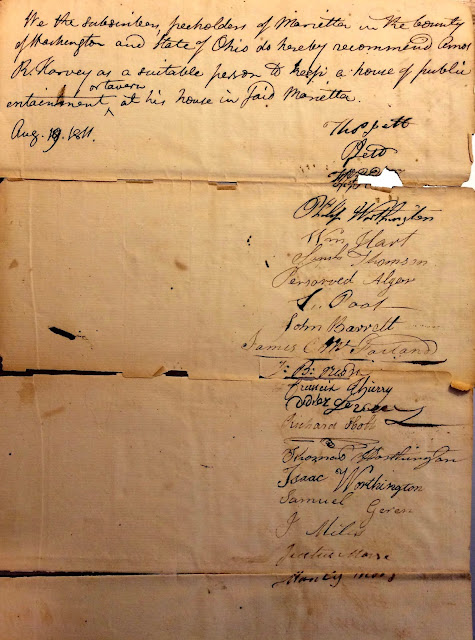 The original licensing law adopted by the Northwest Territory in 1792 required the applicant to be “well qualified in person and character....”  A later version of the law in 1809-10, after Ohio became a state, dropped the character requirement per se but specified other conditions: No licensed person “shall knowingly allow...betting or gaming....or shall suffer any disorder, revelling or drunkenness therein.” Also, “All tavern-keepers and inn-keepers shall provide and furnish good entertainment and accommodations for man and horse..... ”

The Court of Common Pleas had to approve applications and renewals for a tavern-keepers license. On the first day of each Court term, a grand jury was convened. They were given a list of all license holders and directed to “make inquiry and to give information about violations of this act...” Their report could influence the renewal of licenses by the Court.

I was not able to learn whether Amos Harvey’s license was renewed in 1811. But he was listed as a tavern-keeper by George Woodbridge* in the 1820s. So his license must have been renewed at some point. He may have toned down the alleged immoral practices in his tavern, though based on prevailing practices at the time, maybe not.

Want to know more about how a real tavern operated? Stop at Our House Tavern in Gallipolis, Ohio, a restored 1819 tavern that hosted General Lafayette when he visited in 1825. To learn more, click here.

The Statutes of Ohio and of the Northwest Territory from 1788 to 1833 Inclusive, Volume I, edited by Salmon P Chase, Cincinnati, Corey & Fairbanks, 1833 viewed at archive.org

Images of original documents from Bill Reynolds - petitions opposing and in favor of tavern license renewal for Amos R. Harvey dated August 19, 1811
Posted by David Baker at 11:42 AM