The Ohio Company: A Developer with Heart

Note: quotations (including spelling and grammar) unless otherwise noted are from the Ohio Company of Associates' documents, primarily minutes of Directors' meetings.

Marietta, Ohio was the first settlement (1788) in the first United States territorial expansion (Northwest Territory, 1787) beyond the original thirteen states. It was a gateway to western expansion of our nation. You knew that, right?

It is easy to overlook that this complex and risky project was undertaken by private enterprise. The Ohio Company of Associates ("Ohio Company") was a group of investors who put up their own money. They purchased 1.5 Million acres from the Continental Congress in what is now southeast Ohio - worlds away from their native New England. The land purchase was negotiated in a weekend by the affable and shrewd Manasseh Cutler. But that's a story for later. 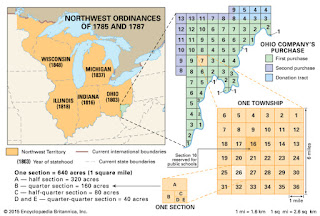 Map of the Northwest Territory with detail showing the Ohio Company purchase in what is now Southeast Ohio. CLICK TO ENLARGE. There were no states at the time (1787); dates show when states were later admitted into the Union. Map is from Encyclopedia Britannica, viewed at https://www.britannica.com/event/Treaty-of-Greenville

Many early land development companies were focused mostly on profits for wealthy investors. For example, the Connecticut Land Company was formed in 1795 to generate profits to investors from land sales in the Connecticut Reserve lands in what is now northeast Ohio. Investors included 57 of the wealthiest and most prominent men in Connecticut.

Speculation with borrowed money, fraudulent claims, and inept management were common with many land companies. One shameful example was the Scioto Company which sold land it did not own to French settlers in 1790. Purchasers of land and others, including the Ohio Company, suffered losses. The Yazoo Land Scandal in Georgia involved outright fraud in a massive land sale to politicians at preferential rates. There was a public outcry and years of legal proceedings. The Federal government eventually settled claims of purchasers.

The Ohio Company was indeed a developer with heart. It was founded on ethical principles with genuine concern for the well being of investors, war veterans, employees, and residents. It also went far beyond selling land and actively helped manage the settlements it began. President Franklin Roosevelt nailed it in his 1938 Marietta speech when he praised the Ohio Company as ..."an organized society, unafraid to meet temporary adventure, but serious in seeking permanent security for its (settlers)."

The benevolent concept was evident in the original newspaper advertisement about formation of the Ohio Company on January 25, 1786, titled "Information." Essentially, it invited everyone, including "...All Officers and Soldiers who have served in the (Revolutionary) War....and also all other good Citizens who wish to become adventurers in (the Ohio Country)." 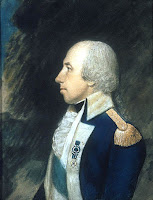 Rufus Putnam Portrait from Wikipedia
Rufus Putnam was Superintendent of the Ohio Company. He had an impressive background: self educated, apprenticed as a millwright, served in the French and Indian War (nearly died when his unit became lost), became a surveyor, was an engineer in the Revolutionary War. Putnam was an effective leader who started the Ohio Company and established the settlement at Marietta. He later served as Surveyor General of the United States, Judge of the Territorial Court, and a trustee of Ohio University.

The Articles of Agreement of the Ohio Company provides further indication of its nature.

The minutes of Ohio Company proceedings refer to many other actions to encourage participation and assure fair treatment of all.

Investing in the Ohio Company 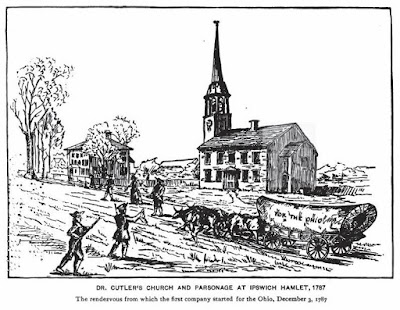 Departure of Ohio Company pioneers bound for Ohio from Manasseh Cutler's parsonage at Ipswich MA on December 3, 1787. Cutler had the wagon prepared and the lettering placed on the side. When the party reached Sumrill's Ferry, PA, the wagon was dismantled and boats were built for floating the party down the Ohio River to Marietta.
Photo is from a book by Edwin Erle Sparks: The United States of America, Part 1
https://en.wikipedia.org/wiki/Manasseh_Cutler_(representative)#/media/File:DepartureOfThePioneers.jpg

Campus Martius (Latin name given by the Ohio Company meaning "Field of Mars," perhaps named for a sector in ancient Rome or invoking reference to Mars, Roman god of war). It was a fortified residential community. Image from ohiohistory.org.

Help for the those in need

A teacher and preacher

Preservation and beautification of Hopewell earthworks

Encouragement of necessary businesses and services

There was much more that the Ohio Company did to help its stakeholders. Archer Butler Hulbert, Professor of American History at Marietta College, edited The Records of the Original Proceedings of the Ohio Company. He captured the essence of The Ohio Company's role: "The relationship of the Ohio Company of Associates to the first men and women of Ohio was uniquely unselfish and thoroughly American. No land Company in America can match its record as a public servant in laying the foundation of an American State."


Sources:
Hildreth, Samuel, Pioneer History: Being an Account of the First Examinations of the Ohio Valley and the Early Settlement of the Northwest Territory, Cincinnati, H. W. Derby & Co., 1848, Pages 162, 214-215, 505