Stopping by the Woods on Snowy Afternoon

This Early Marietta blog is usually about events decades or centuries ago. But history is made every day. This article is about history made on January 12, 2018 - nothing exciting or earth-shaking - just a mostly ordinary day.

It was time for the afternoon dog walk with our two Old English Sheepdogs. Sophie is technically a puppy at 7 months, though she now weighs 50 pounds. Tess is the veteran, a spry 11 year old. We walk them on trails in the woods on our property.

It's normally pretty routine, but not today. The temperature is 19 degrees and there is 6 inches of fresh snow on the ground. It reminded me of early settlers who survived winters without central heat, heated vehicles, down coats, and high tech boots. It also brought to mind Robert Frost's famous poem "Stopping by the Woods on a Snowy Evening," though it was not yet evening.

The day before it was 65 degrees, and it seemed as though flowers would literally shoot up out of the ground. Old Man (Lady?) Winter said Bah! Humbug! Back to the deep freeze.

I bundled up with several layers, hats, and boots. The dogs paced around impatiently. We stepped out into the powdery snow. It was beautiful despite the cold and difficult walking. Some dark-eyed juncos and a bright cardinal flitted around the bird feeder. Otherwise it was quiet, possibly because I couldn't hear anything with all of the head gear I had on.

The dogs (I refer to them as "the girls") lead the way as usual. Suddenly Sophie took off running, spinning up clouds of powder in her wake. I scanned the woods ahead and immediately saw two white tails up. Deer. They bounded gracefully out of sight. Sophie soon broke off the chase and resumed a more normal pace. She scampered into a brushy area and left a solid waste deposit.

Snow highlights everything. The hillside opposite the creek is normally a muted gray and brown color in winter. Today the hill stood out in bright contrast. Tree trunks and a thousand branches from leafless underbrush stood out clearly. A bench offering a snowy vista beckoned. Maybe later. 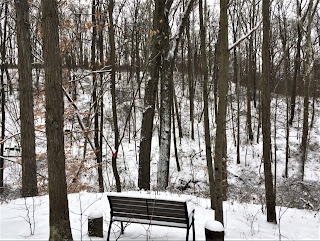 This and other photos by the author

In the black and white scene, even bland colors like leaves on a holly tree and a beech tree stood out. 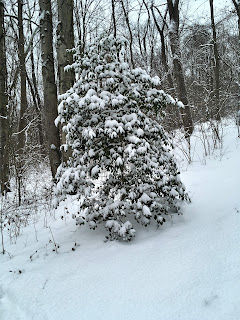 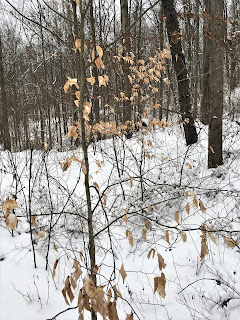 We walked down along the creek. It gurgled softly with runoff from rain and earlier snow melt. We passed the bridge to the opposite trail; it was studded with animal tracks. 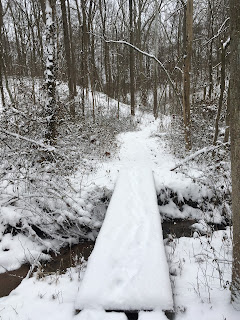 The girls ambled along the trail. Tess, as she often does, took a different trail which runs just above where Sophie and I were. The two spy out each other, turning it into a game. At the waterfall, a lone log washed there in a recent downpour perched on the edge. The roar of the falling water behind the ice could be heard a long distance. Impressive. 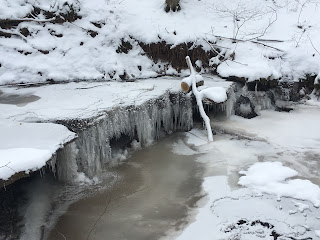 On the return trail, things were pretty tame. Snow is new to Sophie; she likes to push through it with her nose. 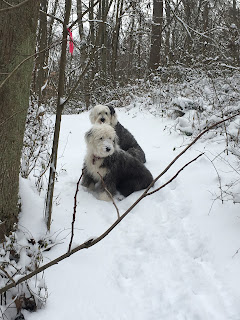 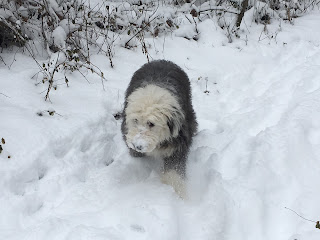 Both dogs ambled along together, pausing for scents real and imagined. They reminded me of two panda bear cubs foraging along the trail. 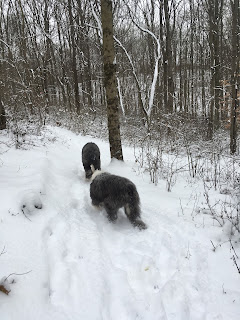 I had my phone with me to take the pictures shown here. Near the end, the cold shut it down. The battery level showed 10% before the screen turned red then blacked out. My hands were were reacting to the cold about the same way even with liner gloves and heavy ski gloves.

The girls went through their usual playful run-around with each other as we approached the house. I ducked inside for warmth and a costume change. Soon they were in, de-iced, dried off, and resting near the glowing fireplace. The locust logs that my grandson Connor had cut before Christmas were burning like coal - slow and hot.


Life was mostly good that day, even with the annoyance of shoveling and the cold. This few minutes of history will linger pleasantly and be recollected often if I can remember how to transfer the photos to my digital picture frame. I make a point of recalling these extreme weather moments when conditions are at the opposite extreme - such as next summer on a humid 95 degree day.
Posted by David Baker at 11:31 AM