The bell - if only it could talk. It hangs quietly at Campus Martius Museum in Marietta, Ohio, next to the Rufus Putnam House. I’ve passed it dozens of times giving tours of the house. A few visitors ask about it; most pass by unaware of its presence. 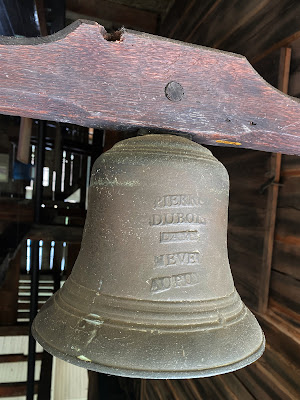 Stories have circulated about the bell and how it got here. Marie Antoinette, Queen of France, was said to have sent a bell to Marietta, in appreciation for the town’s being named for her. The bell never made it, the story goes; the ship carrying it from France sank. This is a captivating narrative, but it’s never been verified.
It’s a small bell - 7” high and 8” wide at the base - what might today be called a dinner bell or farm bell, not the kind you expect to see in a church or court house bell tower. Would a bell like that have been used at the Campus Martius fortification? Though the bell is small, its ring sound is bright and clear. It could be heard for a few hundred yards when rung outdoors in the relatively quiet (no noise pollution from traffic, etc.) frontier times.
Where did this bell come from and where was it used? The bell itself gives part of the answer through the inscription on it, appearing from top to bottom:
PIERRE
DUBOIS
LAMY
NEVEU
AUPUY
Bells with this type inscription were made at the Dubois bell foundry in Le Puy en Velay village in France. Jean Dubois (1667-1725) established the foundry in the early 1700s. 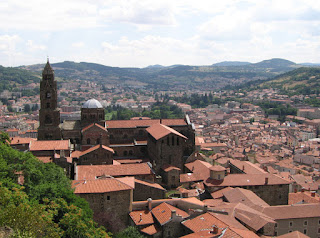 Le Puy en Velay village in south central France
Decoding the bell’s inscription helps us identify the Dubois family member who made the Campus Martius bell.
PIERRE  )
DUBOIS ) -  shortened name of foundryman Jean-Pierre Dubois (1716-1792), grandson of Jean Dubois Dubois, the original founder.
LAMY - Jean-Pierre Dubois married Agathe Lamy in 1764. Her name appears on bells attributed to Jean-Pierre made after that date.
NEVEU is French for “nephew.” This acknowledged the family affiliation of Jean-Pierre Dubois with his uncle Louis-Gabriel Dubois (1697-1767). NEVEU may have been included to avoid confusion with his uncle or to document the family connection for authenticity as a Dubois foundry bell.
AUPUY - the meaning of this term as used in the inscription is not clear. Other Dubois bells have this name, possibly referring to the name or location of the foundry.
OTHER IMAGES ON THE BELL: Some of Jean-Pierre Dubois’ bells have fleur-de-lis symbols. One image on this bell is similar: 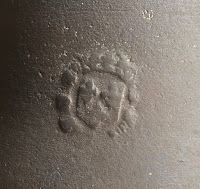 Photo by author of bell fleur-de-lis feature
Clues in the inscription suggest that the bell was likely made at the Dubois foundry in France by Jean-Pierre Dubois, in the late 1700s. The patina of the bell matches the time period.
Questions remain: how and when did it arrive in Marietta and where was it used?
The Marie Antoinette origin has not been documented, though the bell was made in France during the period that included her reign. She was queen from 1774 until 1789 and was beheaded in 1793.
The most explicit reference to a bell being given to Marietta appears in minutes of a meeting of the
Ohio Company dated July 2, 1788:
“Upon information from Col. John May that Mr. Joseph May of Boston had presented a Bell to the Ohio Company, for the first public building to be erected in the Territory of the Company and such building being ordered by the agents.
RESOLVED That the thanks of the company be presented to that Gentleman and that the Directors be directed to take measures for transporting it from Boston to the City of Marietta.”
A footnote on the page with this entry in the Records of the Original Proceedings of the Ohio Company, Volume  1, published by the Marietta Historical Commission in 1917, says: “This bell was placed on a corner blockhouse of the Campus Martius and now hangs in the Marietta Historical Museum.”
There is evidence that a bell was used at Campus Martius. Hildreth’s Pioneer History states that “On the top of the fourth (blockhouse) (in the north-west corner), above the watch tower, is a balcony with a cupola, spire, &c., for the reception of a bell, which we are told is coming on as a present from a gentleman at Boston.” 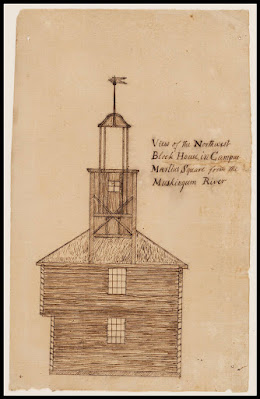 Detailed drawing of cupola for the bell (though the bell is not shown) on the Northwest blockhouse at Campus Martius. This is a copy of an original drawing from digital records at Marietta College Legacy Library - Special Collections.
Illustrations below of the Campus Martius structure from that period show an extended tower on the northwest blockhouse. This was likely the bell cupola. 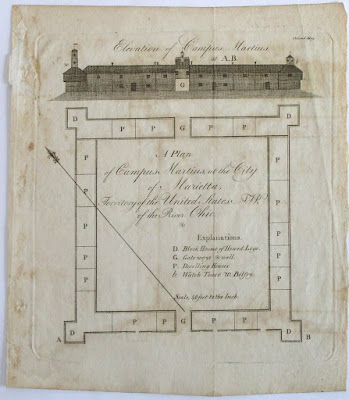 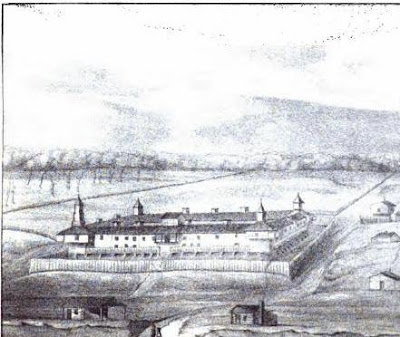 Period drawing of Campus Martius fortification ca 1789-90. The left front corner blockhouse tower is noticeably taller.
A bell is mentioned at Marietta’s centennial celebration in 1888. A list of relic items displayed at the armory for the centennial celebration was printed in The Marietta Times, July 19, 1888 edition. It includes: “59. Old bell used in Campus Martius….”
There is no explicit reference in histories, journals, or documents that I have seen about the bell’s having been installed and rung at Campus Martius. But based on what we know, the most plausible scenario is summarized by Bill Reynolds, Campus Martius Museum historian: “I am convinced this is the bell sent to the Ohio Company (at Marietta) from the gentleman in Boston and was installed in the blockhouse for calling alarms and for assemblies such as church and court or mourning an important death.” He also believes that the same bell was used in the courthouse after Campus Martius was dismantled until the “Davidson” bell (on display at Campus Martius Museum) was installed in 1802.
This is our story, and until other explanations surface, we’re sticking to it. If you know anything about the bell or have questions, let me know.
Note: special thanks to Bill Reynolds for his suggestion of the bell history as a blog topic and for his input in the article.
Sources:
Hildreth, Samuel P., Pioneer History
Historical Marietta blog, November 21, 2021, “Relic Department, Marietta Centennial Celebration, Marietta Times, June 19, 1888,” viewed at historicalmarietta.blogspot.com.
Marietta Historical Commission, Records of the Original Proceedings of the Ohio Company, Vol I, 1917
Reynolds, William, Historian at Campus Martius Museum, personal interviews
Sonailles.net, “Dubois-au-puy,” viewed at https://www-sonnailles-net.translate.goog/index.php/histoire/fondeurs-et-forgerons/les-dubois?_x_tr_sch=http&_x_tr_sl=fr&_x_tr_tl=en&_x_tr_hl=en&_x_tr_pto=sc
Posted by David Baker at 6:52 AM