Becky Thatcher and the Dreamers

Becky Thatcher and the Dreamers

Sounds like a Sixties rock and roll group. But we’re talking about the steamboat BECKY THATCHER and the dreamers who kept her active for over 80 years. Thirty of those years were in Marietta. She had two phases of her long (for a steamboat) life: the Public Servant and the Entertainer.
Dreamer: one who has ideas or conceives projects regarded as impractical; a visionary. Each of the BECKY’S “dreamers” wanted to make the boat the best it could be, often against long odds.
The Public Servant
Here she is, in her first life as the MISSISSIPPI III, a workboat and inspection craft for the Mississippi River Commission. What a striking vessel, with crisp lines and bright colors, “shining like a birthday cake,” as her captain, David Cook, described her later. 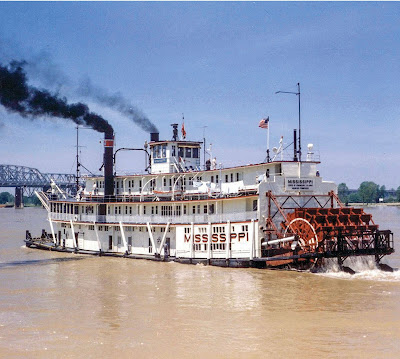 Photo from Waterways Journal November 29, 2021
Her birth as the MISSISSIPPI III was unconventional for a steamboat. Steamboat historian Keith Norrington explains in a Waterways Journal article:
The last of a line of government steamboats to carry the name the Mississippi had an unusual beginning. A new steel hull, constructed by the Howard Shipyard at Jeffersonville, Ind., in 1926 and measuring 185 feet in length by 38 feet in width, was towed to Paducah, Ky. Waiting at the Ayer & Lord Marine Ways were the remains of the second Mississippi (Mississippi II), formerly the towboat Leota. The upper works of the retired boat were then “scooted” over onto the new hull, which included totally new main deck bulkheads, boilers and engines. Reportedly, the only casualty of the ticklish operation was a broken pane of glass in a door on the texas deck. 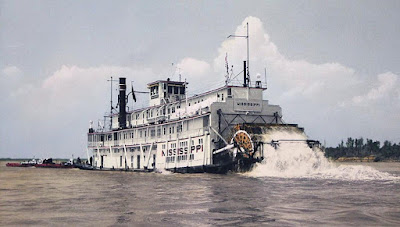 She was born a hybrid of old and new. She also had a hybrid function - as a “packet” (passenger) boat and a “towboat” (workboat). The MISSISSIPPI III spent most of her time working - moving barges, equipment, and supplies for the Mississippi River Commission. She could also have fun, so to speak, conducting river inspection tours for the Commission members and serving as a “floating ambassador for the Corps of Engineers.” That meant that she hosted politicians and dignitaries - in first class style.
MISSISSIPPI III’s long serving Captain David Cook was one of the dreamers - not in an impractical sense, but in his absolute dedication to “his” ship.  He was so proud of her first class appearance. In the 1950’s, MISSISSIPPI III answered a distress call from the cruise boat DELTA QUEEN which had mechanical problems. MISSISSIPPI III towed the DELTA QUEEN to Natchez. Captain Cook invited her passengers aboard the MISSISSIPPI III for a tour. One visitor observed that “everything gleamed with cleanliness and polish.” 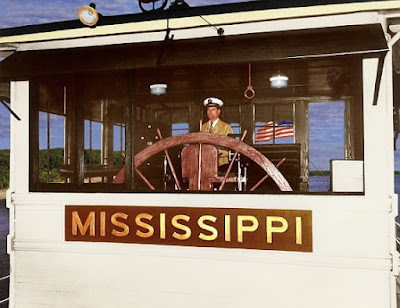 Captain David Cook in the wheelhouse of MISSISSIPPI III. Photo from steamboats.com, Dave Thomson Collection
A testimonial at his passing in 1963 captured the essence of this man, the last of the MISSISSIPPI III’s captains:
He was the last of his kind, a riverboat skipper who could have followed no other career because he was…born to two precious generations of river men. He had learned the secrets of the Mississippi (River) - and its tributaries - before other boys were out of high school…Generals and congressmen…knew him as a perfectionist in the wheelhouse and an old-school gentlemen in periods of relaxation.
The Entertainer
Frank C. Pierson was the dreamer who began the BECKY THATCHER’s entertainer career on the St. Louis riverfront. The BECKY would bring entertainment, education, economic benefit, and work experiences to thousands of people over the next 50 years.
Pierson was a former advertising man who migrated to riverboat entertainment. In 1964 he bought the venerable showboat GOLDENROD which continued to offer melodramas and other shows. He purchased the MISSISSIPPI III in 1965 which he renamed BECKY THATCHER II1. After a lengthy remodeling, using borrowed money, the BECKY opened in 1968 with a restaurant and riverboat museum.
Frank Pierson recruited another dreamer, river historian and educator Ruth Ferris, to manage the Midship Museum on the BECKY THATCHER. She was the recently retired curator of the Missouri Historical Society’s River Room. Ruth jumped at the opportunity and recalled it as the highlight of her river history career.  Being on the BECKY THATCHER “looking out…. at the mighty Mississippi…Eads Bridge and….the magnificent Gateway Arch made my thoughts and spirit soar above everyday things,” she said. Many students from her 35 year teaching career visited the Museum. One of those students was the late singer/song writer John Hartford. He wrote a song about her, “Miss Ferris.” It explains how she imparted love of the river to a restless kid.
First verse of “Miss Ferris”:
Now I had a teacher when I went to school
She loved the river, and she taught about it too
I'se a pretty bad boy, but she called my bluff
With her great big collection of steamboat stuff
Oh, yeah….. 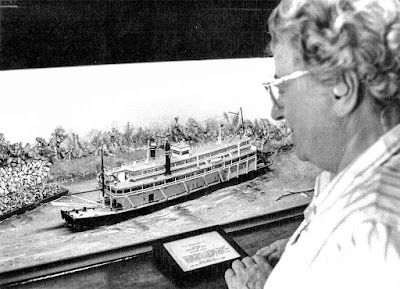 Midship Museum curator Ruth Ferris looks at a model of the Str. Mississippi III. (Keith Norrington collection). Ruth was proud of the museum, “This is the real thing; a riverboat museum on a riverboat on a river!” From Waterways Journal May 17, 2021 article by Keith Norrington
Frank Pierson was a master at filling seats, producing shows, and making things happen. People loved the river setting and old time entertainment.  He was the waterfront’s greatest promoter.  The BECKY THATCHER with her imposing profile complemented Pierson’s other venues. St. Louis Post-Dispatch columnist Jack Rice called Pierson “Quixotic,” but showcased his many projects on the St. Louis waterfront in a January, 1967 article. 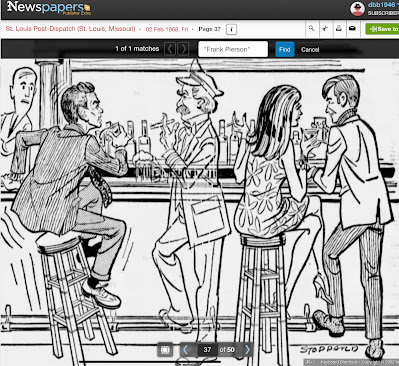 Cartoon caricature of Frank Pierson with an imagined Mark Twain whom a columnist thought would be at home on the St. Louis waterfront with Pierson’s riverboats. St Louis Post-Dispatch 2/2/1968 viewed at newspapers.com
However, his riverboat venues were a constant struggle:
Frank Pierson relished the challenges. Columnist Rice: “He seemed to shoulder these responsibilities well, and almost always cheerfully.” He was a dreamer who got things done, a visionary always looking forward, whose BECKY THATCHER brought entertainment to thousands.
The BECKY THATCHER era in St. Louis ended in 1975. Frank Pierson’s bank foreclosed on the BECKY THATCHER in May, 1974, because of past due loans. Legal wrangling ensued; public accusations filled the media. The BECKY herself became a melodrama reality show. It was hard to tell the villains from the heroes. In end, the BECKY THATCHER was sold to interests in Marietta, Ohio, in 1975.
Marietta, Ohio dreamers
Only a dreamer would bring a riverboat to a small market like Marietta, Ohio. The maxim “a boat is a hole in the water that you pour money into” comes to mind. Your author was present on the BECKY THATCHER when a Marietta Industrial Enterprises tow boat brought her to an excited Marietta community. Two years later a remodeled BECKY began her new career in Marietta. There were melodrama shows in the summer, a restaurant, a bar, and meeting room for events. 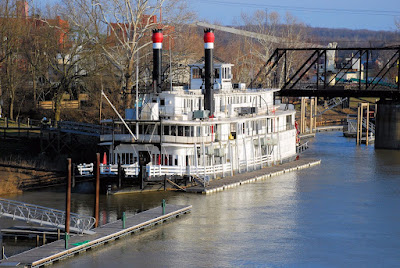 BECKY THATCHER moored in Marietta ca 1980’s. Photo by Bruce Rea, from steamboats.com Keith Norrington Collection
The BECKY was a hit. Locals were proud of this addition to the town’s river heritage. Bus loads of tourists flocked into town to experience the revival of melodrama shows. Audiences really got into it, robustly cheering the hero and booing the villain. They loved the intermission “olios,” songs and comedy skits performed between acts of the show. It was very rewarding for those involved with the BECKY THATCHER. 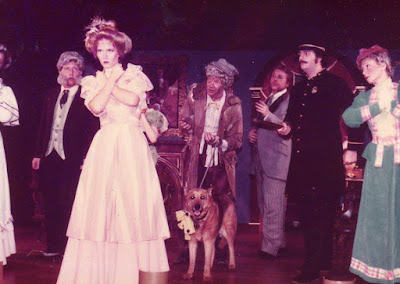 Becky Thatcher cast in 1981. Picture from Celia Peth-Gilroy. Now Celia Bills. Viewed on Facebook Showboat Becky Thatcher Alumni page
There were multiple dreamers that kept the BECKY THATCHER going in Marietta for more than 20 years.
To use a lame mixed metaphor, it was a Marietta “dream team” who kept the BECKY “afloat” and active.  Tens of thousands benefited from her presence in Marietta over nearly 30 years.
The final BECKY THATCHER dreamer was Jeffrey Levin who bought the BECKY from Marietta and moved it to Pittsburgh. An article in the Pittsburgh Post-Gazette October 14, 2009 explained his plans: “Mr. Levin is hoping for a fresh start for The Becky Thatcher, returning it to its recent status as a riverside bar and restaurant. ‘I'd like to bring it back up to its grandeur," Mr. Levin said yesterday, ‘….potentially, a restaurant could be up and running within a week.’ "
Those plans did not materialize quickly enough. In late February, 2010, the BECKY THATCHER sank at Neville Island and could not be salvaged. It was a sad end for an 84 year old boat with a wonderful history.
At the end of each theater show in Marietta, there was a song which the whole cast sang at the curtain call. The final verse appears below; everyone left the BECKY THATCHER in a positive frame of mind. That spirit is the legacy of the BECKY THATCHER (née MISSISSIPPI III).
So trust that the Becky Thatcher
Will always banish sadness and strife,
She'll be here always with people smiling
Who try to find the sunny side of life!!!
1 Frank Pierson’s original BECKY THATCHER sank; so this boat was a successor. But mostly she was known as the BECKY THATCHER without the “II”. But the hull of the original boat became a landing barge/boarding platform for the BECKY THATCHER. Your author walked across that barge many times.
2 Quote from St Louis Post Dispatch article November 20, 1988, by Joe Pollock.
3 There were at least two dozen actors, crew and office staff who each year ran the theater. Many of these went on to careers in fine arts.
Sources:
Barlow, Janet Herman, personal interview 8/7/2022
Flickr.com, photos, “Getting through the RR Bridge,” posted by Mike, 10/14/2009
“John Hartford Performs ‘Miss Ferris’ on a Steamboat,” youtube.com
Majors, Dan, “Riverboat owner to float restaurant idea on river here,” Pittsburgh Post-Gazette, 10/14/2009
Majors, Dan, Historic riverboat sinks in Ohio River, Pittsburgh Post-Gazette, 2/23/2010
Newspapers.com, numerous articles about the topics mentioned in this post
Norrington, Keith, Waterways Journal, articles dated 11/8/2019, 5/17/2021, and 11/29/2021
Norrington, Keith, steamboat.org post 8/15/2008
Pollock, Joe, “Death of Impresario is Loss for Theater in St. Louis,” St. Louis Post Dispatch, 11/20/1988, viewed at newspapers.com
Rice, Jack, “Down on the Levee, a Vintage Bar,” St. Louis Post-Dispatch, 1/29/1967, viewed at newspapers.com
“Showboat Becky Thatcher Alumni” Facebook group page
“Showboat catching on, backers say,” Chillicothe OH Gazette, 12/27/1978.
Steamboats.com, Dave Thomson Collection, Photos and narrative of the Becky Thatcher
The Commercial Appeal, St. Louis, “Capt. David M. Cook,” opinion page tribute, 9/29/1963
Wikipedia, “MV Mississippi”
Posted by David Baker at 5:39 PM