The path to Ohio statehood was marred by bitter politics and…..mob violence. Such were the passions inflamed by stark differences of political opinion. Civic leaders from Marietta and Washington County were in the thick of it.

Discussion of statehood began in the late 1790’s. What is now Ohio was then part of the larger Northwest Territory established in 1787, a vast expanse bounded by the Ohio River, Great Lakes, and Mississippi River. The Ohio area had grown the most and was approaching the 60,000 population level needed for statehood. 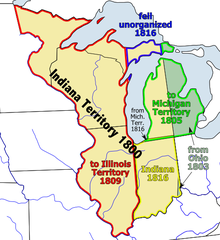 The Original Northwest Territory created in 1787 included the area marked on this map plus all of Ohio and Michigan. In 1800 the territory was partitioned; land west of Ohio and the western half of Michigan became the Indiana Territory. The eastern Michigan area did not become part of Ohio, the state. Michigan became a separate territory before becoming a state later. Viewed at Wikipedia.com
Proponents of Ohio’s becoming a state were led by Thomas Worthington, Edward Tiffin, and other influential leaders. They believed statehood would bring good things:
Arthur St. Clair had been a respected patriot and a distinguished Revolutionary War veteran. In 1787 he was President of the Continental Congress and was appointed Governor of the new Territory. Judge Jacob Burnet described St. Clair as “a man of superior talents, of extensive information, and of great uprightness of purpose….” But he became imperious and inflexible in his governing. He demeaned his territorial residents as “A multitude of indigent and ignorant people (who are) ill-qualified to form a constitution and government for themselves…” St. Clair was out of touch with the changing attitudes in the territory. 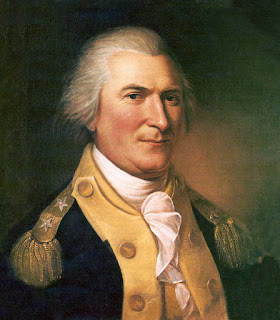 Major General Arthur St. Clair. Portrait by Charles Wilson Peale c 1783. Viewed at Wikipedia.org
Statehood opponents, including people at Marietta, said: not so fast. They realized becoming a state was inevitable. But not now. Statehood would mean higher taxes - with little benefit. Besides, Federalists, the party of most anti-state opponents, were in the minority. Locals would therefore have little influence and be overlooked. Better to wait.
Local opposition became quite animated in 1801. There were a series of township meetings where statehood was “fully discussed and strongly opposed.” An “anti-state” meeting was held in Marietta on June 18, 1801, chaired by Gilbert Devol and Joseph Barker. Barker gave a spirited address in opposition to becoming a state now. This resolution was passed:
RESOLVED, That in our opinion it would be highly impolitic and very injurious to the inhabitants of this territory to enter into a State government at this time. Therefore, we, in behalf of our constituents, do request that you would use your best endeavors to prevent and steadily oppose the adoption of any measures that may be taken for the purpose.
Conflict about statehood boiled over when the territorial legislature met in Chillicothe in November, 1801. Two legislative acts ignited controversy. First was passage of a resolution, originally proposed by Governor St. Clair, which would divide the territory so that Ohio east of the Scioto River would be a separate state. The population mix would give Federalists, and Marietta, more influence. It would delay statehood because the population was below the minimum 60,000 needed. And, possibly, Marietta could even be the capital. Washington County representatives William Rufus Putnam (son of Rufus Putnam) and Ephraim Cutler were in full agreement with the concept. 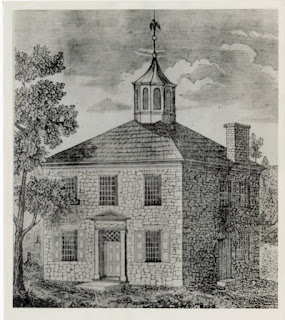 Statehouse at Chillicothe image. From ohiomemory.org - Ohio Guide Collection.
Territorial legislature meetings were held here. At least one observer at the time did not give the building a high rating: “The house (of representatives) occupied the large room on the ground floor, a very uncomfortable, badly lighted, roughly finished room, with a fireplace at each end…..the fires failed to heat the large room in the winter.”
This proposal aroused vehement opposition from statehood supporters, including Edward Tiffin, Thomas Worthington, Nathaniel Massie, and others. They lodged a formal written protest. A petition to the U. S. Congress was urgently circulated in Chillicothe and surrounding counties.
The Second legislative action was moving the territorial capital to Cincinnati from Chillicothe. This further enraged Statehood proponents, and Chillicothe residents in particular. There was talk of protests - even violence.
Thomas Worthington, Chillicothe political leader and wealthy landowner, and lawyer Michael Baldwin were political allies promoting statehood. Baldwin, though considered a brilliant lawyer, had a darker side: He led an “obnoxious,” “boisterous” group who were prone to civil disobedience.  Baldwin planned to lead his rabble to forcibly enter Governor St. Clair’s boarding house and drag him out to see himself burned in effigy -  as an insult and to intimidate him. This group headed out to the Governor’s boarding house on December 23, 1801. 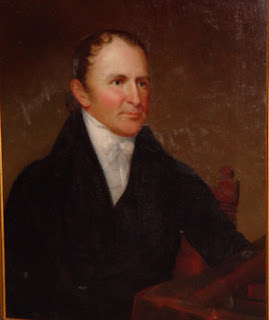 Thomas Worthington Governor’s Portrait
Viewed at ohiomemory.org
Worthington was passionate about statehood. He sought the limelight, leading efforts to forge a new state with exciting growth opportunities. He was a quintessential land speculator from Virginia, buying and selling land, often acquired from land grants sold by other Revolutionary War veterans. He had moved to the fledgling settlement at Chillicothe in 1798. Worthington became actively involved in business and politics of the area. In 1800, he was listed as owning 18,273 acres in the Virginia Military District located in south central Ohio.
Thomas Worthington was deeply religious. He was also pragmatic and had developed, even in his late 20’s, a keen political sensibility. He was alarmed to learn of Baldwin’s plan. He knew that violence was wrong - and counterproductive. It would harm the statehood effort and could even damage his own reputation. He had to act quickly. Worthington intercepted Baldwin and forcibly convinced him to stand down, threatening even to shoot him if he laid a hand on Governor St. Clair.
The next night on Christmas Eve Baldwin’s mob had mobilized again. They had been incensed upon hearing of William Rufus Putnam’s toast at a dinner that evening: “May the Scioto (River) lap the borders of two great and flourishing states” - a reference to St. Clair’s plan to split the state. Baldwin’s group forcibly entered a boarding house where Governor St. Clair and several legislators - including Putnam and Cutler - were staying.
That night the venerable, though disliked, Governor Arthur St. Clair was in his room, writing. There were so many issues that swirled in his mind. He was startled by a “violent noise” below. What could that be, he thought, not dreaming that his personal safety was at risk. Immediately he went downstairs to find a crowd shouting and jostling in the hallway. Many more were milling around outside. St. Clair was shocked to see mob leader Michael Baldwin strike Michigan1 representative Jonathan Schieffelin who promptly drew a dirk (a long handled knife) then grabbed two pistols and threatened to shoot the intruders. Schieffelin had become a target because of his outspoken support of relocating the capital to Cincinnati from Chillicothe. Sight of the pistols quieted the crowd. It also helped that Statehood leader Thomas Worthington was again present and defended Governor St. Clair.
St. Clair’s political instincts kicked in as the adrenaline faded. Don’t overreact, he thought, and don’t show any sign of being intimidated by the mob. He then circulated among those present, “calm and collected,” as Ephraim Cutler recalled, yet firm in telling them to disperse. He called for law enforcement. A deputy sheriff and magistrate appeared on the scene. The mob gradually faded away. Despite law enforcement’s first hand witness of the violence, mob participants never suffered any legal consequences.
Marietta area pioneer Ephraim Cutler, elected to the Territorial legislature in 1801, witnessed the violence. Cutler was the son of Manasseh Cutler, the ordained minister, medical doctor, educator, and scientist, who had provided valuable guidance in creating the Northwest Territory. Ephraim had farmed in Connecticut and held some civic offices. By the mid-1790’s, though, he was feeling unsettled. He had suffered losses in two different businesses. Future prospects in Connecticut seemed limited. His mind kept drifting to the land of opportunity in Ohio, which his father had extolled and where his younger brother had lived for a while. Ephraim’s wife Leah was in poor health. Moving to a warmer client was recommended for her, so they moved to Marietta in 1795. 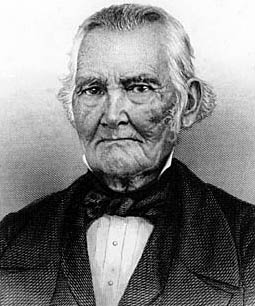 Ephraim Cutler portrait, from Wikipedia.org.
The legislative session in November, 1801 was Ephraim Cutler’s  first - and the Territorial legislature’s last. It was an intimidating yet beneficial learning experience for him. “We (Mr. Putnam and I) were the youngest members of the House….My inexperience led me to tremble at the responsibilities of the position, but the benefit of associating with…such men as Governor St. Clair, Judges Burnet and Sibley, and others….., was very great.” He roomed in Gregg’s house, where the mob violence took place. His memoirs did not mention any violence directed at him, though he was surely one of the targets because of his support for state-delaying measures.
A letter to Cutler from Dudley Woodbridge at Marietta gives additional perspective to the violent protests. “We met yesterday and had a meeting to consult on the proper steps to be taken to…..confront the doings” of those favoring statehood. Woodbridge also added in dismay, “We hear that mobs are around you….this, however, I cannot think is true. The present reminds me of Shays (Rebellion) and those times.”
Cutler noted in his memoirs, “the bill (to split the state and delay statehood) passed the legislature, but was of no avail; it rather caused those desirous of coming into a state to be more vigorous in their efforts.” For better or worse, Ohio was on the path to statehood. On April 30, 1802, Congress passed “An Act to enable the people (of Ohio) to form a constitution and state government and for the admission of such State into the Union…..”
Thomas Worthington had carried out his lobbying mission to Congress for statehood successfully. Randall and Ryan in History of Ohio: “In acknowledgment of his service he was received at his home with rejoicings and celebrations. Chillicothe was illuminated in his honor and bonfires burned brightly in expression of joy….” Those authors opined that despite further protests of opponents, “(their) efforts….to stem the tide of statehood were petty and partisan.”
Athough opponents’ efforts failed, their concerns about taxation were validated. Historian Samuel Hildreth stated in his biography of Joseph Barker (mentioned above as a vocal opponent), “the apprehensions of the evil results (of statehood) to the Ohio Company settlers, were soon realized, as the taxes for support of the new government fell heavily on them….”
The initial property tax structure was oppressive for rural areas because it was based mostly on acreage not value. If that system were in place today, an acre of rocky hillside would be taxed at a similar rate as an acre of prime real estate at an interstate highway interchange. The current fairer ad valorem (tax based on market value) tax system in Ohio was adopted in 1825. It was championed by the same remarkable, unassuming Ephraim Cutler who 24 years earlier had “trembled at the responsibilities” of being a legislator but was not swayed by the mob violence in Chillicothe.
1 The original Northwest Territory was partitioned in 1800 to create the Indiana Territory. The residual Ohio portion included the eastern half of Michigan, thought that part was not included when Ohio actually became a state.
Posted by David Baker at 4:17 AM