In June, 1792, future Governor of Ohio Return Jonathan Meigs, Jr. encountered a large snake as he was walking near Marietta. He shot it but didn’t reload his rifle - a careless oversight that nearly cost him his life. Meigs was twenty-something at the time, a Yale College graduate and lawyer who had followed his father to the new settlement at Marietta in 1788. 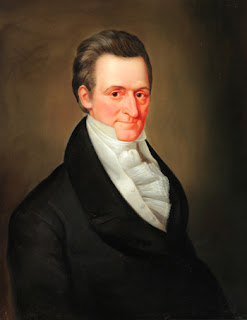 Return Jonathan Meigs, Jr. portrait. From ohiostatehouse.org. Ohio governor 1810-1814. Artist unknown.
It was a warm, humid, breezy day. Meigs, a hired man named Joseph Symonds, and black (mulatto?) servant boy Jim had been working in a field near Fort Harmar. At dusk, they started for home at the Campus Martius stockade. They were soaked with perspiration, waving away pesky mosquitoes as they trudged the narrow path along the Muskingum River to their canoe. A large snake crawled in front of them. Meigs shot the snake with his musket. No need to reload, he thought; no Indian in their right mind would be this close to the well defended Fort Harmar and Campus Martius stockades. 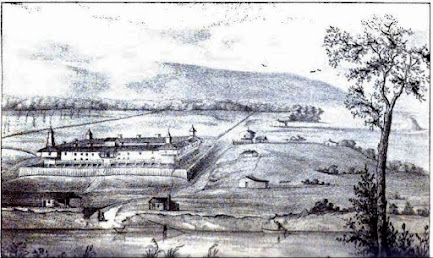 Campus Martius, a fortified residential community, viewed from across the Muskingum River near where Meigs was attacked. The river appears at the bottom of the image. Areas behind and to the right of Campus Martius were farming areas. Source: Wikipedia. CLICK TO ENLARGE.
Joseph Symonds was instantly on alert, though, as he said,  “We should be in a poor state of defense if Indians came upon us.” Jim was in the rear; he heard something and turned around. Two Indians were just a few paces back! “There is two now!” he shouted in a panic. As Symonds turned to look, a rifle shot boomed and struck him in the shoulder. His movement in turning around probably saved him from a more serious wound. He instantly ran for the river and jumped in. Adrenaline blocked out the pain and shock. A jumble of thoughts about his family swam though his head. Fortunately he was a good swimmer, managing to stay afloat despite his injury.
The Indian gave up pursuit of Symonds and started after young Jim who had also jumped in the water. He could not swim and was soon dragged back by the Indian. His captor tried to communicate that he would take Jim prisoner, not kill him. But Jim resisted so strongly that the Indian struck him with a tomahawk and scalped him.
This incident illustrates a curious paradox about life on the early frontier. Why would a Yale educated lawyer from an established family in Connecticut move to the wilderness in Ohio? Author David McCullough in his book The Pioneers described conditions grimly: “There were no roads as yet anywhere in all this wilderness, no bridges, no towns, churches, schools, stores, or wayside taverns.” There as also the threat of disease, food shortages, and Indian hostility. The latter left Meigs at this moment in fear of his life. Fortunately, Meigs and many others endured the hardships to start a new life in the new territory. 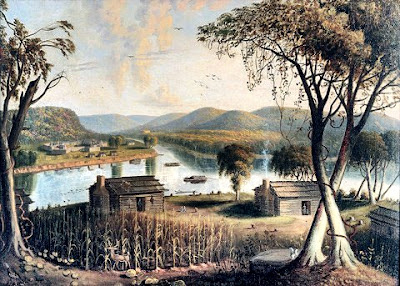 Imagined view of Fort Harmar and the future site of Marietta from the Williams settlement in Virginia (today West Virginia) ca 1787. The farming area where Meigs was working when attacked is near the fort (across the river in left center of the image). Other than Fort Harmar, the area on the Ohio side was undeveloped wilderness. Charles Sullivan, View of Fort Harmar from the Virginia Side, Marietta, Ohio, ca. 1835. Oil on canvas. 20" x 28". (Courtesy, Peter Tillou Works of Art.), viewed at Chipstone.org. CLICK TO ENLARGE
As Meigs turned to face the Indian who had shot Symonds, his eyes widened in disbelief. He recognized the Indian as “Charley,” who acted as a guide in 1790 when Meigs was dispatched with a message to the British at Detroit. Meigs shouted “Is that you, Charley?” No response. Charley, who had shot Symonds, did not fire at Meigs - perhaps because he too had not yet reloaded. Future governor Meigs raised his musket to fire at Charley. The Indian stood his ground, knowing that the gun was not loaded. Meigs suddenly swung at him using his rifle as a club and took off running. Charley deflected the blow with his own rifle, drew his tomahawk, and charged after Meigs. He gained ground on Charley as they approached a fairly wide stream. Meigs managed to leap across. Charley hesitated, probably realizing the chase was now futile, and turned back to join the other Indian. Settlers hearing the gunfire had gathered on the other side of the river and now fired at the two Indians, one of whom fell. But whether he was hit or just slipped on the muddy bank, he got up, waved Jim’s scalp to taunt the settlers, and vanished. 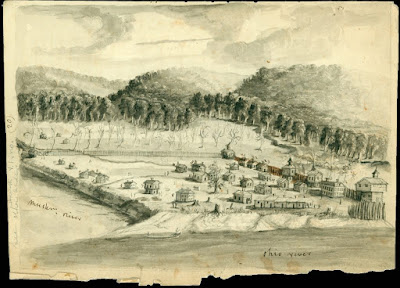 Picketed Point, another fortified residential community at the junction of the Muskingum and Ohio Rivers. From Wikipedia with credit to Marietta College Special Collections. Buildings are numbered; Return Jonathan Meigs’ residence and store is identified in one source as being Number 6, which is the second building to the left of the large building on the point next to the tree stumps. CLICK TO ENLARGE.
Return Jonathan Meigs, Jr. had been sent to Detroit in September of 1790 to deliver a letter to the British. The letter explained that a planned American expedition against the Indians under General Harmar was not directed against British interests. It also asked that they refrain from supporting Indians’ resistance. Meigs was accompanied by John Whipple (son of Naval hero Commodore Abraham Whipple) and an Indian guide…..Charley. He was described in Hildreth’s Pioneer History as “a sprightly Indian who had loitered in Marietta since the treaty (in early 1789). He could speak some English and a little French.”
The trip to Detroit was fraught with danger. Whatever their brave intentions in volunteering for this mission, Meigs and Whipple quickly wondered what they were in for. The entire area beyond the Waterford settlement was total wilderness. Bushwhacking was exhausting and their progress frustratingly slow. Late summer heat alternating with chilly nights wore them down. Indians stole their pack horse; they had to carry their provisions. At last they came to a friendly Delaware village on the Sandusky River.
But hostile Miami Indians arrived at the same time exhorting the Delawares to join them in resisting the American soldiers. It was a perilous situation. The Miamis heard that the two white emissaries were near and threatened to kill them. Meigs and Whipple laid low and considered their options.
Luckily, they were blessed with good fortune which saved them on several occasions. That night, friendly Delaware Indians spirited them from the camp and out of danger. Their guide Charley was forced to leave them at this point, because he too was targeted for death if found with Meigs and Whipple.
The British governor at Detroit received them coldly but finally answered the letter. More good fortune: the governor warned them not to return through Ohio because the Indians “would certainly put him to death, without any regard for the flag of truce which he had (carried to Detroit)” (Hildreth, Pioneer History). And he offered them passage to Presque Isle (on Lake Erie near present day Erie, PA) on a schooner which was about to leave. From Presque Isle, they journeyed down through Pennsylvania to the Allegheny River, to the Ohio River, to home at Marietta. Their effort was courageous but unsuccessful. The British continued to supply Indians with arms and encouraged them to fight against the Americans.
The attack on Meigs had unnerved the families at Campus Martius. Melzer Nye, who was only six at the time, recalled in his Memoirs: “The women were frightened. Some cried, 'Lord have Mercy. What shall we do.' (His) mother said, ‘go home, bolt up your doors and windows and prepare for them.’ And two or three (of them) fainted and Mother threw water in their faces – which scared me for I did not know what it meant.”
Joseph Symonds was carried back to Campus Martius where his wound was dressed and he eventually recovered. Jim’s body was retrieved by E. W. Tupper, “a brave and fearless man, (who) in spite of the remonstrances of the bystanders, sprang into a canoe with one other person and pushed over to the body of the black boy, hoping that he might yet have life in him, but…..he could not be restored.” (Quote from Hildreth’s Pioneer History).
A sidebar story to the Meigs episode played out just minutes before the attack started. Horace Nye, then a young boy, accompanied a Frenchman named Mr. Bureau, to visit a friend near Fort Harmar. They were returning to Campus Martius. Bureau carried a musket, but was inexperienced in using it. He saw a pigeon and took aim. The gun did not fire - a "flash in pan." Young Nye noticed that Bureau had loaded the gun incorrectly - he had inserted the ball first, then the powder. Nye explained that to Bureau, but he persisted in trying to fire the gun. Same result each time. As they approached the entrance to the Campus Martius stockade, the attack on Meigs' party started. Bureau and Nye were lucky the gun misfired. From Pioneer History: “The (misfiring of Mr. Bureau’s gun), which vexed and fretted him so much at the time, no doubt saved both their lives, for the report of the gun would have called the Indians to the spot.”
Return Jonathan Meigs was apparently undaunted by this and similar experiences in early Marietta. He went on to achieve a distinguished career in public service, including serving as the first Chief Justice of the Ohio Supreme Court, Governor of Ohio, and Postmaster General of the United States. He died in 1825.
Sources:
Barker, Joseph, Recollections of the First Settlement of Ohio, Marietta, Ohio, Marietta College, 1958
Hildreth, Samuel P., Pioneer History: Being an Account of the First Examinations of the Ohio Valley and the Early Settlement of the Northwest Territory, Cincinnati, H. W. Derby & Co., 1848
Meigs Family History and Geneaology, “Return Jonathan Meigs 2nd,” viewed at Meigs.org.
Ohio Genealogical Society, Washington County Chapter, “Melzer Nye Memoir.” Viewed at washogs.org
Wikipedia, “Return Jonathan Meigs, Jr.”
Williams, H. Z., History of Washington County Ohio, Cleveland, H. Z. Williams and Bro, 1881
Posted by David Baker at 6:41 AM