We rarely experience serious epidemics today. That’s why the Covid-19 virus pandemic is so unusual - and traumatic. The experience will be etched into our memory and our national psyche for decades to come. The terms social distancing, apex, surge, hot spot, flattening the curve, and shelter-in-place will become part of our lexicon.

But in the first hundred years of Marietta’s founding, epidemics were a somewhat regular occurrence. The threat of disease was always stalking the population. There was incomplete knowledge about diseases and how they were spread. Treatments were generally ineffective. Outbreaks often happened during times of other stresses, compounding their impact. An example was the first smallpox outbreak in early 1790 which was followed by a food shortage and Indian hostility.

The 1790 smallpox epidemic began when an infected man named Welch arrived in Marietta. Concerned residents approved construction of “pest houses,” rough cabins to house the sick persons away from others. It recurred again in 1793 throughout Washington County. On August 9, the Court of Quarter Sessions ordered sick persons to be quarantined at Devol Island in the Muskingum River.

Smallpox treatment at the time offered a crude but fairly effective immunization not yet available for COVID-19. It was called inoculation or “variolization.” Tissue from smallpox sufferers was rubbed into a scratch of the person to be immunized. That person would contract smallpox, usually in a less severe form, and then was immune.

In the 1793 epidemic, the Belpre community voted to be thus inoculated, rather than face almost certain illness and death because of close quarters in the “Farmers Castle” stockade. “Farmers Castle became one great hospital,” one historian observed. Of one hundred people inoculated, all but 5 survived and were thereafter immune. 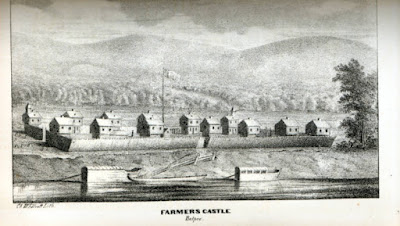 Pioneers also endured periodic outbreaks of scarlet fever, spotted fever, conjunctivitis, measles, and what was then called “bilious fever,” (forms of malaria and yellow fever). Cholera was another deadly disease which periodically swept through America starting in the 1830s.

Dr. Samuel Hildreth, noted physician, scientist, and historian, wrote a research paper, “On the Climate and Early History of Diseases in Ohio” in 1839. It documented epidemics in the early settlements, including Washington County.

The epidemics of 1822-1823 were especially severe. The disease was malaria-like. Such diseases were thought to be caused by natural conditions - such as air polluted by stagnant water or decaying vegetation. Preceding the 1822 epidemic, Hildreth reported abnormally dry weather, stagnated rivers, and pest infestations of grasshoppers, gray squirrels, and potato bugs. Ugh. Sounds biblical. Before the 1823 epidemic, weather was unusually wet with lots of standing water. We know now that most of the malarial-type sicknesses are transmitted by mosquitoes. The conditions observed by Hildreth may have led to mosquito infestations that brought disease.

Many impacts were similar to the COVID-19 pandemic. There were hotspots: Marietta was one. In September 1822, at the peak of illness, 400 cases were reported within a square mile. There were also examples of heroic doctors and nurses like we’ve seen with COVID-19. One of these was Dr. Samuel P. Hildreth who reported on his experience:
“For four months in succession I ate but two meals a day, and spent from sixteen to eighteen hours out of twenty-four in attending on the sick. Through a merciful Providence my own health was good, and the only suffering was from exhaustion and fatigue through the whole of this disastrous season. The proportion of deaths was about six in every hundred cases, where proper medical attention was given to the sick; but so general was the disease that many lives were lost from a lack of nurses.” 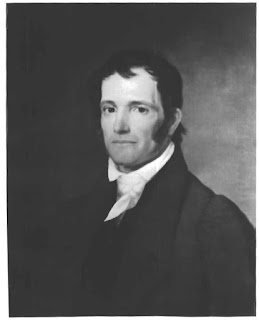 The community acted with caring support and concern. On September 15, 1822, a public meeting was held. Committees were appointed to visit the sick and give them needed supplies. Apparently there was little concern about contagion. On September 18, resolutions were adopted noting “the distressed situation of our fellow citizens and friends calls for the upmost exertions and deepest humiliation,” and that “we will exhort and encourage each other in visiting the sick....” A day of “public fasting, humiliation, and prayer” was observed on September 21. Soon after, most people were recovering, though the epidemic did not end for sure until “hard frosts came in November.” Ninety Five people died from June through November of 1822. The population of Marietta at the time was about 2,000.

Reverend Cornelius Springer’s memory of the 1822 epidemic was vivid, even decades later. He was stationed in Marietta with the Methodist Episcopal Church. He knew of only two people, Judge Wood and a Mr. Putnam of Harmar, who avoided the virus. He remembered that five members of a single family named Adams died. He attended the funeral of attorney and judge Paul Fearing and his wife who died within six hours of each other, early victims of the epidemic. Two sisters named Wells died together and were buried in the same grave.

Rev. Springer and his wife escaped the illness. But the next year in the epidemic of 1923, Mrs. Springer became ill. She ran a temperature for 24 days. He noted with gratitude that Dr. Hildreth cared for “Mrs. S. With great punctuality...and would take nothing for his services. His reply: I am disposed to do something for the Gospel, and I can do it in this way as easy as any other.” And further, Dr. Hildreth sent a load of wood and quarter of beef to the Springers at the parsonage. Rev. Springer also noted that local prejudice against Methodists (his church) dissipated during his two year stay, perhaps an unintended consequence of the epidemic.

Animals also suffered in some epidemics. Even COVID-19  has infected a bengal tiger. Rabies outbreaks in 1810 and 1811 affected wolves, dogs and foxes. Many domestic animals were bitten and died. Hildreth recalled that several people were bitten, though he did not remember anyone dying. He treated one such patient successfully with “free internal use of calomel and cantharides, producing strangury and ptyalism.” Don’t think I want to know what that was.

Chillicothe, Ohio, experienced Malaria-like symptoms in horned cattle and horses during a community-wide epidemic in 1839. There were similar illnesses in Washington County horses in 1815.

Each epidemic is unique; some produce unexpected events. A deadly cholera outbreak in 1833 struck Columbus. There was panic; contracting cholera was often fatal. A fourth of the population fled to nearby communities. 100 people died. An 1849 a cholera recurrence decimated the Ohio Penitentiary population. Prison workshops became hospital wards. Guards deserted. Discipline was relaxed. For sixteen days, prisoners were not locked in cells, and yet order prevailed. Unfortunately, 118 Prisoners died, including 18 in one day.

Adversity was part of life in the early years in the Ohio Country. That included frontier hardships, Indian threats, disease, and leaving family and friends behind in the East. Ephraim Cutler, a prominent leader, recalled his arrival at Marietta in September of 1795:  “We had landed sick, among strangers, and mourning the loss of two children to disease on the trip west to Marietta. Such was our introduction to pioneer life.” He recovered and became a successful farmer and civic leader. Sadly, he lost another child, Manasseh, in the 1822 epidemic.

Hildreth, Samuel P., Pioneer History: Being an Account of the First Examinations of the Ohio Valley and the Early Settlement of the Northwest Territory, Cincinnati, H. W. Derby & Co., 1848.