My wife likes on-line trivia questions. Recently she asked me this question: Rudolph the Red-nosed reindeer was created for which department store? The choices were Macy’s, Bloomingdale’s, Neiman Marcus, or Montgomery Ward.

My first reaction was shock that Rudolph was a marketing creation and, well, not real. He is so ingrained in Christmas lore, it seemed like he’d been around forever. The answer about which department store surprised me, too. Keep reading to see the trivia answer, followed by the Rudolph “creation story” originally posted by National Public Radio (NPR). 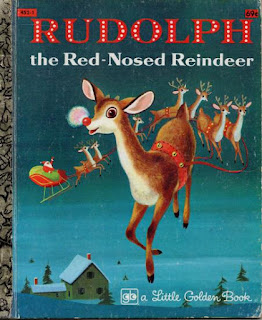 Popular image of Rudolph from a children’s book
https://americanhistory.si.edu/blog/rudolph-red-nosed-reindeer-turns-75
Triviagenius.com answer:
Santa's reindeer are a vital part of his Christmas story, but did you know that Rudolph didn't exist until 1939? The beloved reindeer with the red nose was the creation of Robert L. May. May was a catalog writer for Chicago-based department store Montgomery Ward. Each Christmas, the store would give away free storybooks to the children. May decided to write the tale of a lonely outcast reindeer. Two million copies were printed and the story became a huge hit, inspiring songs, cartoons, and more.
NPR report 12/25/2013 (images inserted by author)
Everybody knows Rudolph was the last reindeer to join Santa's crew, but few people know about the department store copywriter who brought his story to the world.
The year was 1939, the Great Depression was waning and a manager at Montgomery Ward in Chicago decided that the store should create its own children's book for the annual holiday promotion.
The boss tapped Robert L. May, an ad man for the store, to take a crack at a story. May was a hit at holiday parties for his way with limericks and parodies. But May didn't see himself as a winner. He had always felt like a bit of an outcast, and, at 35, he felt he was far from reaching his potential, pounding out catalog copy instead of writing the Great American Novel as he had always dreamed he would.
He came back with the story of an underdog, red-nosed reindeer who was in the right place at the right time — just when Santa needed a reindeer with exceptional skills. "Can't you come up with anything better?" the boss asked, according to a May's 1975 telling in a story published in the Gettysburg Times.
But May believed in the story. He got his buddy in the art department to draw up some sketches and, together, they convinced the boss. 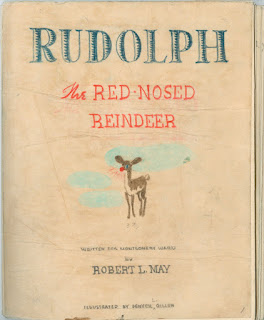 Image of original draft manuscript
https://www.npr.org/2013/12/25/256579598/writing-rudolph-the-original-red-nosed-manuscript
Months into the project, May's wife died from cancer. Robert became a widower and a single father. His boss offered to take the reindeer project off this plate. But May refused. "I needed Rudolph now more than ever," he later wrote. The book was a hit. Montgomery Ward's printed and distributed more than 2 million copies that year at branches across the country. 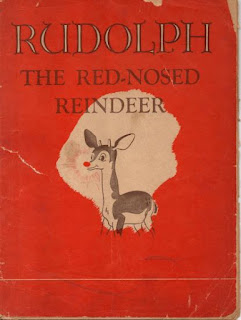 An original copy of the 1939 booklet "Rudolph the Red Nose Reindeer" distributed free to all children who visited Montgomery Ward stores during the Christmas season. This is the front cover. Fun fact: other names were considered (Romeo, Rodney, and Reginald, anyone?) but “Rudolph” won out.
https://americanhistory.si.edu/blog/rudolph-red-nosed-reindeer-turns-75
While Rudolph was hitting it big, things grew worse for May. He was living on a copywriter's salary and spent years buried in debt from his wife's medical bills.
After World War II, Montgomery Ward's then-CEO Sewell Avery, for reasons that aren't exactly clear, gave May the rights to Rudolph. (His daughter tells us that the bosses never thought Rudolph had potential as more than a holiday promotion, but we'd like to think, for the sake of this cute little Christmas tale, that his humanity won him over.)
If ever there was going to be a time for May's luck to change, this would be it. It just so happened that May's brother-in-law (Johnny Marks) was a songwriter. He hadn't made it big yet, but he was getting there. May talked him into writing a song about Rudolph. That song was picked up by none other than the singing cowboy, Gene Autry. It sold more than 25 million copies and paved the way for the classic Rankin/Bass stop-animation film.
Thanks to Rudolph, Robert May's family was taken care of financially through the end of his life and beyond. And he always delighted in being the man who introduced the oddball reindeer and his triumphant tale to the world.
And as for Rudolph, well, he, as they say, went down in history.
View Robert May’s original story (a poem) by clicking on the link below, then scroll down in the article to find the manuscript link. This is the original draft; the final version had a few changes. Also, enjoy the artwork. Read or listen carefully; it is more detailed and longer than the familiar song. The verses were written in the same rhyming cadence as “The Night Before Christmas” poem.
https://www.npr.org/2013/12/25/256579598/writing-rudolph-the-original-red-nosed-manuscript
Merry Christmas!
Sources:
National Public Radio, “Morning Edition” broadcast, 12/25/2013, https://www.npr.org/2013/12/25/256579598/writing-rudolph-the-original-red-nosed-manuscript
“Rudolph the Red-Nosed Reindeer Turns 75,” National Museum of American History, https://americanhistory.si.edu/blog/rudolph-red-nosed-reindeer-turns-75
“Rudolph in Rauner,” Rauner Library Special Collections, Dartmouth College, https://raunerlibrary.blogspot.com/2009/12/rudolph-in-rauner.html
Triviagenius.com
Wikipedia
Posted by David Baker at 5:47 AM