What do Rufus Putnam and Ohio State Football Have in Common?

He observed that the Buckeyes were being “disrespected” by all manner of  coaches, sports pundits, and fandom realms who questioned their selection for the 2020 playoffs. The Bucks had played only 6 games because of COVID issues. Plus, some said their schedule was weak, and they floundered at times against worthy opponents. Several major head coaches had ranked them below the top four. Most egregiously,  Clemson Coach Dabo Swinney ranked them 11th in his voting.
All of this aroused Buckeye Nation to indignation, anger, and frustration. McGee noted that this attitude towards Ohio State football - and the State of Ohio (“the fly-over state”) in general - seems be endemic in the national psyche. It also, he said, brings out passion and pride from Ohioans. He then eloquently noted the state’s pioneer heritage and proud spirit. He had indeed done his research, breaking into what I am calling an Ohio Pride cheer in this excerpt from his article:
.....This is a state that was founded by Rufus Putnam, a Massachusetts man who was so angered by the British march into Lexington and Concord that he joined the Continental Army the very next day and rose to become one of George Washington's right-hand men.
This is the state that got so fed up with the federal government in the early 19th century that it said, "We're out of here," and it moved to secede in 1820, a full four decades ahead of Fort Sumter.
This is the state that has birthed eight presidents, more than any other, including Ulysses S. Grant, who led the Union to victory in the Civil War. Not to mention, Grant's sword that cut through the South, William Tecumseh Sherman. From the Wright Brothers, John Glenn, Neil Armstrong, Jack Nicklaus, Paul Newman and Steven Spielberg to Gloria Steinem, Toni Morrison, Harriet Beecher Stowe and Annie Oakley ... you think this state is going to produce people who are going to sit back and take lip out of Paul Finebaum and that damnable Dabo Swinney?!
"It's pride, pure and simple. There is something about this land that it just becomes a part of who you are, so you are going to love it and you are going to defend it if you feel like it's being disrespected by someone outside of Ohio," explains Columbus attorney Alex Hastie, producer and host of the "Ohio V. The World" history podcast.
Rufus Putnam is referred to in Wikipedia as the "Father of Ohio." He was a prime mover in the initial settlement of Ohio starting at Marietta. He also a delegate from Washington County at the constitutional convention for Ohio statehood.
Putnam was a true Renaissance guy. Here are just a few of his attributes. Full disclosure: your author is an unabashed admirer of Putnam.
There is more, but this gives you an idea about this remarkable man. Learn more about him at Campus Martius Museum, an Ohio History Connection site, in Marietta. You can also read The Pioneers, a book by historian author David McCullough. 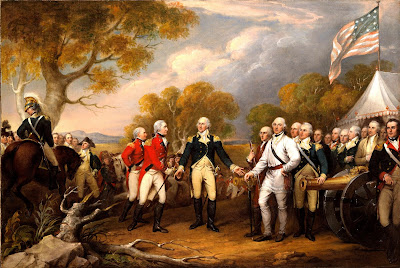 Painting in Capitol Rotunda, viewed at Wikipedia.com
Surrender of General Burgoyne at Saratoga, New York, 17 October 1777 metal print by John Trumbull. Rufus Putnam is seen in profile, the third person to the right of General Gage in the center.
Back to the ESPN article. I really enjoyed it, especially the light-hearted tone and the “right on” comments about Ohio State, Buckeye Nation, and Ohioans pride. Rufus Putnam was a worthy example of that pride. Thanks to Ryan McGee for reminding his readers of Ohio’s rich heritage.
The condescending comments about the Buckeyes football team, especially the Dabo Swinney put down, had a predictable effect. It helped propel the Buckeyes to a 49-28 rout of Clemson.
Read the full article here (it may not be accessible after a certain date):
https://www.espn.com/college-football/story/_/id/30630135/ohio-state-vs-world-how-buckeyes-their-fans-feed-perceived-slights
Go Bucks! OH-IO!
Sidebar notes: 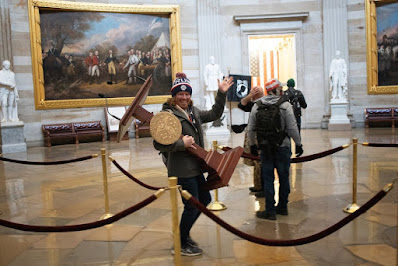