These are profiles of three African American men from our early history. Each distinguished himself with a life of courage and perseverance. Each had the opportunity to live as a free man in the Northwest Territory or Ohio where foresighted leaders had adopted laws to prohibit slavery.

Christopher Malbone aka “Kitt Putnam”
Kitt Putnam panicked as the flatboat started to sink crossing the Ohio River in 1793. He was helping Aaron Waldo Putnam and Major Robert Bradford move cattle from Belpre, Ohio to Virginia. Drowning was a common risk on the early frontier because waterways were often used for transportation. Kitt was an African American servant in the household of Israel Putnam Jr. of Belpre.
He was frightened because he could not swim. The canoe sent to rescue the men could only take one at a time. One version of the incident said that the two white men with him insisted on being rescued first. Israel Putnam Jr., in whose home Kitt served, encouraged him to bounce on his tip toes to stay above water. He also admonished Kitt to not to disgrace the family name by showing any fear. There was no context with the latter comments, but the impression is one showing little empathy or encouragement.
Kitt Putnam's given name was Christopher Malbone. He was one of the first Blacks to live most of his life in Washington County. He was a servant of General Israel Putnam, then his son Colonel Israel Putnam Jr. Kitt came to Washington County from Connecticut with Israel Putnam Jr. in 1789 and lived at The Farmer’s Castle stockade in Belpre as a teen. He was described as friendly, athletic, a hard worker, and kind. He was an excellent worker and sentry, standing watch to warn those working in the fields of danger.
Kitt achieved distinction as the first Black person to vote in Ohio and maybe the Unites States. He voted in the 1802 selection of delegates from Washington County to the Ohio constitutional convention. Ironically, the Constitution, while it prohibited slavery, denied Blacks the right to vote in the State of Ohio. 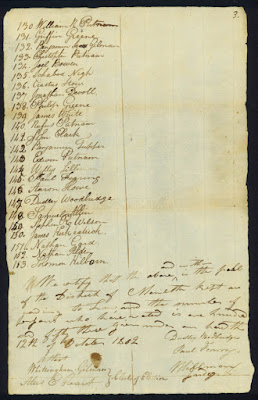 This image shows a list of voters for delegates to the Territorial Convention, District of Marietta, dated second Tuesday of October, 1802. Christopher Malbone, a.k.a. Kitt Putnam, the first person of color, to vote in the new territory, is listed on line 133 (fourth from the top) as Christopher Putnam. Photo courtesy of Marietta College’s Local Government Records and Legal Documents collection.
CLICK TO ENLARGE 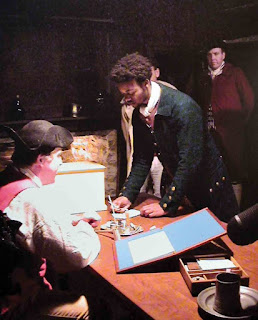 This actor portrayal of Christopher Malbone voting, from the documentary film “Opening the Door West,” can be seen as part of the “Pathways to Freedom” exhibit at the Campus Martius Museum. (Photo by Erin O'Neill). Copied from Marietta Times article February 7, 2018.
CLICK TO ENLARGE
At age 21, Kitt Putnam became a free man* and could seek other employment. He started working for Captain Devol who lived near the Muskingum River helping clear fields and tend the floating mill. He died unexpectedly in 1802; there was great sadness at his passing. The cause of death is unknown. It is also not known if he had a family or where he is buried.
*The nature of his servant status is not clear. He was not a slave but may have been an indentured servant under a contract which expired on becoming an adult at age 21.
Bazaleel** Norman
This man was a veteran of the Revolutionary War. Blacks served in the war, starting in 1777. There were reservations at first about their bravery and whether military training and access to weapons might tempt them to rebel. Blacks were also fighting for their own independence. Some also had to decide which side, America or Britain, would give them the best chance for freedom. Blacks in the Continental Army served with distinction. They also provided needed manpower, especially at crucial times of low enlistments in general. The Black soldiers served for an average of 4.5 years, more than 8 times the average white soldier.
Bazaleel joined the Continental Army in 1777. Most Army units then were integrated. Bazaleel Norman likely fought alongside white soldiers to gain freedom for country - and for African Americans. He served in Captain Richard Anderson’s company in seventh regiment of the Continental Army Maryland line. His service included the battles of Monmouth, Camden, Cowpens, Gilford Court House, and Eutaw Springs. He served the entire war until the Maryland line of the Continental Army was disbanded in 1781.
After the war, in 1782 he married Fortune Stephens in Frederick County, Maryland. They had six children. Sometime before 1819, they moved to Roxbury Township*** in Washington County, Ohio. There he farmed.
Bazaleel was granted a pension in 1818. An affidavit required to continue his pension was filed in 1820 with the Washington County Common Pleas Court. It listed his war service and also included a list of his assets and debts. Many veterans, especially African American, were poor and relied on the pension for survival. Here is a partial list of his assets:

Some of the debts included: “One Hundred & Twenty five dollars to Joel Adams. Thirty Six dollars to Dudley Woodbridge. Fourteen dollars & Seventy dollars to Augustus Stone...” Woodbridge and Stone were merchants in Marietta, quite a distance by horse or on foot from where Bazaleel lived in western Washington County. 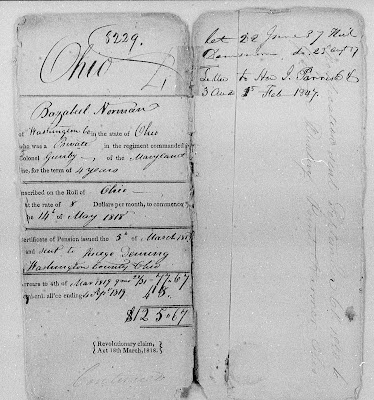 Pension certificate for Bazabeel Norman - image from National Archives viewed at
https://catalog.archives.gov/id/196314602
CLICK TO ENLARGE
Bazaleel’s 1820 affidavit plaintively stated: “I am by occupation a farmer, but owing to age and infirmity I am unable to do very little toward supporting myself.” His signature appeared as “Bazaleel his X mark Norman.” He was signing with an “X” likely indicating that he was illiterate.
Bazaleel Norman died in 1830. His wife Fortune applied for the survivor pension benefit in 1832. It listed Bazaleel’s cause of death as “falling from a rock...his family found him dead at the foot of a precipice” after he had been missing for a day. Another application was made in 1837, and the pension was finally granted - only four years before she died. For some reason, the pension had been delayed or denied for nearly five years. Fortune Norman died on February 3, 1841.
**His name also appears elsewhere as Bezael, Basil, and Bazabeel
***Roxbury Township was an early township that was dissolved in 1851. Parts of it went to Palmer Township, Morgan County, and Noble County.
William Peyton
Washington County resident William Peyton, “Uncle Billy,” was proclaimed the oldest person in the United States in 1912 at age 120. He lived until 1919, dying at age 128, still thought to be the oldest person in the country. He was born as a slave in 1792 in Prince William County. William was bought for $333 as a child by George Creel, an early settler in Wood County, Virginia. He remained with the Creel family for generation after generation. He left them in 1868 and moved to Decatur Township in Washington County where he lived for the rest of his life - another nearly fifty years.
Uncle Billy was one-of-a-kind in many ways. He was described as a “large man with a splendid physique” who loved work. On his eightieth birthday he set a local record by splitting 320 fence rails in a single day. His long life was remarkable because “he used liquor, chewed, and smoked tobacco.” He had an excellent memory and could recall events when Thomas Jefferson was president. His fitness was legendary; he would often walk to Marietta or to Wood County to visit the family of his former masters. Emancipation Day on September 22, 1916 was the fifty- third anniversary of the Emancipation Proclamation freeing slaves. There was a county-wide celebration - said to be the largest in the State of Ohio. The Marietta Register-Leader newspaper reported that William Peyton was the parade honoree. 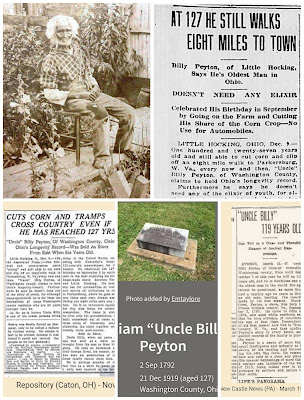 Collage of information about “Uncle Billy” Peyton from Facebook post 2/21/2021 on Harmar Village - Marietta, Ohio page. CLICK TO ENLARGE
“Uncle Billy” died on December 26, 1919. Peyton’s headstone is at the Decatur United Methodist Church, reading: “William Payton, Sept. 2, 1792, Dec. 26, 1919, 127 Y. 3 M. 24 D.”  His wife was forty years his junior and died in 1900. He was survived by one son and a granddaughter. Judge L. N. Tavenner of Parkersburg reviewed his birth records and substantiated his year of birth as 1791, a year earlier than the date on his gravestone. He had lived through the administrations of twenty-eight presidents from George Washington to Woodrow Wilson.
Sources:
Burke, Henry Robert, “Lest We Forget” website, “William ‘Uncle Billy’ Peyton 1792-1919” viewed at lestweforget.Hamptonu.edu
Dennis, James L., “Washington’s Darker Brother, 100 years of Black History in Washington County, Ohio 1788-1888,” published 1967 by the author
Hildreth, Samuel, Biographical and Historical Memoirs of the Early Pioneer Settlers of Ohio, Cincinnati, H. W. Derby & Co., 1852
Historical Marietta blogpost, August 6, 2016, “53 Years of Freedom to be Celebrated” article from the Register-Leader, August 19, 2016
Marietta Times article, “Black History Month: First to Vote,” February 6, 2018, article by Erin O’Neill
National Archives, Revolutionary War Pension and Bounty Land Warrant Application File W. 5429, for Bazabeel Norman, Maryland, viewed at catalog.archives.gov
Posted by David Baker at 5:54 AM