July 4, 1788 in Marietta, Ohio, dawned warm, humid, and windy. Rain threatened. Joseph Buell was a soldier in the garrison at Fort Harmar. His journal entry for July 4, 1788 was matter-of-fact: "This day was celebrated with thirteen rounds from the six pounder, and repeated again at four o'clock. The troops received an extra allowance...." The "allowance" was probably extra liquor rations. On a previous July Fourth in 1786 Buell reported that soldiers were granted an extra gill of liquor and "had liberty to drink & get drunk." 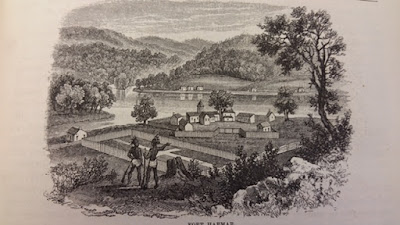 Fort Harmar circa 1789
https://upload.wikimedia.org/wikipedia/commons/b/bc/Fort_Harmar.jpg
Illustration from The Pictorial Field-Book of the War of 1812, Benson J. Losing.
CLICK TO ENLARGE 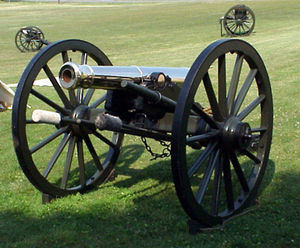 The celebration across the Muskingum River at Marietta featured cannon salutes, a feast, an oration, spirits, toasts, - and rain. There were numerous Revolutionary War veterans in the new community. Only twelve years had elapsed since the Declaration of Independence was signed on July 4, 1776. The noble cause, sacrifice, and victory were undoubtedly fresh in their minds.

Colonel John May reports in his journal: "...labour ceases today, in memory of the Declaration of Independence...at one o'clock, General Harmar and Lady, Mr. and Mrs. McCurders, and all the officers not on duty came over (from Fort Harmar)...at half-past one an excellent oration was deliverd by Judge Varnum and the cannon fired a salute of fourteen guns."

The weather was fickle. Colonel May: "At 3 o'clock just as dinner was on the table, came on a heavy shower...However the chief of our provisions were rescued from the deluge but injured materially. When the rain ceased, the table was laid again; but before we had finished, it came on to rain a second time. But on the whole, though, we had a handsome dinner..."

Henry Howe's Historical Collections of Ohio offers a description of the food served:
A repast, consisting of all the delicacies which The woods and the streams and the gardens and the housewives skill afforded, was served at the bowery (a covered area along the east side of the Muskingum River). There was venison barbecued, buffalo steaks, bear meat, wild fowl, fish and a little pork as the choicest luxury of all. One fish, a great pike weighing one hundred pounds - the largest ever taken by white men, it is said, in the waters of the Muskingum (River) was speared by Judge Gilbert Devoll and his son Gilbert.

Those assembled offered toasts. Major Ebenezer Denny noted in his journal: "When dinner was over thirteen toasts were drunk, each accompanied with a round from the three pounder (cannon), attended in the intervals by two drums, two fifes, and a couple of excellent violins." No one, it seems, was left out of the toasts. They drank to:
The official activities ended with a "grand illumination" of Fort Harmar - presumably a fireworks display. Fireworks were commonly available in colonial America. The partying lasted past midnight.

Judge James Mitchell Varnum's oration delivered an uplifting message of inspiration, praise, and gratitude at the favorable prospects for the nation, the new territory, and Marietta. The opening two paragraphs set the tone:

This anniversary, my friends, is sacred to the independence of the United States. Every heart must exult, every citizen must feel himself exalted upon the happy occasion.

The memorable Fourth of July will ever be celebrated with gratitude to the Supreme Being, for that revolution which caused tyranny and oppression to feed upon their own disappointment, and which crowned the exertions of patriotism with noblest rewards of virtue. 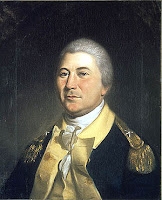 Varnum's lofty sentiments really did reflect the fellowship present in the community. Words of a participant recalling the experience later in life captured the camaraderie of the event: "Never had such a dinner since. We were one great family, loving God and each other, proud of our new home and resolved on success. And we won it."


Sources
(all of these documents, unless otherwise noted, were viewed on-line at various web sites)

Heintze, James R., "The First Fireworks on the Fourth of July," Fourth of July Celebrations Database, viewed at http://gurukul.american.edu/heintze/fourth.htm

Hildreth, Samuel, Pioneer History: Being an Account of the First Examinations of the Ohio Valley and the Early Settlement of the Northwest Territory, Cincinnati, H. W. Derby & Co., 1848, Pages 162, 214-215, 505