Williamstown and the Tomahawk Claim

When the first Marietta settlers landed on a dreary 7th of April in 1788, Isaac and Rebecca Williams were already settled across the Ohio River in what was then Virginia. Their settlement, which would become Williamstown, is a story of two fascinating people whose families who explored this area separately as early as 1770.

The initial settlement land was set aside by a tomahawk claim. At the time, a person could claim 400 acres of land on the frontier by girdling a few trees to create a clearing and placing their initials on a prominent tree. That’s what Samuel Tomlinson did in 1773. He also claimed an additional 1,000 acres adjacent to the tomahawk claim through what was called a preemption claim. We’ll see how this claim became a town as we learn more about Isaac and Rebecca.

Isaac Williams was born in West Chester, PA on July 16, 1737. His family moved to Winchester VA, then a frontier town, while he was a boy. He acquired hunting and frontier skills as he grew up. At age 18 he was employed by the colonial government as a ranger to monitor the movements of Indians. He served briefly in the army of General Braddock and in the party that delivered the first provisions to Fort Duquesne after its capture by the British. Isaac was a very proficient hunter and trapper and made several expeditions to the Ohio River region. Wild game on the frontier of those days was extremely plentiful – a hunter’s dream.

On returning from one of these trips, he and two companions were trapped by a huge snow storm and extreme cold. They were confined to camp and soon depleted their food rations. The snow made hunting impossible and difficult to find enough fuel for fires to keep warm. One of their party died from illness compounded by the cold and starvation. Isaac’s other companion lost toes and parts of his feet from frostbite. He was unable to walk for about a month. Isaac courageously stayed with him until he was able to walk well enough to get home. Their only “food” was a broth of boiled skins from the pelts they had mixed with melted snow. It took Isaac months to regain his strength from this ordeal. But it did not diminish his zeal for the life of a hunter.

Isaac settled along Buffalo Creek in 1769 near present day West Liberty WV in Brooke County. Further hunting expeditions took him clear to the mouth of the Ohio River and along the Mississippi River north to the Missouri River. He brought back a wealth of beaver pelts on these ventures.

While hunting and trapping, he made numerous tomahawk land claims along the Ohio and tributaries. This was opportunistic – almost none of this vast area was settled, so he could be the first to claim the best land parcels as he came upon them. He was then able to sell them to later settlers who wanted prime lands but were too late to make claims of their own.

In 1774 Isaac returned to military service and was with Lord Dunmore as he sailed down the Ohio River on his expedition against the Shawnees. Williams was present when Chief Cornstalk signed the peace treaty at Chillicothe.

It was during this period that he met Rebecca Tomlinson Martin, a young widow at Grave Creek. Her husband was a trader who had been killed by Indians on the Hocking River in 1770. She was born at Will's Creek on the Potomac in Maryland on February 14, 1754. She moved with her two brothers to a cabin on Grave Creek (near Moundsville WV) in 1771 and was their housekeeper. She lived for weeks at a time alone while the brothers were out on hunting tours.

Historian Samuel Hildreth described her as "full of life and activity and as fearless of danger as the man who chose her to be his companion." Her fearlessness was particularly evident on one trip as she struck out alone from their home at Grave Creek (near Moundsville WV) to visit her sister who lived some 50 miles north near Yellow Creek. She planned the return trip by canoe on the Ohio River. Her trip began in the afternoon. At dark she stopped and waited until the moon came up to continue the trip at night. As the moon rose, she retrieved the canoe and pushed it out into deeper water. Her bare foot recoiled as she stepped on the dead, cold body of an Indian, lying in the shallow water. He had been killed a short time before she came on shore. She coolly stepped into the canoe and began paddling, thinking to herself how lucky she was that he was dead. She arrived home without further incident.

Rebecca also was skilled at treating wounds with home remedies. Hildreth recounts one episode where she assisted in caring for a Thomas Mills who had been wounded by rifle fire in fourteen places. One arm and one leg were broken. Using her remedies, including slippery elm bark, they nursed Mills back to health. That he lived - and did not require amputations - was considered miraculous at the time.

Rebecca’s brothers made the tomahawk claim of 400 acres of land opposite the Muskingum River for her. They cleared a small plot of land, planted corn, and built a cabin in 1773. Joseph Tomlinson a few years later worked to legally validate this initial tomahawk claim. There was an extensive process of application to the Virginia Commonwealth, payment of a fee, completion of surveys, along with patience and sometimes luck. In 1781 the 400 acres were finally deeded to Isaac Williams on Rebecca’s behalf. Continued Indian raids near their home at Grave Creek prompted them to consider moving to the Williamstown property. Isaac made two additional trips to clear the land again and prepare it for settlement.

Joseph Buell, a soldier at Fort Harmar, recorded an entry in his journal dated March 24, 1787: “Isaac Williams arrived with his family to settle on the opposite (Virginia/West Virginia) side of the river. Several others have joined him which makes our situation in the wilderness more agreeable.” There were about 10 families which comprised the initial settlement at what was then called Williams Station or Williamsport. 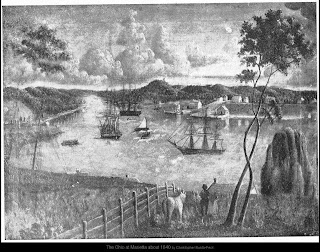 Isaac and Rebecca settled into their new home on the Ohio. Shortly after that, Rebecca gave birth to their only child, Drusilla. Isaac gave up hunting full time but still made occasional hunting trips - especially for beaver trapping, a favorite activity of his. He became involved in managing his plantation and civic affairs.

During this time, his remarkable combination of personality traits, skills, and interests became evident. He was a proficient and courageous hunter, yet mild mannered and not given to the crude behavior of typical frontiersmen. He was charitable, enjoyed social interaction, possessed a strong business sense, and became active in civic affairs. Isaac was involved in the formation of a new county in Virginia - Wood County, necessitated by the growing population in the area. Later he became the long time operator of the ferry service which operated between Marietta and Williamstown.

Rebecca was occupied with raising Drusilla and an orphan niece. She continued using her self-taught nursing skills, as described in the Williamstown history book Fruitful Valley, “Mrs. Williams made salves and lotions for weary bruised pioneers…and nursed the sick and put in place the broken bones of unfortunate woodsmen.” She was also enjoyed reading.

Isaac and Rebecca were charitable. He provided food to the settlers in Belpre and Marietta when they experienced a critical food shortage in 1789. They also opened their home to river travelers who became ill. They eventually emancipated their slaves; Isaac left tokens of his appreciation to them in his will.

Isaac and Rebecca’s latter years also brought challenges. There were numerous law suits regarding the land claims. Those were costly to defend and a stressful distraction to them. Drusilla married John Henderson in 1805. But she bore two or three children but each died in infancy. She herself died prematurely a few years later in 1810, leaving a lasting void in the Williams' lives.

Isaac died in 1820. Rebecca passed away a few years later in 1825. They left behind an admirable legacy and thriving community - that began with a humble tomahawk claim.