Walking through the woods on July day recently sparked a reminder of Marietta’s earliest days as a new settlement in 1788. Our two English Sheepdogs Sophie, Tess, and I ambled down a trail near our home. It was a sunny and mild Sunday in July - a welcome break from the typical heat and humidity.

Sunlight filtered through the trees. We stepped into a cathedral of total shade at the waterfall under a canopy of towering maple, oak, and sycamore trees. It was quiet. Only the gentle patter of the waterfall and the wheezy buzz of a seasonal cicada were audible. Later that same day, the dogs explored the edge of a bluff above the creek. Suddenly there was an explosion of flapping wings and squawking as a flock of turkeys launched themselves down the valley.

The towering trees, turkeys, and the quiet reminded me of Marietta’s earliest period 230 years ago in July of 1788. The tall trees hid the sun needed to grow crops needed for food. Turkeys were a welcome source of food, but large flocks also damaged crops. It was quiet then: there were just a few dozen people around. Only sounds of nature, people talking, and hand tools would have been heard.

Yet it was a busy July of 1788 in the new settlement at Marietta. A year had passed since the passage of the landmark Ordinance of 1787 which created the first United States territory beyond the original thirteen states. Now it was time to bring that new territory to life.

Summary of Ordinance of 1787 from Reddit.com viewed at
https://www.reddit.com/r/Infographics/comments/3pgdiy/the_northwest_ordinance_of_1787
CLICK ON IMAGE TO ENLARGE

July 4 featured a community celebration with fireworks. On July 9, the Territorial Governor, Arthur St. Clair, arrived at Marietta. Major Ebenezer Denny’s journal records the event: “The arrival of the Governor of the Territory was announced by the discharge of thirteen rounds from a six pounder (cannon). The garrison (at Fort Harmar) turned out, and troops received him with presented arms.”

The government of the new territory was officially installed on July 15. Governor St. Clair was conveyed from Fort Harmar to the “Bowery” (a long covered area erected near the Muskingum River) on the east side on a barge with “Congress” written on one of the oars. He was greeted by General Rufus Putnam and two of the three territorial judges, Samuel H. Parsons and James Mitchell Varnum. Putnam gave brief welcoming remarks. Secretary Winthrop Sargent read the commissions of the governor, judges, and secretary. St. Clair gave an address. 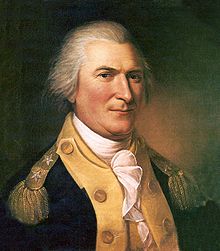 Major General Arthur St. Clair, first Governor of "The Territory North and West of the Ohio River"
From Wikipedia

St Clair made several points that caught my attention: 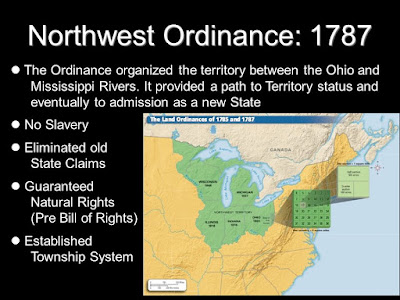 Summary and Map of the Northwest Territory - from
https://historyplex.com/northwest-ordinance-of1787-purpose-summary-significance
The map shows states which eventually were formed from the territory lands
CLICK  ON IMAGE TO ENLARGE

General Putnam gave a brief response and "three cheers closed the ceremonies of the day." The citizens of Marietta issued a written response to St. Clair's speech. A committee including Ebenezer Sproat, John May, and Paul Fearing delivered that response to Governor St. Clair on July 17.

Governor St. Clair had been engaged in governing since his appointment in late 1787. His primary focus was arranging for a treaty negotiation with Indian tribes in the Ohio country. Congress had tasked him with this daunting assignment shortly after his appointment. On the very same day of his inauguration, he had corresponded with Secretary of War Henry Knox, regarding an Indian skirmish at the Falls of the Muskingum River where treaty negotiations were to be held. Click on link to learn more about the Treaty of Fort Harmar.

The Governor and Judges issued their first Territorial law on July 25, 1788,  "A Law for regulating and establishing a militia of the United States northwest of the river Ohio.... "  A few weeks later, Washington County, Ohio was created. In September, the “Court of Quarter Sessions” - what we refer to as common pleas court today - was convened with much fanfare. There was a procession from the Point to a room in the northwest blockhouse at the Campus Martius fortified enclosure led by Sheriff Colonel Ebenezer Sproat riding on horseback with saber drawn. Appointed judges Rufus Putnam and Benjamin Tupper were seated on the bench. Reverend Manasseh Cutler, visiting the settlement, offered a prayer. Colonel Sproat intoned these words: "Oh yes! A court is open for the administration of evenhanded justice , to the poor and the rich, to the guilty and innocent, without respect of persons; none to be punished without trial by their peers, and then in pursuance of the laws and evidence in the case."

The bold experiment in territorial government that would be the base for state formation and nation building in the United States was well underway in late 1788 - in Marietta, Ohio. 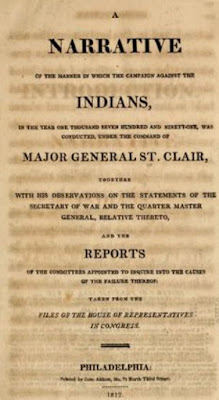 Sources: All of these were viewed on line unless noted.

Posted by David Baker at 4:17 PM No comments: