Cumberland (“Cap”) and Anna Posey were a remarkable African American couple with Southeast Ohio connections. They achieved a level of success in life that was unusual for Blacks in the late 1800's and early 1900's. I found their story captivating. What was it that motivated them - from humble beginnings -  to learn, to strive, to persevere through the challenges? That is the subject of this blog post. I learned about Posey from an exhibit at the Ohio River Museum in Marietta, Ohio. There you can discover his story, along with many other aspects of steamboating and life on the river. 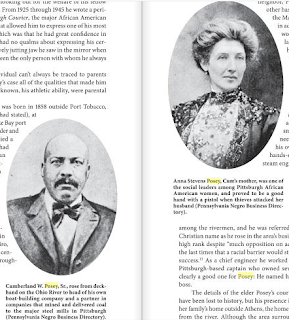 Cumberland Willis ("Cap") and Anna Posey
Image from Cum Posey of the Homestead Grays
Cumberland Willis Posey (“CW”) was born in 1858, the son of Alexander Posey and Elizabeth Willis Posey. They were likely freed slaves, who lived near Port Tobacco, Maryland. They worked for a white family in Charles County, Maryland. Elizabeth died when Cumberland was just seven years old. Alexander became an ordained minister in the African Methodist Episcopal (AME) church. He and his children moved to Winchester, Virginia in 1867, and to Belpre, Ohio, in 1869.
There CW found a job in Belpre working for a Mr. Payton sweeping the decks on the ferry boat MAGNOLIA. Posey was mesmerized by the mechanical operation of the steamboat. Something stirred inside him. Though just a teenager, he set his sights on becoming a licensed engineer on a riverboat.
Angeline (“Anna”) Stevens was born born and raised in rural Athens County, Ohio, in a large African American family. Her father Acquilla was a railroad worker and stonecutter. Her mother Eliza Brackston Stevens took care of eleven children at home. Fortunately for the Stevens family, Black children were allowed to attend public schools with other white students.
There is no record of Anna’s childhood years. The family lived in rural Athens Township. Theirs was the only non-white family on their page of the census records in 1870 and 1880. Her father worked to support the family. Census records say he was still working at age 78 as a cemetery caretaker.
Anna was said to be the first African American graduate of Athens High School.* Graduation was quite an accomplishment, considering her family’s poverty, discrimination against Blacks, and the limited resources of rural schools. The Athens Messenger article “High School Commencement” on June 6, 1879 mentioned the speech given by Anna. It was titled “The Visible and Invisible.” The theme was that invisible influences often have more impact on one’s life than the visible ones. The newspaper was complimentary of the speech:
The originality of thought exhibited in (Anna’s) composition gives basis for large expectation of the literary efforts of her maturer years. (She) is the first colored graduate of Athens High School and deserves great credit for her achievement and for having set an example to her race of what may be attained by intelligent and persistent effort....
Mr. Payton encouraged Cumberland Posey in his quest to learn about steamboat operation. He helped CW land a job as fireman on the riverboat STRIKER**. Sources mention his work on other boats, such as the DICK HENDERSON and SALLIE J COOPER in the Belpre-Parkersburg area. Local river people recalled years later in a newspaper account that he was a fireman on the SALLIE J COOPER. 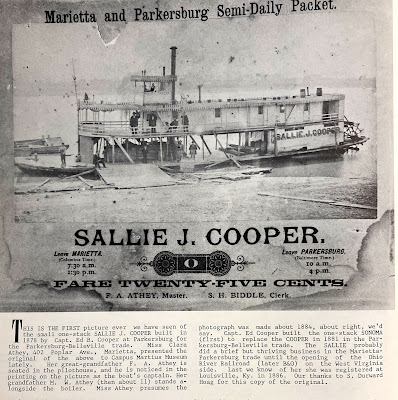 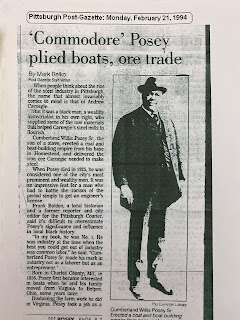 Cumberland Posey Sr. image in a Black History Series article in the Pittsburgh Post-Gazette
CW earned a Second Engineer license in 1877, despite facing “much opposition on account of his color,” as reported in The Pittsburgh Courier at CW’s death. He later achieved his dream to become a chief engineer in 1892. After being licensed, he was often known as “Cap” (for Captain) or “Commodore” Posey. He was the first African American to do so, according to the Western Pennsylvania Historical Society. The Langston (OK) City Herald June 15, 1893 edition reported:

C. W. Posey of Munhall, Pa., is the first Negro granted a Chief Engineer's license to run a steamboat on the Mississippi River and tributaries. He is now general manager of the Delta and Cyclone Towboat company. He is also a stockholder in that company.

While in Belpre, in addition to working on boats, he belonged to the “colored” Odd Fellows lodge. This was noteworthy - odd, you could say, -  because CW was probably still a teenager at the time. Odd Fellows*** was (and is) a fraternal organization promoting personal development, ethical conduct, and charitable activities.
Anna Stevens earned a teaching certificate to teach in Athens County in the spring of 1879. She passed an examination and her certificate was renewed for 18 months in August of 1880. Anna attracted attention as a qualified teacher:
Progress in the march of events is, in one direction, chronicled in the fact that Miss Anna Stevens, of African lineage, is teaching the public white school west of Mr. Joseph Herrold’s suburban residence. Miss Stevens has previously taught in York township and at other points where she has uniformly been highly personally esteemed. As a teacher she possesses rare tact and efficiency and her services in this line have been in wide demand.
Athens Messenger (OH) Thursday, September 7, 1882. page 5, column 3
At some point Anna Stevens and Cumberland Posey met and fell in love. There is no record of the courtship details. They were married in Athens, Ohio, according to this court document:
Marriage license and return
Colored
PARTIES
Posey, C. W. and Stevens, Angeline
License issued the 9 day of May A. D. 1883 to the above-named parties:
Wm. S. Wilson, Probate Judge
Shortly after their marriage, she stopped teaching, and they moved to Homestead PA, near Pittsburgh. There were more river-related jobs and valuable contacts in that area. 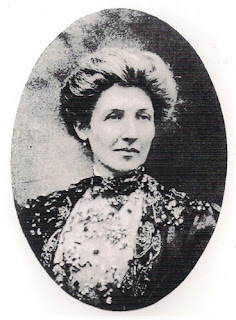 Angeline (Anna) Posey. Image from the 1910 Pennsylvania Negro Business Directory
Cap Posey went on to achieve great success in business, wealth, and civic involvement. In the 1890’s, he began building steamboats, not just working on them. He reportedly built or owned forty-one boats during his lifetime.
His involvement with steamboats also included these with local connections:
CW was owner, investor, or manager of numerous companies. One of them, Diamond Coal and Coke Company employed as many as 1,000 people. He profited from hauling iron ore across the Great Lakes to Pittsburgh for for Andrew Carnegie. Cap earned respect for his business success and the quality of the boats he built. Newspaper reports often used his name without mentioning he was African American. S&D Reflector magazine observed: “Captain Posey was held in very high regard for his boat design not just in Pittsburgh but up and down the river.” 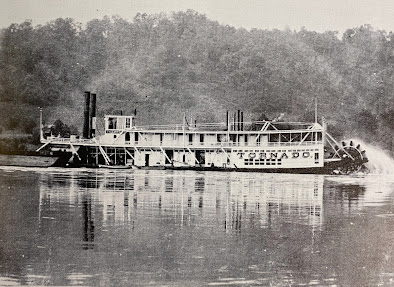 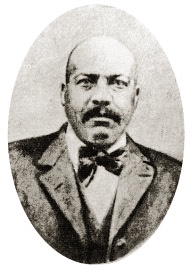 Cumberland Willis (“Cap”) Posey
Image from Pennsylvania Negro Business Directory 1910
Anna was a housewife, mother to their three children, and a trusted advisor to her husband. Her role in their businesses was significant and probably understated. She held title to some of the real estate investments. Her name was on a government contract for dredging operations. She also was active in social and arts organizations. Anna was gifted at painting. Her pictures decorated the walls of their tastefully decorated home.
She was a founding member in 1894 of the Aurora Reading Club, a cultural organization of Black women in Pittsburgh. It still exists today. Anna was cultured - but gutsy, too. She wrote a spirited letter in 1901 to the editor of the white-owned Pittsburgh Daily Post advocating for the recognition of Black woman’s civic organizations on an equal basis with white organizations. Anna defended her family - literally. In 1894 she fired warning shots with a pistol to chase off two men who tried to rob her husband. A few years later, she personally apprehended a group of boys who had burgarized the Posey home and some stores. The boys were from prominent families; they agreed to make up the losses.
How did Cumberland and Anna Posey achieve such success at a time when most African Americans worked hard to make ends meet in menial jobs?
For CW, there were several factors: 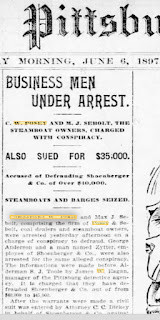 Headlines such as these (above and below) were surprising to your author, considering Cumberland Posey’s general reputation. They are one indication that river-related business at the time could be rough. Images from newspapers.com
Anna’s success attributes:
It's an inspiring story: two African American people achieve great success from humble beginnings in rural Ohio. A quote from the Parkersburg Sentinel in 1894 about Cap Posey applies to Anna, too: "Cumberland Posey has prospered in a way that is rare for one of his race. But it was a reward for qualities that bring (success) to any one, black or white."
Notes
*The Athens Messenger newspaper listed the student as “Anna Butler.” Was it Anna Stevens listed with the wrong last name or another student? That can’t be verified. However, the correct first name, the lack of other African American residents with the name Butler, and the likelihood that Anna Stevens received a high school education, make it likely that the “Butler” surname was listed incorrectly. Other sources list Anna Stevens as the graduate; that is your author’s assumption.
**There is no record of a steamboat with this name in boat directories. It could have had another name, or been a small private boat. Or, Cumberland Posey may have worked as a “striker,” a steamboat engine room job, and that term was incorrectly identified as a boat name.
***The “Odd Fellows” name is apparently derived from the unusual or odd notion that common working men in 18th century England would form such a high-minded club.
Sources
Belko, Mark, “‘Commodore Posey’ plied boats, ore trade,” Black History Month Series, Pittsburgh Post Gazette,February 21,1994.
Burke, Henry Robert, “Cumberland Willis Posey Sr.,” copy provided by Belpre, OH Historical Society
Ewell, Thomas, The Smoky City, The Colored American Magazine, December, 1901
Hancock, Carol Wylie, a dissertation titled “Honorable Soldiers, Too: An Historical Case Study of Post-Reconstruction African American Female Teachers of the Upper Ohio River Valley,” Carol Wylie Hancock, 2008, copy provided by James E. Overmyer, author of Cum Posey.
Newspapers.com, numerous articles on line found in searches for Cumberland W. Posey, Sr.
Ohio River Museum, Marietta OH, “Cumberland Willis Posey, Sr.” exhibit.
Overmyer, James E, Cum Posey of the Homestead Grays, Jefferson NC, McFarland & Company, Inc., 2020, viewed on line at Google Books
S&D Reflector Magazine, a publication of Sons and Daughters of Pioneer Rivermen, various reports and photos on steam towboats connected to Cumberland Posey Sr.
Southeast Ohio History Center, Athens, Ohio, documents and articles published by The Athens Messenger newspaper related to Angeline Stevens, provided by Levering Library volunteers John D. Cunningham and Cindy M. Smith
Way, Frederick, with Rutter, Joseph, Way’s Steam Towboat Directory, Athens OH, Ohio University Press, 2013, information on boats connected to Cumberland Posey Sr.
Whitaker, Mark, Smoketown, the Untold Story of the Other Great Black Renaissance, New York, Simon and Shuster, 2018
Williams, Rachel Jones, “Cumberland Willis Posey Sr.,” Pennsylvania Heritage Magazine, Vol 36, No. 2,
Wills, Rick, “Cap Posey overcame slavery to rise to success in Pittsburgh,” Triblive.com, July 20, 2008.
Posted by David Baker at 8:35 AM