The steamboat BUCKEYE BELLE was torn apart in a spectacular boiler explosion on November 12, 1852 at Beverly, Ohio. Wreckage and human remains rained down on the surrounding area. It was a gruesome sight. Witnesses struggled to find words to describe the devastation. Twenty four died, a dozen were injured.

The BUCKEYE BELLE was a graceful sidewheeler steamboat, one of the largest to ply the Muskingum River. The BELLE was launched from Knox Boatyard in Marietta in May, 1852. She carried passengers, mail, and freight between Marietta and Zanesville, also to ports as distant as Pittsburgh and Keokuk, Iowa. The Pittsburgh Commercial Journal on May 19, 1852 referred to the Buckeye Belle as that “new and splendid sidewheeler.”

The Marietta Intelligencer  newspaper on November 16, 1852 described the accident scene:
“It is impossible to give to our readers any correct idea of the awful character of the steamboat disaster....We do not suppose that in the whole history of steamboat explosions, record can be found of such utter destruction, to the boat and fixtures, as in the case of the Buckeye Belle. The loss of life too is great, perhaps larger in proportion to the number of persons on the boat than was ever before known.” 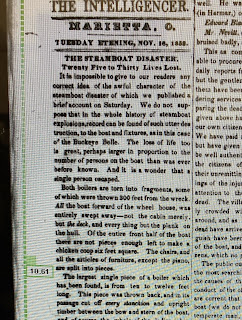 I was fascinated by several aspects of this tragedy: the sheer destructive force of the explosion, the human toll, and how it was covered by the media.

The Devastation
The devastating impact of the explosion is hard to imagine. The boat was mostly destroyed. A report issued after the accident noted: “All her upper works above the main deck, forward of her wheel house, were literally torn to splinters. The balance of her upper deck was either carried back into her engine room or thrown overboard. All of her beams were broken from stem to stern.”

Accounts from the Marietta Intelligencer provide chilling details:
"A piece of the boiler about five or six feet long was blown to the foot of the High Rock, on the hill. A man was thrown there also."
"A red hot brick was thrown up the hill more than 300 feet and fired the leaves in the woods. A rabbit was killed by the fall of a brick, nearly 400 feet from the boat."
“Of the entire front half of the boat, there are not pieces enough to build a chicken coop six feet square.” 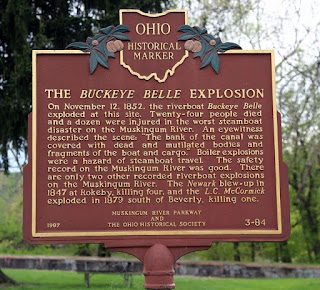 Historical marker near the site of the explosion.

The Human Toll
Total deaths are reported as 24, 26, and 30 from different sources; there does not appear to be a final definitive number. A coroner's jury report about the accident states that 24 died - 21 in the accident and 3 in the succeeding days. 12 were injured, many with disabling injuries.

Recovery of bodies and human remains must have been traumatic for the citizens who responded to the scene. Yes, ordinary citizens; there were no trained first responders like today. Bodies were strewn about, many mutilated and dismembered. Body parts were found at random. From the Marietta Intelligencer: "...fragments of human bodies - here a piece of an arm, there a leg, and close at hand a liver, were found....and on pieces of the boilers were marks of flesh and blood. Yesterday (a) tongue....was found on the bank, and in another place the head of a man, with the hat on it - and no other remains being near!"

Among the deaths were 13 persons listed as unidentified. They were interred side by side in the Beverly Cemetery, along with a box containing human body parts. A plaque at the cemetery marks the burial site: “Here lie buried thirteen unknown persons killed by the bursting of the boilers of the Steamer Buckeye Belle on November 12, 1852 near the guard gates of the Beverly Canal.....This monument (see below) is erected to the memory of these unknown dead and also to Capt Harry Stull, the owner of the Steamer, by his grandson, Edward Matthew Ayers." Amazingly, there were survivors. Sixteen year old Pius Padgitt was one. He had boarded with other passengers and walked into large main hall when the explosion occurred. "I heard no sound, felt no shock, experienced no pain. When consciousness returned, I found myself away forward on the bow of the boat....." He thought he had died. He finally realized he had been blown about 75 feet and was badly scalded. He remembers hearing "...the most piercing, heart rending cries and groans that ever fell upon mortal ear. Even after the lapse of years I can hear the agonizing screams and expiring groans of those suffering, dying men."

There were several women on board. The cabin where they were located collapsed into the lower deck but luckily the deck above them did not fall on them. Charlotte Stone from McConnelsville kept them calm and restrained them from jumping into the icy water. A wood stove fell over and started a fire; she calmly smothered the flames with a blanket. The women were rescued from the rear of the boat. None were hurt.

News Coverage
News coverage of the disaster was print media only. There was no radio, TV, internet that we take for granted today. The Marietta Intelligencer relied on eyewitness accounts. Beverly businessman Enoch McIntosh wrote eyewitness reports to newspapers, as did a Dr. W. C. Glines. Getting accurate information was a challenge. On November 13, the Intelligencer  stated "we made arrangements for daily reports from the scene of disaster, but the gentlemen from whom we expected them has been constantly employed in rendering services to the suffering, and preparing the dead for interment." But they were able to obtain some information from local citizens who had visited the accident scene. "We have paid no attention from mere rumors, but have given such facts as seemed to us to be well authenticated."

Yet media reporting of that period tended toward opinion and commentary as well as purely factual reporting. The Intelligencer was (properly, in your author's opinion) effusive in crediting citizens of Beverly with heroic efforts to help the injured and removing those who died. Relatives and friends of Buckeye Belle passengers soon swarmed into Beverly. There were "scenes of anguish around the wreck of the boat and, and in the dwellings of the citizens, which no pen can describe."

Finding accurate information about the cause of the accident was difficult, especially early on before there had been any definitive investigation. The Intelligencer waffled. On November 13, it plainly stated that the  cause of the accident was the "recklessness" of the engineer. Yet a sentence later their account said "We hear a great many reports, as to the cause of the accident, some of which seem to be well authenticated, and others do not seem very reliable." It did not explain further. The Intelligencer  then opined indignantly: "If half that is said of the conduct of the officers.....is true, such of them that survive the accident should be convicted of murder."

Coroner's Jury Report
A Coroner's Jury* was appointed in Beverly to determine the cause of the accident. A report was issued a few weeks later. The body of that report expressed uncertainty of the cause from examining the remnants of the boat. Some observations favored low water in the boiler; others a build-up of excessive steam pressure. "It seems to us, that take whatever view (low boiler water or excessive steam pressure) of this case we may, there are difficulties that cannot be solved even by the scientific." Yet the report concludes with a plain statement: "From the evidence before us, there can be no doubt but the explosion was brought about by the conduct of the second engineer....,by holding down the main valve." That action would have prevented the release of excess steam, allowing the explosive build up of steam pressure.

"During our examination, we are happy to say, that the officers of the boat have been completely exonerated from any blame..."  This implied that the second engineer, Joseph Daniels of Harmar, acted entirely on his own. The reason for his actions were never stated. Daniels was scalded but survived and was apparently not prosecuted or punished for his misdeed.

More of the story


*   A Coroner's Jury was usually convened to determine cause of death. In this case, it functioned more as an accident investigation body. Jury members were apparently local residents.