Marietta and the Queen

What do the names Castrapolis, Protepolis, Urania, Tempe, Genesis, and Adelphia have in common? They were discussed as possible names for the new settlement at Marietta. Adelphia was the strongest contender; it was advocated by pioneer leader/lobbyist Manasseh Cutler. In a December 3, 1787 letter to Rufus Putnam, he stated, ”I feel a partiality for the name proposed at Boston, and think it preferable to any that has yet been mentioned. I think that Adelphia will, upon the whole, be the most eligible. It strictly means brethren, and I wish it may ever be characteristic of the Ohio Company.”

The city was ultimately named Marietta, in honor of Marie Antoinette, then the flamboyant Queen of France. The French had played an important role in support of the colonies during the Revolutionary War. Many of the pioneers had a personal acquaintance with the French nobleman Marquis de Lafayette who had served with distinction as a soldier, commander, and diplomat for the American side. The Queen herself was said to be an ardent supporter of the colonies.

This story was brought to mind by a newspaper report on October 16 this year. My wife noticed it and said to me, “Did you know that Marie Antoinette was beheaded on this date in 1793?” I looked up blankly from my iPad. Synapses slowly began to fire; dots were connecting.....Marie Antoinette....Queen of France during the French Revolution....yes! - Marietta’s namesake. Now I had to know more.

The Ohio Company Directors passed a resolution on July 2, 1788 as follows:  “Resolved, that the City near the confluence of the Muskingum and Ohio (Rivers), be called MARIETTA (and) That the Directors write to his Excellency the Compte Moustiers, informing him of their motives in naming the city and requesting his opinion, whether it will be adviseable to present to her majesty of France, a public square-“ Moustiers was the French ambassador to the United States at the time.

There was no record of a response from the Queen or French officials to the naming of the city and the offer of land. A report circulated that the Queen had sent a commemorative bell to Marietta which was lost at sea. But that has never been verified.

Ohio Company Directors designated Square Number 1 (where Mound Cemetery is now) as Marie Antoinette Square. It was leased to Rufus Putnam on March 7, 1791 for a period of ten years for maintenance and beautification.  By that time, the Queen’s name was no longer attached to the square.

Mound Cemetery, Illustration from Squier and Davis Ancient Monuments of the Mississippi, viewed at touringohio.com. This was named Marie Antoinette Square for a period of time before it became a cemetery.

Queen Marie Antoinette lived a life of extremes: from the pinnacle of royal power and wealth to imprisonment, disgrace, and public execution. She was born an Austrian princess and given in marriage at age 14 to Louis Auguste de Bourbon, heir apparent to the French throne. For her May 1770 wedding, she was escorted to France with an entourage that included 57 carriages, 117 footmen and 376 horses. 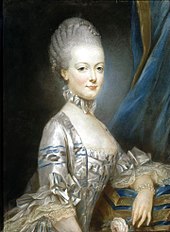 Marie Antoinette at age 13 by Joseph Ducreux. Viewed at Wikipedia. This portrait was sent to her future husband in France so he could see what she looked like.

In 1774, the couple became king and queen - he at age 19, she at 18. Early in her reign, she was famous for profligate spending, flamboyant dress, and wild socializing. Tabloid-type gossip exaggerated her public image. She was vilified for shameless opulence while many in France - and the national treasury - were impoverished. Later in her reign, she focused more on her children, political issues, and cultural interests. She is credited with influencing policy leading to French support of the American cause in the Revolutionary War. 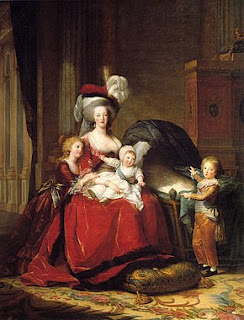 This 1787 State Portrait of Marie Antoinette and her three surviving children, Marie Thérèse, Louis Charles (on her lap), and Louis Joseph holding up the drape of an empty bassinet signifying the recent death of Marie's fourth child, Sophie, was meant to improve her reputation by depicting her as a mother in simple, yet stately attire (by Vigée-Lebrun, 1787). From wikipedia.com

But the royal couple were resistant to the teeming social and political changes in France. The French Revolution forced her and King Louis VI from power. She was convicted of treason on trumped up charges and publicly beheaded, as her husband had been earlier that year, on October 16, 1793. Her body was placed in an unmarked grave. 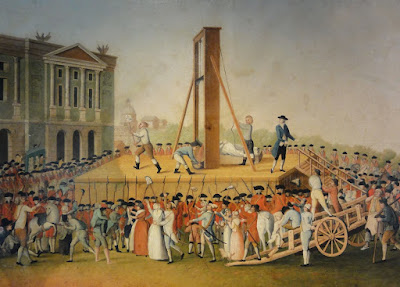 Read  "10 Things You May Not Know About Marie Antoinette" at History.com at this link:
https://www.history.com/news/10-things-you-may-not-know-about-marie-antoinette.
Number 10 on that list says: “A U.S. city is named in honor of Marie Antoinette.” That city is Marietta, Ohio.