It was a blustery, cold morning on October 4 as the W P Snyder, Jr. Sternwheel rested at her moorings waiting for transport to Louisville. There she will be part of the Festival of Riverboats. See festivalofriverboats.com for more information. Thousands of attendees will have a chance to see and tour the W. P. Snyder Jr., the last surviving sternwheel workboat. 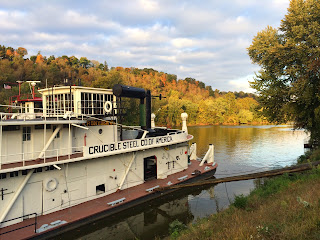 From 1918 to 1954, she functioned as a towboat, mainly moving barges of coal for Crucible Steel (and other previous owners) in the Pittsburgh area. In 1955 the Snyder was donated to the Ohio Historical Society to be moored at the Ohio River Museum. On September 16, 1955 the W. P. Snyder, Jr arrived at Marietta under her own power, smoke billowing from the stacks and the steam whistle echoing through the valley. 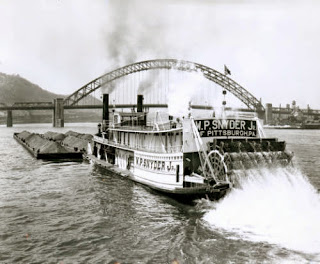 W. P. Snyder, Jr. with coal barges in the Pittsburgh area in the late 1940s

On this morning in 2014, the Snyder is being readied for the move. The crew of the towing company secure bulkhead doors, retract the smokestacks and flagpole, and loosen the spar poles anchoring the boat to the shore. A few dozen onlookers watch, chat quietly, and take lots of photos and videos.

Soon the towboat Dale Taylor edges up to the Snyder's towing knees - the support structures on the bow where barges were pushed by the Snyder in her operational days. She is secured to the Dale Taylor towboat and soon they are under way. 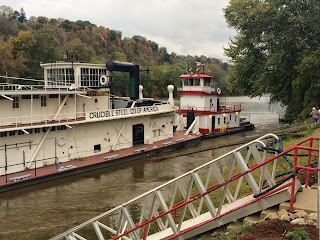 Moving the Snyder requires careful orchestration of details, including monitoring the weather, river conditions, and the turning of the Historic Harmar Bridge. Huh? Turning a bridge? Yes, and here is the background.

The Historic Harmar Bridge (HHB) is a railroad bridge originally built in 1873, replacing a covered bridge on the same piers. Below is a drawing showing the spans and a photo of the bridge. The span on the right with the circular base in the middle of the span is the swing span. It can be moved 90 degrees to allow boats to pass through. The span is turned by a hand operated crank. The HHB is the last railroad bridge in the country with an operating swing span.

The HHB had to be rebuilt more than once due to flood damage. The most recent was the 1913 flood which destroyed spans 1,2,and 3. The swing span survived. The bridge was rebuilt and was used for trains until 1962 when the railroad line was abandoned. In 1987, the bridge was modified with a pedestrian walkway. Pedestrians use the bridge and enjoy a more direct route between Harmar Village and Marietta downtown, not to mention the scenic views of the rivers. 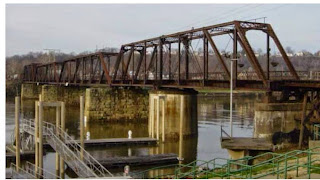 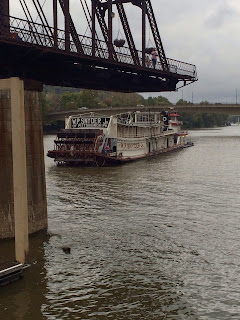 Swing span is opened for the W. P. Snyder and towboat Dale Taylor to pass underneath

Moving the Snyder requires opening the swing span on the HHB. It takes 10-12 strong people to open and close the span. As the Snyder approaches the Putnam Bridge, the last of the volunteers scurries onto the bridge swing span to help with the turn. They begin pushing the turn lever and span responds. Soon it is fully open. A stiff, gusty wind and rain squall suddenly blows up, complicating the maneuvering process.

The Dale Taylor pilot skillfully navigates the W. P. Snyder, Jr. through the narrow opening, blows the whistle, and powers up. The locals assembled clap and cheer, seeing that the Snyder is safely through and on its way.

The start of this voyage highlighted two valuable historic assets in Marietta - the
W P Snyder, Jr. sternwheel towboat and the Historic Harmar Bridge. Today they worked together.