My future wife Suzanne and I launched a canoe near the Red Cross office on Wooster Street. The river level was that high in March of 1964; water covered the downtown. The canoe was an old birchbark canoe - could have belonged to Rufus Putnam - probably not fit for flood water exploration. But we were young and decided to suspend the use of common sense for this outing.

It was exciting on the open water drifting past flooded buildings, traffic lights, and vehicles. It was also eerily quiet. The first stop was the Monument to the Start Westward in Muskingum Park. I was a photo bug and editor of the Marietta High School yearbook that year. The quest was to capture the monument, which included a boat, as if it were afloat. Clever, huh? Click, click. Done. 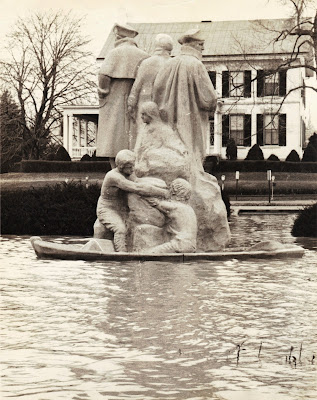 Next we cruised down front street and took more pictures. Water lapped at the Post Office steps. The river had crested and was starting to fall. We discovered the hydrological effect of this when we passed Butler Street. A strong current of receding water pushed us alarmingly to the right toward the buildings. Quick! - Row hard, real hard! Whew, past the intersection, the current subsided.

We reached Greene Street and hit more strong current. In a panic, we realized (duh: blinding flash of the obvious) that we were near open water with no immediate shelter from the current. The canoe lurched to the right as we tried to turn the corner to head east on Greene. Adrenaline surged - how can we escape this angry river. A long unscheduled trip downriver seemed quite likely. But at the right time we neared a parking meter. I grabbed that meter head and managed to swing the canoe around enough so that we could get away from the current. We dodged behind some buildings and breathed a sigh of relief. The rest of the trip was boring by comparison.

The flood was the highest in some time. It flooded my parents jewelry store on Putnam Street, Baker & Baker Jewelers. I saw first hand the elaborate system which many downtown businesses had for coping with periodic "high water," the term locals use for floods. In the store, all of the display cases could be wheeled out. Wall shelving was unbolted from the walls and removed. Walls and floor were smooth concrete - easier to clean up when the water receded. No basement to contend with - it was filled in. The store was a three story building. Upper floors were used to store the inventory, displays and shelving. An electric lift moved the larger stuff up to the third floor. Dad hired a couple of strong (that left me out) high school kids for the heavy lifting. There were also family and friends who helped.

These photos show the street, the electric lift, and interior on the 3rd floor 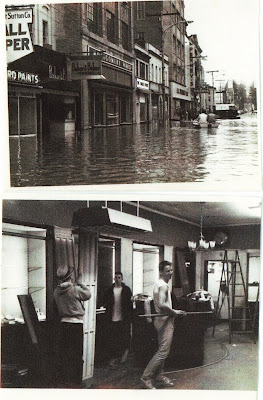 Volunteers include my brother Joe's buddies Bill LaBarre, Jim Lallathin, and an unidentified person pretending to be busy. 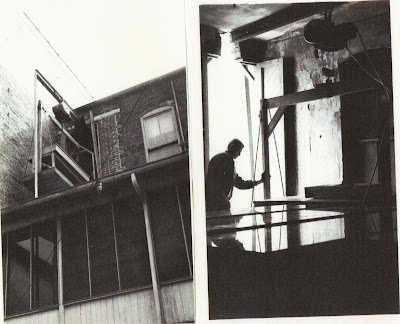 Left photo is exterior view, on right is view from inside of third floor. Worker is Dave(?) Wilcoxen, then from Belpre.

Many local businesses had similar systems to allow for quick removal of inventory and fixtures. Prior to flood control reservoir systems, implemented mid-20th century, serious flooding was a frequent occurance. Floods created havoc even in Marietta's early days. Thomas Walcutt records a flood episode in his journal in February, 1790: On February 17, he observed that "the rivers continue to rise exceedingly fast." The next day water rose so quickly that "before we could get our breakfast done,the water rose so fast that the floor was afloat and we stood in water up to our buckles..."

Life is definitely disrupted with flooding, but people recover and move on - stiff upper lip and all that. Such is is life along the rivers.