Lewis and Clark on the Ohio River

The initial phase of the Lewis and Clark Expedition began in Pittsburgh and included a stop in Marietta. Leader Meriwether Lewis set off down the Ohio River in a flatboat on August 31, 1803, laden with supplies and several recruits for the expedition. He would meet up with second-in- command William Clark at Louisville. Quotes, spelling, and grammar are from Lewis’s journal.

Thomas Jefferson had a vision: that the United States of America could occupy the whole of the continent from Atlantic to Pacific. He had closely studied past explorations of routes to the Pacific Ocean. None had succeeded. Some never had a chance. John Ledyard attempted to reach the west coast in 1786 by trekking east through Europe, Russia, Siberia, then sailing across the Bering Sea. He made it to Siberia but was arrested there. In 1790 Secretary of War Henry Knox promoted an exploration of the Missouri River by Lieutenant John Armstrong that was woefully short of resources, lacking such basic necessities as a tent. A Frenchman named Andre’ Michaux mounted an expedition west that was terminated in Kentucky when Jefferson discovered that Michaux was a French spy.

As President, Jefferson decided a government organized mission was the way to go. Congress approved funding for $2,500 to equip and staff the expedition. It would be a U. S. Army operation, officially named The Corps of Discovery.  Jefferson selected Army Captain Meriwether Lewis, a 29 year old then serving as President Jefferson's personal secretary, to lead the expedition.

August 31: The start down the Ohio had a rough start. After just three miles, they stopped at Bruno's Island to demonstrate Lewis’s innovative compressed air gun for inquisitive local residents. They were amazed by its power. One of the locals accidentally discharged the gun, hitting a nearby woman who "fell instantly and the blood gusing from her temple...we supposed she was dead." She soon revived and the wound was superficial, to their great relief.

At McKees Rocks, "we were obleged to get out all hands and lift the boat over about thirty yards. There were several such portages required - a herculean effort for a fifty-five foot long craft carrying a ton of supplies. They "halted for the night much fatiegued after laboring with my men all day...gave my men some whiskey and retired to rest at eight o’clock.”

The Ohio River then had no dams. There were shallows and deep pools, riffles and calm. Low water was a common condition during dry spells. Fog is also typical along the river in late summer.

Meriwether Lewis was born in Albemarle County Virginia. He was a skilled outdoorsman, developed a life-long interest in natural history, and had interacted with local Indians. He then joined the Army rising to the rank of Captain. His otherwise successful military service was marred by a 1795 court martial for a drunken outburst against a Lieutenant. He was acquitted, though chastened by the experience. He was transferred to a unit commanded by William Clark, whom he later selected for the western expedition.

September 1: Back on the Ohio River, there were more delays from low water and morning fog. He was fascinated by the persistent fog, observing that "the Fog appears to owe it's orrigin to the difference of temperature between the air and water.” He was curious enough to start recording the air and water temperatures each day. There were more portages; one required a team of oxen to drag the boat free.

The river trip was supposed to start in early summer, before the low water and foggy conditions usually occur. But Lewis was held up by the extensive preparations for the expedition. He also spent weeks learning from experts on medicine, natural history, celestial navigation, and other skills needed for the exploration. He was a quick learner. Still, everything took longer than expected. Jefferson fretted at the delays. 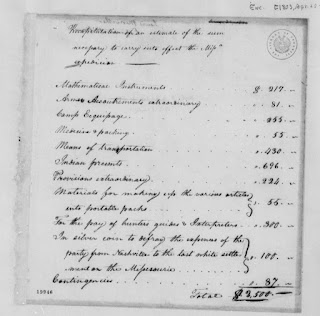 Expedition cost estimates prepared by Lewis, from The Library of Congress, viewed at https://www.loc.gov/resource/mtj1.028_0183_0184/?sp=1&q=meriwether+lewis
The list was short but the details were long


Excerpts from the journal as they moved down river towards Marietta:

Sept 2: Extensive observations by Lewis about the river bank configuration. He noted "...today the leaves of the buckeye, gum, and sausafras (trees) begin to fade, or turn red."

Sept 3: Fog delay, fired one of the crew, hired horses to drag boat over low spot, made only 6 miles. 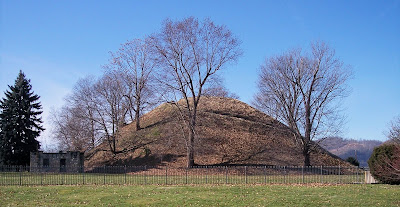 Sept 11: At Long Reach, just below Sunfish Creek, they saw many squirrels swimming from the west to east across the Ohio River. Joseph Barker in his Recollections of the First Settlement of Ohio about Marietta had similar observations. Lewis's dog “Seaman” swam after the squirrels and brought back several which were cooked: "I thought them when fryed a pleasant food..."

Sept 13: Reached Marietta; stayed the night. Observed many passenger pigeons passing over. Flocks were so large that they obscured the sun. More swimming squirrels. While at Marietta, he dismissed two of his hands and took on another. He wrote to President Jefferson and visited with Marietta resident Colonel Griffin Greene whom he described as “the Postmaster of this place, he appears to be much of a gentleman and an excelant republican.” 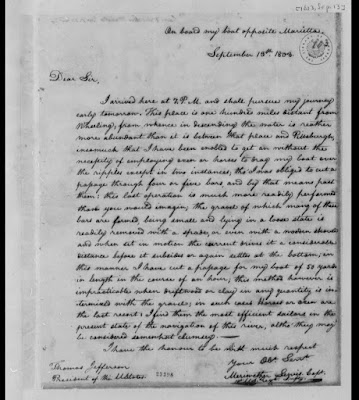 Sept 14: Delayed departure from Marietta until 11 am because two of the crew were drunk and did not return to the boat. They were finally located and brought on board, “so drunk they were unable to help themselves.” More swimming squirrels and mention of malaria which was prevalent in the lower Ohio Valley.

The “hair of the dog” that nipped Lewis was a challenge for the expedition. Planning how much liquor to bring was itself was a major project. The daily ration required for military personnel was a gill (about 4 ounces) of rum, brandy, or whiskey. Spirits were thought necessary for soldiers - “keeping spirits (and bravery) up by pouring spirits down” was the maxim in those days. Lewis brought an estimated 120 gallons of spirits on the expedition. It ran out well before they reached the Pacific.

Drunkenness - like the Marietta episode - was a persistent problem. Many crew members were disciplined. Two were court marshaled for stealing liquor from storage. A separate protocol to prevent theft became necessary for distributing the rations.

The Corps of Discovery expedition overcame that and many other obstacles to achieve legendary success. Learn more about the Lewis and Clark expedition by clicking here.

There was a gap in Meriwether Lewis’s journal September 18 to November 11. He was either too busy or the journals were lost. We are fortunate that his journals included the days before and after Marietta.

Coues, Elliott, History of the Expedition under the Command of Lewis and Clark, Volume I, "Memoir of Meriwether Lewis," New York, Francis P. Harper, 1893