I scanned through the entries of James Backus' journal in Marietta during December of 1788. It was mostly routine stuff - Ohio Company agents met, he bought a barrel of pork, warm days were followed by cold as December wore on. Both rivers froze "thick." Sunday, December 21 had an unexpected comment: "A few people assembled at Battle's Proclamation of Thanksgiving." Backus’ terse, perhaps unpunctuated, phrase baffled me.

"Battles" probably referred to Ebenezer Battelle* who arrived in Marietta in the summer of 1788. I discovered that Territorial Governor Arthur St. Clair issued a Proclamation of Thanksgiving on December 17 for observance on December 25, 1788. This is likely what Backus was referring to.

One of our nobler human traits has been the periodic public expressions of gratitude. Thanksgiving Day is an example of that. In biblical times, God directed Moses to institute the Festival of Harvest in the Bible - Exodus 23:16, "Celebrate the Festival of Harvest with the firstfruits of the crops you sow in your field." There have been many other festivals of thanksgiving, most notably in England and Europe dating from the 1500's.

In the United States, the Thanksgiving holiday tradition is said to have originated with the 1621 celebration at Plymouth in present-day Massachusetts. But there was a well documented 1619 Thanksgiving event in Virginia. The 1619 arrival of 38 English settlers at Berkeley Hundred in Charles City County, Virginia, concluded with a thanksgiving celebration as dictated by the group's charter from the London Company.


That charter specifically required "that the day of our ships arrival at the place assigned...in the land of Virginia shall be yearly and perpetually kept holy as a day of Thanksgiving to Almighty God." There was an annual celebration there until 1622 when an Indian attack resulted in the settlement being abandoned. Scholars have validated the Berkeley Hundred, Virginia version, yet popular belief still clings to the Plymouth Colony Thanksgiving. A Virginia Thanksgiving advocate dismisses the New England thanksgivings as merely "spontaneous and one-time events." 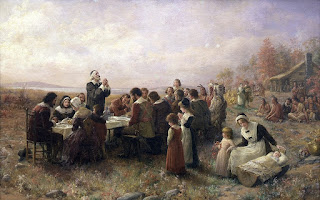 National Thanksgiving Day proclamations were issued intermittently in those early years; the first being in 1777 after the Continental Army victory at Sarasota. There was no national proclamation in 1788. St. Clair apparently decided that a day of thanksgiving was appropriate for the new territory and settlement at Marietta. Hope for a successful conclusion of ongoing treaty negotiations with Indians at Fort Harmar may have been a secondary reason.

Here is the wording of the proclamation:

"For as much as it is incumbent on all men to acknowledge with gratitude their infinite obligation to Almighty God for benefits received, and to implore his superintending care and Providence for future blessings, I have thought proper to set apart a day for that purpose, and do hereby ordain that Thursday, the 25th day of December, be observed as a day of solemn thanksgiving and praise that the people may, with one voice and sincere hearts, express their grateful sensations and consecrate themselves to the will and pleasures of their Divine Benefactor, and that together with their acknowledgements, they may unite in humble supplications to Almighty God, that he would be graciously pleased to prosper this infant settlement and the whole Territory in their husbandry, trade, and manufacturers, and by his own nurturing hand mature and bring to perfection all seminaries of learning, and the promotion and enlargement of piety and true religious amongst all the nations of the earth. And I do prohibit all servile labor on that day.
Given at Marietta this 17th day of December, A.D., 1788, and in the thirteenth year of Independence of the United States.
Arthur St. Clair,
Governor and Commander in Chief.

The proclamation incorporates some of the phrases and thoughts as the 1777 national version, which can be viewed here.

The local festivities on December 25 included a cannon salute, a sermon by General Parsons on Psalm 103:2, "Praise the Lord, my soul, and forget not all His benefits," and sumptuous feasts. The day celebrated both Christmas and Thanksgiving. More details about the activities can be viewed here. Participants were genuine in their gratitude for progress and relative good fortune so far in their new settlement. Their grateful sentiments are reminders to us of the true purpose of Thanksgiving Day.


*Thanks to readers Jean Yost and Bill Reynolds for identifying Ebenezer Battelle as the probable reference.

Hinckley, A. Barton, "Who Really Held the First Thanksgiving in the United States?", reason.com, November 22, 2017.