Marietta College and the Floating Dormitory

Colleges are struggling to maintain enrollments these days, primarily because of fewer college age students in the population. Marietta College ("MC"), for example, has seen its enrollment decline in recent years. That forces a grim balancing act - cutting back and conserving resources while maintaining a quality experience for students.

Imagine the exact opposite occurring - a quintupling of enrollment and a frantic search for more resources - in just a year's time. It actually happened at Marietta College and colleges across the nation. The year was 1946 when millions of veterans returned from World War II. Many had postponed college and wanted to return. And the GI Bill provided incentives with education and training benefits.

MC enrollment had dropped to 200 students during the war as most men were on active duty. By late 1946, enrollment surged to 1,000. That was good news....but where would they be housed? Who would teach them - and in what classrooms? Dormitory space at the time housed only 95 students. MC began an aggressive campaign to find housing and administrative space.

Fortunately there were multiple sources of help available: temporary buildings provided by the government, purchase by MC of some nearby homes for housing, and opening of private homes for students. Then there was The Pioneer, a floating dormitory purchased from the Coast Guard. More about that novel set-up later.

The Federal Government made available a variety of temporary buildings at no cost for housing and educating veterans. Marietta College was the first institution in the country to apply for such facilities through the Federal Public Housing Authority (FPHA).

The community also assisted. Area churches, civic groups, and the American Legion worked to locate homes that would take in students. There was also a Citizens Committee headed by Eloise Grafton and Silas M. Thurlow. A Marietta College report stated that a "large number of men were placed in private homes in the city."

As part of the student housing solution, 23 men were able to live it up on a houseboat. Well, it wasn't an actual houseboat. MC purchased a 111 ft. long U. S. Coast Guard barracks boat and converted it to a dormitory. It was christened The Pioneer, in deference to MC's being the first to use this innovative type of housing - and recalling Marietta's pioneering settlers. The Pioneer was moored in the Muskingum River at the base of the "Start Westward" monument. 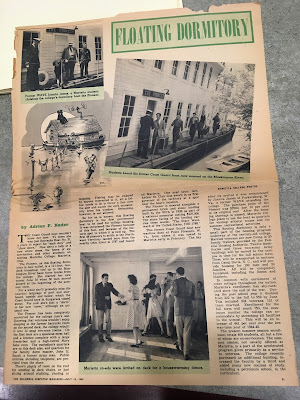 The "shipmates" were from 11 different states. 20 of the 23 were veterans. The second deck had been a barracks room which would hold 50 men. MC knew that veterans would prefer to avoid a barracks-style setting, so The Pioneer second deck was remodeled into 14 two-man rooms. Dorms at that time were unisex - men or women only. The Pioneer was a men's dorm, though a photo shows women being invited on board for a dance.

The first deck included a kitchen, dining hall which doubled as a lounge, showers, and quarters for the dorm master, John E. Sandt, who happened to have been in the Army.

Life on The Pioneer was a little different from conventional dorm living. The guys living there at the time said they notice "a bit of rocking" when a boat passed in the river. They could fish if they wanted to, but college life and studies left little time for that. MC policy prohibited swimming. In warmer weather, some lounged in the sun on the roof, studying or just hanging out.

Some of The Pioneer's resident men were interviewed at the time by the Marietta Daily Times. James L. Stolberg of Williamsport, PA was glad to return to MC. He attended earlier as a member of the 25th College Training Detachment, U.S. Air Crew, which was stationed on campus. Ex-Marine James M. Bossert of Oakmont PA had not heard of Marietta College as he hitchhiked through Ohio. A Marietta man gave him a ride. Bossert mentioned how hard it was to get into the larger universities. His "driver" said, "Try Marietta (College)." Bossert diverted from his trip and headed directly to MC.

The Pioneer chapter at Marietta College ended when the vessel was sold after the housing crisis ended. It remains an amusing footnote in Marietta College history. The pioneering spirit of resourcefulness which it evidenced lives on. 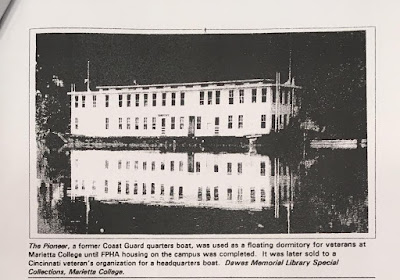 Image of The Pioneer from The Tallow Light publication of the Washington County Historical Society, Vol. 27, No. 1, Summer 1996; original photo courtesy of Marietta College Special Collections.
CLICK TO ENLARGE

There is an interesting sidebar to The Pioneer story: The Pioneer is said to have inspired the concept for a 1960's NBC TV series It's a Man's World. That series portrayed the life of four teenage guys attending a midwest college and living on a houseboat named The Elephant. The setting for the show was a fictional town on the Ohio River, loosely based on Marietta, Ohio. Some background scenes for the series were filmed in Marietta.

The series was itself a pioneer: It introduced more real-life characters and situations involving teenagers coming of age in the emerging unrest of the early 1960's. Other programs of that period featured idealized family shows like "Ozzie and Harriett." Kerry Pechter, wrote about the show in a 2001 New York Times retrospective column about the show. "The show's co-creators Peter Tewksbury and James Leighton, set out to capture the rootlessness, idealism, and iconoclasm....of the early 1960s. And their themes - premarital sex, tragic loss, and the gulf between adults and adolescents - were at times treated in a startlingly candid way."

Critics were excited about the innovative dramatic formula of the new series. With great anticipation It's a Man's World premiered in September, 1962. Unfortunately, the show failed to catch on with viewers. Ratings dropped and reviews were mixed. Sponsors - critical to the financial success or failure of television programs - were restless about the edginess of some episode situations. NBC decided in late November to cancel the show.

Tewksbury, cast members, and fans of It's a Man's World mounted a furious publicity campaign to save the show. The controversy gained national media attention. Cast members Ted Bessell (later starred in sitcom That Girl) and Randy Boone began a cross-country drive in a battered jeep used on the show to generate publicity. They contacted local media outlets along the way and organized protest events. They stopped in Marietta on December 18 and appeared in a demonstration at he Parkersburg WV NBC affiliate WTAP TV with students from Marietta College. A photo of that event included signs saying "Viewers of the World Unite" and "No Cancellation without Representation." The network received thousands of letters protesting the cancellation.

But, all the effort did not change NBC's mind. The show's broadcast on January 28, 1963, was it's last. The pioneering series faded into obscurity, though 50 plus years later, some video clips and details still survive.