Eastern Ohio is abuzz, literally, with the haunting sounds of the periodic cicadas. Billions of them emerge on schedule after 17 years of slow underground incubation. Their buzzing, whirring din echoes through the area.

They have fascinated Americans since first observed in 1633 in Plymouth Colony. Governor William Bradford reported that "they made such a constant yelling noise as made all the woods ring of them.” The pilgrim colonists incorrectly called the cicadas "locusts," referring to their similarity to biblical plagues.

The periodic cicada has the scientific name of magicicada septendecim. The name captures its "magical" reappearance. The second word in Latin denotes the 17 year cycle. There are multiple populations of these critters in the eastern U.S. This group is referred to as Brood V which emerges in eastern Ohio, parts of West Virginia, and patches of Virginia and Maryland.

Pehr Kalm, a Swedish naturalist, observed a cicada emergence in 1749 while visiting Pennsylvania. He opined about the 17 year cycle after hearing and reading of cicada appearances in 1715 and 1732. Thomas Jefferson also wrote about the cicada in his "Garden Book. He noted the apparent cycle after hearing from an acquaintance about "Great Cicada" years in 1724 and 1741.

I was surprised to learn of a Marietta connection to the periodic cicadas: Physician and scientific observer Samuel P. Hildreth was one the first to verify their 17 year cycle with a scientific observation.

About Hildreth: He was an intrepid observer of all aspects of life in Marietta - local history, agriculture, wildlife, geology, and weather. Hildreth was born in Massachusetts in 1783, was educated at Philips Academy, and became a doctor after studying under his father and Dr. Thomas Kittredge. 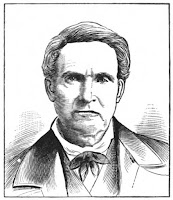 Image of Samuel Hildreth from Wikipedia

He journeyed by horseback to Marietta in 1806 (at age 23) to satisfy a lifelong curiosity about the Ohio Country, then the unsettled area west of the Ohio River. He permanently moved to Marietta in 1808. Samuel Hildreth was a true renaissance man. He served as the town doctor while continuing his local history research, scientific studies, and prodigious writings.

Back to the cicadas and the 17 year cycle. Hildreth observed cicada appearances in 1812, 1829, and 1846. He studied them with far greater concentration than your attention span-challenged author could ever muster. Here is just a small portion of his observations in May-June 1812:

"From the 24th of May to the 3rd of June, their numbers increased daily, at an astonishing rate. The cicada,...when it first rises from the earth, is about an inch and a half in length, and one third of an inch in thickness....has the appearance of a large worm or grub...When they first rise from the earth, which is invariably in the night, they are white and soft. They then attach themselves to some bush, tree, or post and wait until the action of the air has fried the shell with which they are enveloped: the shell then bursts on the back for about one third of its length, and through this opening the cicada creeps, as from a prison." 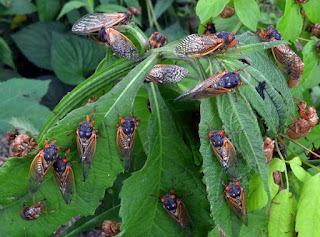 Hildreth kept a diary; here are just a few of his notes:
May 27, 1812: ...the cicada is beginning to appear in vast quantities on the trees and bushes in the woods...The hogs are very fond of them and devour all they can find."
June 4: The cicadas begin begin to deposit their eggs in the tender branches of...trees...; and when anyone passes near, they make a great noise, and screaming, with their air bladders, or bagpipes...indeed I suspect the first inventor of the (bagpipe) borrowed his ideas from some insect of this kind."
June 12:...The cicadas still very busy depositing their eggs...The female has..an instrument in the center of her abdomen with which she forms the holes to deposit her eggs - at the instant the hole is made....one cicada will lay an immense number (of eggs)...at least one thousand.

In 1812 he determined ("I have learnt to a certainty") that the cicadas last emergence was in 1795 - 17 years before. This was based on observations of a Mr. Wright, a landowner along the Muskingum River.

Wright had cleared his land in phases during 1795 to plant an orchard. Part was cleared before the cicadas emerged. The other portion was cleared later, after they were gone. In 1812, Wright noted that cicadas did not appear on the land cleared early in 1795. But they did emerge from the land cleared later in the year wherever a tree had stood before (and where the newly hatched cicadas would have burrowed into the ground for their 17 year "gestation").

Hildreth was also an accomplished artist, producing life-like detailed images of cicadas, such as the one below. 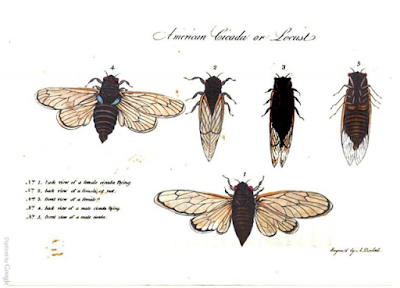 Image by Hildreth from Notices and Observations on the American Cicada, or locust, published in the American Journal of Science and Arts, 1830, reproduced from Derek Hennen's blog at normalbiology.blogspot.com

Soon the 17 year cicadas in Eastern Ohio will vanish - until magically reappearing in May of 2033 - continuing a cycle that has repeated over millions of years.