Imagine a scenario where there is mass transit throughout the Mid-Ohio Valley. Trains run frequently and on time, connecting both cities and surrounding rural areas. Ownership of cars and trucks is optional. A futuristic vision, unlikely to ever be realized? Not at all. Interurban rail systems (“interurbans”) offered reliable passenger and freight service to our area in the early 1900s. What was it like then and why did it end?

Interurbans were separate from conventional railroads. They were powered by electricity and generally used lighter equipment and were primarily for passenger traffic. They began with trolleys. Many cities began horse drawn streetcars in the 1880s. Electric powered trolleys soon became more reliable and convenient – and did not produce horse manure. City trolleys soon expanded to connect cities to each other and the surrounding countryside.

These so-called “interurban” train systems expanded rapidly. They offered frequent, convenient transportation and served rural areas bypassed by the railroads. The early interurbans were profitable, attracting passengers and investors. During the 1900-1910 decade hundreds of interurban systems were built. Ohio had one of the most extensive systems. By 1910 there were more than 15,000 miles of track in service. Interurban rail operations were reported to be the fifth largest industry in the nation.

The Parkersburg-Marietta area developed an excellent interurban system starting around 1900. Both cities began with horse drawn streetcars in the 1880’s and within a few years graduated to electric trolley cars. In Parkersburg, the electric trolleys were crowded late into the night on the first day of operation in July of 1898. 7,400 fares were collected that day. Marietta began electric trolley service in 1895. In 1899 plans were announced to build an interurban line from Parkersburg to Williamstown. And, there were bigger plans in the works – a bridge spanning the Ohio River connecting Marietta and Williamstown.

In 1901 a contract was awarded to build the bridge. Unlike today, most bridges of that period were built with private money and operated as toll bridges. The Ohio River Bridge and Ferry Company raised the money and would operate the bridge. Beman G. Dawes was the President and H. B. Foyt was Secretary. Construction began in 1900 and was finished in 1903. At the time, this bridge was the longest cantilever design span on US inland waters.

The bridge and interurban rail service required big money. The total investment for the bridge alone was reported to be about $900,000. That is over $21 Million in today’s dollars. Much of this money was available because the Marietta-Parkersburg area was thriving economically from oil and gas activity (sound familiar?) and industrial growth.

The interurban train operations were consolidated under one company, the Parkersburg Marietta Interurban Railway Company (“PM&IU”). Service to Williamstown from Parkersburg began June 25, 1902. On that day the line was swamped with traffic. In one car with 48 passenger seating capacity, 206 passengers crowded on for one round trip. In August of 1903 the bridge opened and train service from Parkersburg to Marietta began, running from 5 am to 10 pm daily. 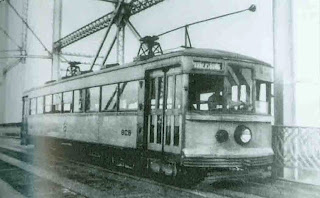 
In 1908 PM&IU the line was extended up the Muskingum River on the east side to Beverly. On October 14, 1910, The Beverly Dispatch reported “…Sunday the cars began running early in the morning and continued until late in the evening, leaving every two hours. All the cars were well filled Sunday as they have been ever since. …The road (rail service) is an excellent thing for people all along the line….” Beverly was the farthest extension of PM&IU up the Muskingum River. The Baltimore and Ohio Railroad, which owned the tracks up the west side of the Muskingum, thwarted the PM&IU goal of expanding towards Zanesville. 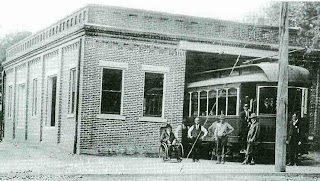 The interurban became part of the fabric of life in our area. People rode trains for shopping, town visits, family visits, commuting to work, or for nightlife exploits. One local lady recalls fondly riding the trains to visit family in Parkersburg. Ted Bauer, former Marietta Times City Editor and local history buff, remembers the trains well. He rode the train out to Masonic Park which was “quite a gathering place” at the time. He and his wife Ruth rode the train to Boaz (WV) to the Rose Bowl dance club – a favorite stop for young people of the area.

The Ferncliff Pavilion was built by the PM&IU Company around 1906 to attract riders to Ferncliff, then at the end of the train line. It became a popular location for organizational and family outings. 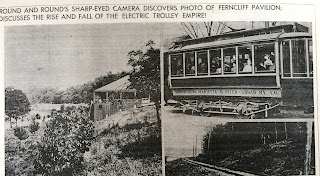 Copy of S. Durward Hoag article in the Marietta Times. 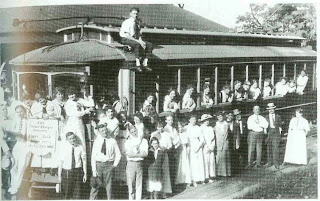 Parkersburg had at least two attractions that drew train riders. The first was Terrapin Park, built in 1899 near Dudley Avenue and 25th Street in Parkersburg. It had a cigar store, café, and a 2,000 seat auditorium that drew large crowds for plays, live music, and vaudeville shows. It was destroyed in 1917. 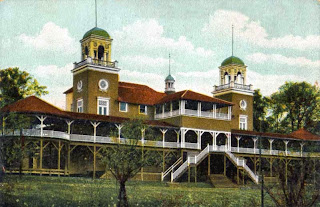 In the 1930’s Sherman Dils turned the second floor of his Motormart Ford dealership into a dance floor which he called “The Coliseum.” Big name dance bands like Tommy Dorsey and Glenn Miller drew people from miles around, often riding on the Parkersburg Marietta interurban trains. Marietta College students of that period, including my mother, often frequented those dances via the train.

People also used the trains in the 1920s and 30s to reach bars or night spots that served alcohol. Some localities voted to prohibit alcohol sales. People could easily ride the train to their favorite drinking establishments outside of the dry zones.

Life was good for communities served by interurbans. However, by the early 1920s growing car and truck use initiated the decline of interurbans, accelerated further by the Great Depression in the 1930s. By 1929 the from Marietta to Beverly line was abandoned as ridership and freight service dwindled. Marietta's trolley system closed in 1934. Parts of the Parkersburg trolleys gradually phased out. But the train service from Parkersburg to Marietta continued until 1947, far longer than most other systems.

Today be alert for evidence of the former train system. You will see former rail beds along area roads, embedded rails in Putnam Street, the curved lines of Rathbone Road and the Tiber Way building on Butler Street, former car barns in Norwood and in Beverly, and trestle sites such as at Big Run above Lowell along state route 60 and just below Boaz on WV 14. These are reminders of how extensive and important the once-thriving interurbans were to our area and much of the nation.

If you have memories, facts, or commentary about the interurban trains, please let me know. My e-mail address is dbb1946@gmail.com.
Posted by David Baker at 2:48 PM