In July, 1839, King Louis Philippe I of France received an American visitor, a Mr. Hughes, the American charge d’affaires in Stockholm. After introductions, conversation turned to the King’s visit to America in the late 1790’s.

King: “Have you ever been at Marietta?”
Mr. Hughes responded yes, that he had lived there for several years.
King: “Did you know a French baker there, named Thierry?” Francis Thierry was a French immigrant who arrived in Marietta in 1790 with his wife and two children.
Mr. Hughes answered that indeed he knew Thierry.
King: Explaining with amusement, “Well, I once carried him away from his family,” referring to a decades-earlier incident during Louis Philippe’s visit to Marietta in 1797. More about this episode later.

Louis Philippe De’Orleans, later King Louis Philippe I, “King of the French” visited the United States in 1796 and 1797. The King often amazed visitors with his memory of minute details of his American tour decades earlier. 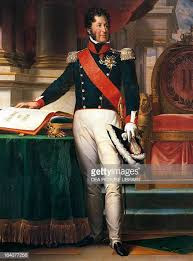 Marietta Connection - Ephraim Cutler
There were two Louis Philippe encounters with a Marietta connection. The first was a chance meeting with pioneer leader Ephraim Cutler who recorded the event in his journal. He met two Frenchmen while boiling salt at the "Salt Works"1 on Salt Creek in Muskingum County, Ohio. He was working there with a friend, Peter Noblaise, a Frenchman who had emigrated to Gallipolis,Ohio.

The two visitors asked to stay with Cutler and Noblaise that night. At the cabin Cutler noted that the three Frenchmen became "quite loquacious in their native language." Noblaise was a good singer and sang the Marseilles hymn and several French airs. Cutler reported that one of the men asked him detailed questions about the Ohio Company, and the settlements at Marietta and Gallipolis. After midnight they retired. Ephraim gave the man his bunk and bear skin. As they left the next day, Louis’ companion explained to Noblaise that the other man was Louis Philippe, Duke of Orleans. He would later be King of France

Louis Philippe was born into royalty in the House of Orleans in 1773. He and his family supported the French Revolution. At age eighteen he was given a command in the French army. He performed well but was forced to flee when he was implicated in an ill-fated attempt to overthrow the French government. He spent the next twenty years in exile from France. 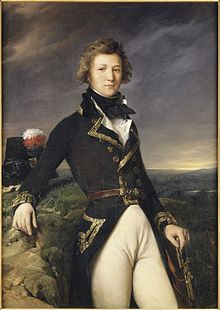 Louis Philippe and his two brothers, Antoine Philippe, the Duke de Montpensier,  and Louis Charles, Duke De Beaujolais, toured the United States. Louis Philippe was anxious to see natural wonders, Indians, and the backwoods of the new country. The introduction to Louis Philippe's Diary of My Travels to America, observed: "What is amazing is the breadth of his experiences and the distances he covered when most of the Eastern half of the United States remained unknown and unexplored.“

Marietta visit
Louis’ other local visit was a stop at Marietta in December of 1797 toward the end of their American tour. They were on a keelboat trip down the Ohio River, headed  to New Orleans and a return trip to Europe. It was December. River travel was treacherous with the ice, swift currents, and snags. They pressed on anyway.

At Marietta they stopped for supplies. Louis Philippe wanted fresh bread was directed to the Francis Thierry, the baker whom King Louis Philippe recalled. He had no bread available at that moment and fired up his oven to begin baking. The group obtained their supplies and toured Marietta. They were fascinated by the Indian mound earthworks ("interesting ancient remains") and made a sketch of them.

As they prepared to leave Marietta, Mr. Thierry rushed the fresh bread to the group's boat on the Muskingum River. But ice on the river was breaking up at that exact moment. The boat lurched away from the shore - with Thierry still on board - to avoid the ice. He was frightened but soon was deposited on dry land by canoe when the ice danger passed. The future King and his party continued down the Ohio River grateful for the fresh bread. He would later amuse listeners, such as Mr. Hughes, in retelling the adventure of "kidnapping" a French baker at Marietta.

The American Tour
Louis Philippe had arrived from Europe in October 1796 at Philadelphia, then the U. S. Capital. He met many prominent people while there and made a good impression. He was described as “modest, amiable, unpretending, cheerful, forgetful of his lost rank." Louis Philippe witnessed the inauguration of John Adams and heard Washington's last speech as President. He reportedly proposed marriage to a young lady. She apparently was willing, but her father was not: "As an exile, destitute of means, you are not a suitable match for my daughter."

Louis Philippe was not a typical prince in demeanor or lifestyle. He and his brothers had been educated by a governess, Madame De Genlis. They learned by doing through games and role playing. They learned other languages. They spoke only English at lunch; Italian at dinner; German when working with a German gardener. They were toughened by sports, long walks, and sleeping on the floor. He also developed medical skills working with a surgeon. It was an education for adversity as well as for the royal life. Louis Philippe recalled later that his governess "brought us up with ferocity." 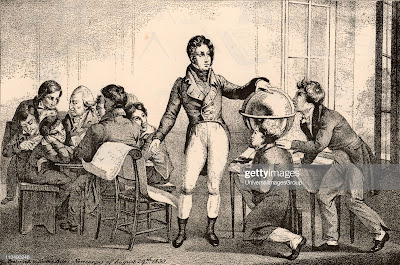 Lithograph after the painting by David showing him in Switzerland circa 1793 teaching geography and mathematics under an assumed name at the college at Reichenau during his 21 years of exile from France. (Photo by Universal History Archive/Getty Images). A few years after this he visited America.


His two brothers joined him in America after a long sea voyage in February of 1797. Soon the trio was off to explore. One of the the first stops was Mount Vernon. They visited with George Washington for four days. Washington gave them a recent Abraham Bradley map of the United States and traced a recommended itinerary in red ink. The future king impressed visitors by showing them the "George Washington" map years later. 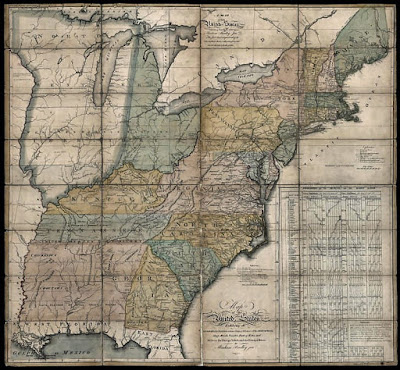 They next wound their way through Virginia, Tennessee, Kentucky, and southern Ohio. Often they lodged with locals, sleeping on the floor surrounded by the occupants, sounds, and smells of a cramped cabin. They stayed one night with a Captain Chapman in Tennessee who wondered out loud why they would “endure all the fatigues of a hard journey to see wilderness, savages, and other (unworthy things).”

At Chillicothe, Ohio, Louis Philippe stopped a barroom brawl, rescuing the landlord. They endured bedbugs, coarse manners, indifferent workers, excess drinking by the settlers, and periods of rough travel. Antoine Philippe wrote to his sister in August 1797 after a rugged two weeks in New York State: “We have spent fourteen nights in the woods, devoured by all kinds of insects, soaked to the bone, unable to get dry, eating pork and sometimes a little salt beef and corn-bread.”

There were also delightful visits and excellent hospitality. They met prominent people in cities like Pittsburgh, Boston, and Philadelphia. There were surprise encounters with emigrants from France. One of these, Chavelier Dubac, ran a sweet shop in Pittsburgh. His pet monkey, Sultan, entertained guests.

They spent time with Indians to learn more about them. Louis coaxed Cherokees in Tennessee to play a lacrosse-type game. At a Seneca Indian Reservation in New York state, he successfully treated a tribal chief by bleeding him. The chief granted Louis the high honor of sleeping on the family mat - between the grandmother and great aunt.

The brothers departed the U.S. from New Orleans in August of 1798 bound for Cuba. They finally reached England in February of 1800, after a series of harrowing delays. Louis Philippe eventually ascended the French throne as Louis Philippe I, “King of the French” in 1830. He wrote to  historian François Guizot in 1839: “My three years’ residence in America have had a great influence on my political opinions and on my judgment of the course of human affairs.”

His reign promised to be middle-of-the-road. He was called “citizen king.” Attempts at reforms were frustrated by political and economic unrest. There were seven assassination attempts on the King's life. He was deposed in the French Revolution of 1848. That ended the monarchy for good. Louis Philippe I was the last King of France. He died in 1850.