“When our arrangements for going west were completed, on the 15th of June, 1795, I left Killingly (Connecticut) and departed from a circle of friends from whom I had received every mark of friendship from my childhood, and who had bestowed on me at a maturer age many evidences of respect and confidence. Mrs. Cutler’s friends, as they pressed around her at parting, expressed their fears that she could not survive the journey. She answered cheerfully, that ‘she had committed herself to God, her Savior,’ and was not disheartened by any apprehensions. ...Our assembled neighbors gathered around and bade us farewell, with many good wishes and tears. Thus we left the scene of my early life, and started on this then hazardous journey and perilous enterprise.” 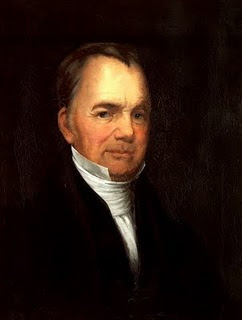 Portrait of Ephraim Cutler by Sala Bosworth viewed at  https://people.ohio.edu/deanr/ephraim_c.htm

Ephraim Cutler's journey to Marietta in 1795 was especially harrowing. It is recounted from his memories of the actual events. Quotes are from his recollections, Life and Times of Ephraim Cutler. He experienced many setbacks in his early life, the trip to the Marietta area, and the first years living there. But he overcame adversity with perseverance and a positive outlook.

The journey to the new settlements in Ohio in the late 1700's was fraught with challenges. Travel was physically difficult - rugged terrain, no roads, long distances. Indians were a threat. Illnesses such as smallpox, diarrhea, bilious fever were common and could be fatal. Journey was also a metaphor for major life changes which accompanied moving to frontier settlements. Life there was radically different, often involving hardship, isolation, and lack of cultural activities.

Ephraim, the eldest son of Manasseh Cutler, became a successful political leader and businessman in Southeast Ohio. He was was raised in Connecticut by his grandparents, but by his late 20’s had yet to find his niche. He was by then married with four children. After a failed mercantile business and losses as an agent for Ohio Company subscribers, he was restless for change. His wife Leah was in poor health. Her doctor advised that a warmer climate would be good for her. “This determined me to (move) to Ohio....and my wife approved...”

The Cutlers embarked from Killingly with a wagon, a yoke of oxen, two horses, and a milk cow “which gave us an abundance of milk on the way." They were accompanied by Colonel Israel Putnam, Israel Putnam, Jr., and their families, and Phineas Matthews. At Bethlehem PA, they stopped and visited Reverend John Heckewelder, noted Moravian missionary. Heckewelder was present at Fort Harmar treaty negotiations with Indian tribes in late 1788.

As they crossed mountains west of Carlisle PA, the pregnant wife of Israel Putnam, Jr. became seriously ill and gave birth prematurely.  They carried her on a makeshift stretcher to a home at the base of the mountain. The Putnams remained there until Mrs. Putnam could travel again. The Cutlers and Mr. Matthews continued on to the Monongahela River near Williamsport (now Monongahela PA). There Ephraim ordered a Kentucky flatboat built to transport the four families to Marietta. 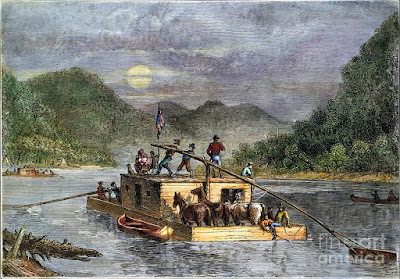 A man named Becket allowed the Cutlers to stay in a cabin of theirs. The two families became close friends during the Cutlers' visit while the boat was being built. Ephraim seemed sorry to leave them when the flatboat was ready to take them on to Marietta. “I have ever felt grateful to him and to his family, not only for their friendly courtesy, but for substantial favors received.”

Ephraim and Colonel Israel Putnam took the horses and cow by land through Washington PA to Wellsburg VA (now West Virginia) on the Ohio River. The others set off in the flatboat on the Monongahela River. Surely the rest of the journey would go more smoothly, Ephraim hoped.

At Wellsburg, Ephraim and Colonel Israel met up with Colonel’s son Aaron Waldo Putnam and Phineas Matthews. Aaron had come up from Belpre to assist in bringing the flatboat down the Ohio River to Marietta. Matthews explained that the flatboat only made it about 15 miles to present day Elizabeth PA because of low water conditions on the river. He reported that Ephraim’s wife, the elder Mrs. Putnam, and Israel Jr. were all sick. The four men exchanged foreboding glances. The illnesses were likely bilious fever; it was contagious and often fatal.

The group decided that Aaron Putnam and Phineas Matthews would take the livestock downriver. Colonel Putnam and Ephraim returned to the boat. In a few days, a rise in the river allowed them to again start out in the flatboat. Now, Ephraim thought, they could make it to Marietta in a few days without further incidents. Ominously, sickness continued to afflict the group. Colonel Putnam and the Cutlers’ youngest son Hezekiah became ill.

Below Pittsburgh progress on the Ohio River was “exceedingly low” due to low water. They were averaging only three or four miles per day. “....we were often aground; and I, with George Putnam, was much of the time in the river lifting at the boat, to get it over the sand-bars and shallows.”

A few days later, before reaching Beaver Creek, their “dear little son” Hezekiah died. “We stopped at a new place where the owner had buried some of his family, and by their side deposited his remains.”

Cutlers’ eldest daughter Mary became ill with bilious fever and soon died. Ephraim poignantly recalled their grief. “(We lost) one of the most promising children I ever knew. She was quite precocious in all her improvements...and interested all who saw her. To add to our distress we had no alternative but to commit her to the earth in the dreary wilderness, far from the habitation of any civilized being.”

As they approached Marietta, Ephraim’s wife Leah fell and broke two ribs. Then Ephraim was severely weakened by dysentery.  The group finally landed at Marietta on September 18,1795, just over three months after they left Connecticut. The Cutlers found temporary housing at "a stockade," probably at Picketed Point near the Ohio River in Marietta.

It had been a devastating journey. But they had made it. Ephraim recalled that their feelings “were varied.“ “We had overcome the labors and fatigues of a long and perilous journey; but we had to mourn the loss of two of our dear children one just budding into life,...the other, the darling youngest son....We had landed sick, among strangers, and (with) little hope that I should ever rise in health. Such was our introduction to pioneer life.” 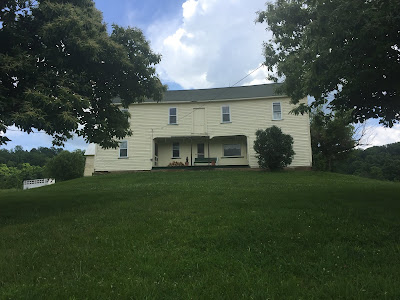 Ephraim Cutler home at Amesville OH where the family lived 1799-1806. The home still stands today; the current owner hopes to do some restoration work. Image from theclio.com.

When his health recovered in Marietta, there was no stopping him. He went on to become a successful farmer, public servant, educator, and political leader. Among his accomplishments: 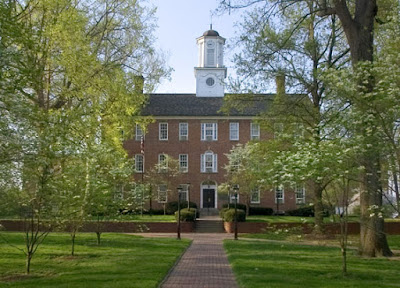 Cutler Hall is the oldest building at Ohio University, built in 1819. It was named for Manasseh Cutler, Ephraim’s father. However, Ephraim is credited with co-founding the University and served as a Trustee for 30 years. Viewed at Ohio.edu.

What gave him the courage to persevere through these early challenges? He credits his grandparents, self education, and working with people (farming, public office, Ohio Company agent) at a young age. He also noted a "special (divine) providence (which) guides and directs the affairs of men. I can not be sufficiently thankful that God has thus preserved me. The glory and praise be to His holy name."