A Century of Service - The Story of the Hippodrome, Colony, and Peoples Bank Theatre

Peoples Bank Theatre in Marietta, Ohio, was born as the New Hippodrome Theater 100 years ago in May of 1919. It was renamed the Colony Theater in 1949, then closed in 1985. In 2016, it began a new life as the beautifully restored Peoples Bank Theatre which continues the tradition of top quality entertainment for Marietta. Congratulations to all who helped make this wonderful restoration of the theater and of world class entertainment possible. 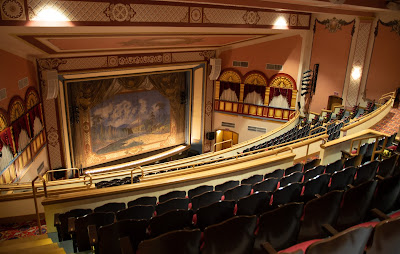 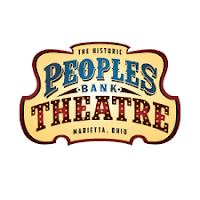 Construction was begun in 1918 by C & M Amusements to replace the original Hippodrome Theater located near Union Street which burned in 1917. The New Hippodrome Theater, as it was known at first, was a truly a first class facility. It was built to the recently adopted strict code Ohio building laws with fireproof materials and many emergency exits. The theater could be evacuated in an emergency within two minutes.

The "Hipp" began eight years before "talking" pictures. Most of the early fare included vaudeville acts, Broadway plays, and silent movies with music from the organ and the five piece Hippodrome Orchestra. The theater opening on May 2, 1919 featured Mary Pickford in "Daddy Long Legs." It was released to C&M Amusements two weeks early to attract interest in the theater opening.

The Hipp was updated in 1928 with audio equipment for "talking" movies. It continued with movies, plays, and local productions. Actor Boris Karloff starred in a live stage production in the 1943. Someone recalled that an elephant walked on stage as part of a circus act, but I can't verify that. Country western star Tex Ritter walked across the stage on his horse in the early 1950's. 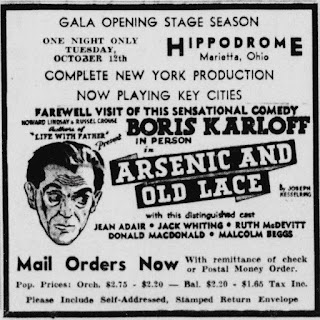 
Blues singer Mamie Smith gave her first of nine concerts at the Hipp on Feb. 23-25, 1933. Born in Cincinnati, Smith made history thirteen years earlier in 1920 with the recording of "Crazy Blues," considered to be the first blues vocal recording and the first blues hit, selling more than 1 million copies in less than a year. Although her style was more vaudeville and cabaret than straight blues, she nevertheless was an important pioneering artist, paving the way for great female blues artists such as Bessie Smith and Ma Rainey. 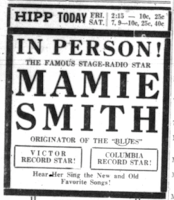 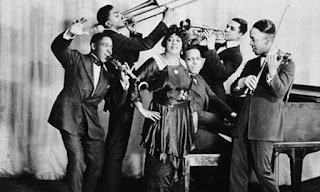 Productions by local talent included minstrel shows and school plays. My Uncle, Dan F. Baker, recalled memories of the Hippodrome Theater. Walter Baker (Dan’s father and owner of Baker & Baker Jewelers) performed with members of Kiwanis Club in a Minstrel show. He was playing a woman and had to find size 9 high heeled shoes. He found the shoes at Kesterman Shoes then located next to Baker & Baker Jewelers store on Front Street.

Dan himself performed with former Procter and Gamble CEO Ed Harness in "Emperor Who Had No Clothes." Dan - 9 years old at the time and an accomplished vocalist (was invited to join the Vienna Boys Choir) - was a character in a singing role with a single spoken line. He also played the little lame boy in the "Pied Piper of Hamlin," played the little lame boy. He performed in operettas "South in Sonora," and "Pirates of Penzance."

My father, W. Norman Baker appears in one of the few stage photos from the Hipp early era, below. It featured him (third from left) and his brother Dan (far right). An article from the Marietta High School paper "The Original" in 1938 mentions the play, "Applesauce." 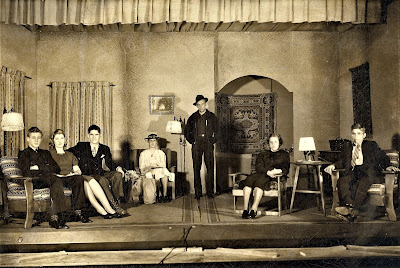 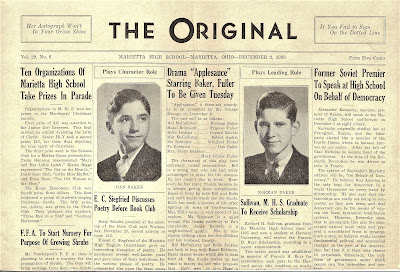 The images below include three advertisements, one for a movie, one for a live performance, and another for an unusual game of chance to win tickets to the Hipp. 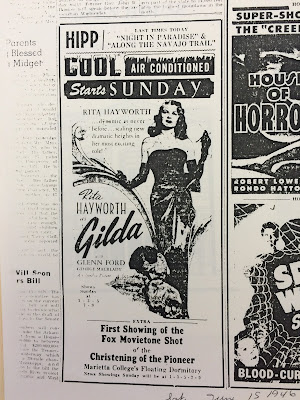 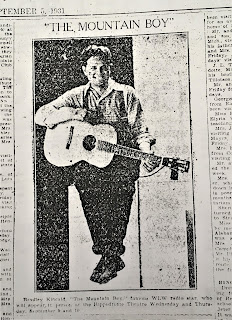 Bradley Kincaid, "The Mountain Boy," was a WLW Radio Cincinnati recording star who performed at the Hipp. Image from Peoples Bank Theatre. 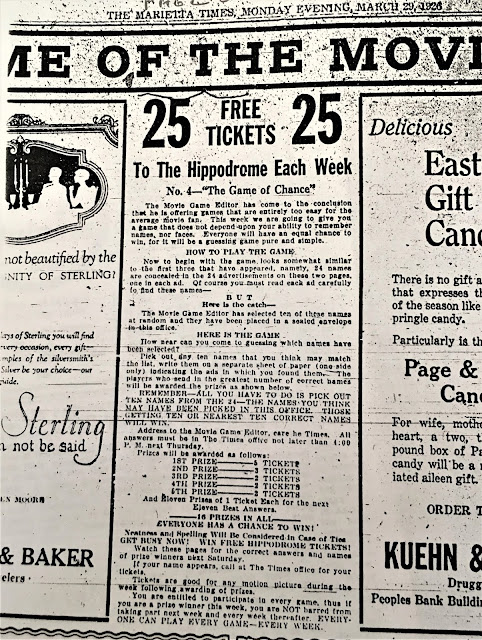 Ad for weekly "Game of Chance" which gave away a total of 25 tickets to the Hipp to winners of the guessing game. Can you decipher this and figure out how the contest worked? Ad image from Peoples Bank Theatre

The New Hippodrome Theater disappeared, as it were, after the theater was sold to Shea Theatre Company in the late 1940's. It was extensively remodeled and re-opened in 1949 as the Colony Theater. There was a contest for submission of names for the remodeled theater. Mariettan Jack Lowe suggested the "Colony Theater" name. It was chosen for the reference to Marietta's history, and "quality, brevity, and clarity." Lowe won the prize of $25.00 (about $250 in today's dollars).

The biggest event in the theater's history was the 1957 premier of the movie "Battle Hymn" which chronicled the heroic actions of Marietta native Colonel Dean Hess during the Korean War. The movie featured then mega-star and teen heart throb Rock Hudson. There were parades, Hollywood dignitaries, and appearances by other actors in the movie.

The Colony featured first run movies and other variety acts, including local talent, Handel's Messiah performances, country and rock acts. St. Mary Catholic Church held services there in the early 1970's while the church was renovated.

But, alas, the theater attendance waned in the late 1970’s. The Theater changed hands several times. It was owned in the latter years by Marjorie Bee who heroically tried to keep the theater alive with second run movies, occasional concerts, and local events. Concerts included country artist Ernest Tubbs, The Ohio State Jazz Band, and the Buckeye Travelers country music entertainers. For some time she operated the theater without phones, heat, or advertising to save money. A sign at the theater entrance told patrons to bring blankets during cold weather.

The theater closed for good in 1985 and was later purchased by local businessman Dan Stephan. It was through his vision and persistence that a campaign to restore the theater began. It culminated with the grand opening in January of 2016. Today, the Peoples Bank Theatre is again a vital cultural and entertainment asset to Marietta.