The Woman's Home, a Pioneering Charity

The term "pioneer" is synonymous with Marietta's founding and early years. Mariettans were also responsible for establishing two pioneering charitable organizations. One was the Washington County Children's Home, the first government-funded home in the country. It was founded through the pioneering (there's that word again) efforts of Catherine Fay Ewing. Read more about it here.

The other was The Woman's Home, begun in 1885 for indigent women in Washington County. Women of that period who were widowed, unmarried, or without family often suffered financial hardship. Many were isolated from friends and community.

The Civil War created large numbers of widows and orphans. Their situations raised the national awareness of the need. Financial resources taken for granted today such as social security, pensions, medicare, and personal savings were lacking in the mid 1800s.

The wife of William R. Putnam first voiced the need for a community- supported home for indigent women. After her passing, Putnam and other leaders pursued the project.

The  "Centennial Souvenir", published for Marietta's Centennial in 1888 by Mrs. L. A. Alderman, reported that in 1880 "an incorporate act was provided,.....a board of gentlemen appointed as trustees, and as many ladies as a Board of Managers." Catherine Fay Ewing assumed a fund raising role. Douglas Putnam and M. P. Wells donated two lots on Third Street. Architect Adolph Morris donated his architectural services. The sixteen room home was built at a cost of $2500. 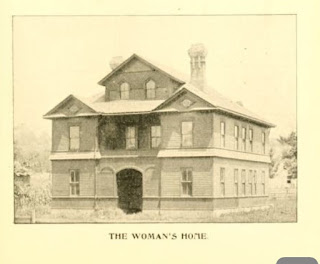 Woman's Home circa 1900, located as it is today at 812 Third Street in Marietta - copied from Century Review of Marietta, Board of Trade Edition.
CLICK TO ENLARGE

The Centennial Souvenir described the Home which then had just opened.  Mrs. Alderman promoted the Home as a memorial to the original women pioneer settlers whom she characterized as courageous yet little known. She continued, "How could they be more fittingly memorialized than in having this charity, this gift to the aged and respected women, which is managed entirely by women, dedicated as a testimonial to (the pioneer women's) courage and patriotism...." Mrs. Alderman encouraged the women of Washington County to support the Home.

Furnishings, such as linens, handmade quilts, and dishes were donated by the community. Furniture was donated by the Marietta Chair Company, then a major employer (your author's great grandfather Daniel Baker worked there) with a national reputation.

The home opened in 1885. The community was actively involved in the Home. Donations funded operations and improvements. Civic groups offered services and regular visitation. This ongoing support continued for decades. 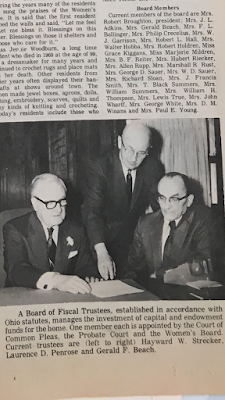 Marietta Times article excerpt March 8, 1973. See above right portion of photo for list of managing board members at the time. Photo shows members of Board of Fiscal Trustees.
CLICK TO ENLARGE

The vision for the Home expressed by Mrs. Putnam and her friends was captured in a 1973 Marietta Times article: "They envisioned a gracious home where residents could come and go as they pleased. It was not to be a nursing home but a 'real' home where the women could be surrounded by their own furniture and belongings."

Hundreds of women have lived at the Home over its 132 year history. There were a myriad of backgrounds, talents, and activities. Below are a few profiles taken from Marietta Times articles, the first in 1973, the second two in 2005.

Jennie Woodburn, a long time resident, was a dressmaker and continued to crochet until her passing at age 99 in 1969.

Ruth Basim moved into the Home in 1978 at age 65 but continued working as a secretary. In 2005, she had only recently retired.

Margaret Fauss enjoyed her favorite rocking chair. "I like all the people here," she said. "Honestly and truly, I have never had any better treatment than I've had here. I couldn't be in a nicer place with nicer girls."

Many expressed their gratitude over the years. The very first resident reportedly said ..."blessings on those it shelters and those who care for it."

In recent years, The Woman's Home, has operated as an assisted living facility. Its small, personalized operation has worked against it. Costs have outstripped revenues. An endowment which funded losses is nearly exhausted.

The Home will close in June, 2018. It is a bitter-sweet end for a venerable cause. Fortunately, the support for the elderly that was unavailable a century ago is largely being provided with today's social services. But the homey atmosphere and camaraderie that made The Woman's Home a "real" home can't be replaced.

Sidebar notes from the research for this article that captured your author's attention: