David Putnam, Jr., Conductor on the UGRR. All Aboard!

"The alarm was given through Harmar that a mob had assembled at (David, Jr.) Putnam's house and had threatened to destroy it ; that a large number of men were there from Wood County (then Virgina) and more ware coming..." So the Marietta Intelligencer of February 11, 1847 reported when David Putnam, Jr., a "conductor" on the Underground Railroad, harbored two escaping slaves, one named Steven belonging to George Henderson.

The account went on to report that the pro-slavery mob from Virginia was "vexed to learn that the negroes were dressed up in cloaks, marched unnoticed through the crowd, furnished with horses, and started post haste for Queen Victoria's dominions (Canada)." Clever. This episode sparked a lawsuit against Putnam by Virginia plantation owner George Henderson. More on that later.

David Putnam, Jr. becomes an abolitionist
David Putnam, Jr. was one of seven children of the distinguished David Putnam. David Sr. was a Yale-educated local civic leader and instructor at Muskingum Academy - the first institute of higher learning in the Northwest Territory. 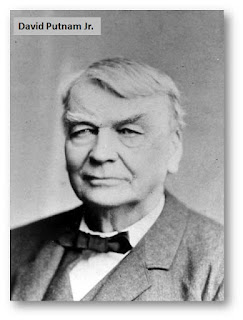 David, Jr. inherited the Putnam family's disdain for slavery. His father was opposed to slavery. Nancy Putnam Hollister, Marietta civic leader and a descendant of David's brother Douglas, observed that  "All of the (Putnam) family members were really abolitionists." David had seen slaves in neighboring Virginia "sold down the river" into the deep south, often separated from their families. He became a zealous abolitionist.

In 1835 William Weld, distinguished anti-slavery lecturer visited Marietta. He wanted to speak at Marietta College. That was considered unsafe because of the risk of violence from pro-slavery interests. He lectured instead at the local library. Weld was an eloquent, persuasive speaker. A local anti-slavery society was formed in 1835. David Putnam, Jr. was active in the movement which also attracted other area leaders.

Emotions ran high on both sides of the slavery issue. In the two decades leading up to the Civil War, many slaves escaped to freedom by crossing the Ohio River. Slaves called it the River Jordan. They were harbored by sympathetic people on the Ohio side where slavery was illegal. The fugitive slaves were placed into a network of secret routes and safe houses on a route to Canada on what became known as the Underground Railroad (UGRR). 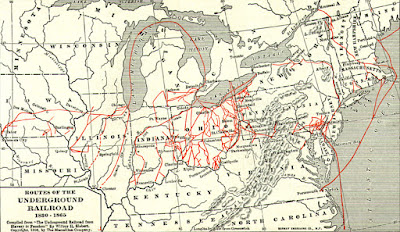 Putnam operated a mercantile business in Harmar and was involved in local civic organizations. But his most notable passion was helping fugitive slaves escape. He formed a network with area anti-slavery sympathizers. Those included Col. John Stone in Belpre, Judge Ephraim Cutler in Constitution, and many others.

Fearless fighter
David Putnam, Jr. was fearless in his anti-slavery efforts. He sheltered runaway slaves in his own home, often at risk to him and his family. His home was built in 1831 -  part frame and part brick, located on Maple Street. It was torn down in 1953 for a highway improvement. Reports suggest that a smoke house located at the rear of his home had a false ceiling which was used to hide slaves. Another account refers to a secret tunnel in the cellar. Putnam boasted that he kept slaves in the parlor, though that seems unlikely. 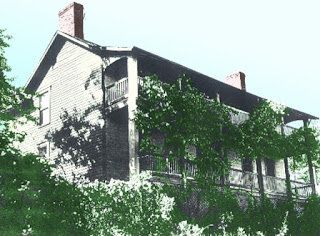 Putnam was quite willing to fight for the cause, literally. Late local historian Henry Burke described Putnam as "being willing to settle disputes either by diplomacy or with his bare knuckles." He often confronted slave bounty hunters. A contemporary of his, General Israel Putnam, described him as "in his prime a huge man towering several inches above six feet in height, with a voice and heart as big as his frame.

Slave owners in western Virginia reviled him. Historian Wilbur H. Siebert stated in The Mysteries of Ohio’s Underground Railroads: “... he (Putnam) was hated across the Ohio (River) and was attacked by roughs when he stepped from a steamboat on to the Parkersburg (VA, now WV) wharf. Being a man of braun and courage, he fought them vigorously till he fell back into the river.” A steamboat deckhand kept him from drowning. Another version dates this story in 1839 and says Putnam was confronted by a man with a revolver at the Wood County Courthouse. A mob formed, throwing stones and shouting insults. Putnam was forced into the river where he was rescued.

Home and family were in the middle of sometimes dangerous action
Putnam's children knew about their father's efforts but were often unaware when fugitives were present. One rainy day, Putnam's young daughter Hannah was playing inside the house with a friend. They opened a closet to find a slave crouched inside. Apparently unfazed, Hannah closed the door and continued playing in another room. On another occasion, a visitor to the house named Miss Stone saw a slave who had run upstairs from the basement when a search party burst into the Putnam home. She beckoned him to the bedroom closet, then laid down in the bed, pretending to be sick. Pursuers withdrew when they saw her.

Hannah was born several years earlier in the home following a frightening slave incident. A pro-slavery mob threatened to storm the Putnam home to free a slave(s) sheltered there. Putnam's wife, Hannah, was about to give birth to a daughter. Dr. Joseph Cotton arrived at the home late in the evening to deliver the baby. He realized that Mrs. Putnam's life could be at risk if the mob was not restrained. He called for help.

Some prominent citizens from Marietta came to the home, including Dr. John McCoy. McCoy was a tall man, who wore a large cape and wide-brimmed hat. At 1:00 am, a tall man with the same cape and wide-brimmed hat pulled down over his face walked nonchalantly down the front walk and disappeared into the night. No one noticed that it was the fugitive slave. The next morning, Mrs. Putnam, greatly relieved that a crisis was averted, gave birth to Hannah.

Risky work, often at night, with coded messages required full commitment
Coded messages and auditory signals were used to arrange transfers of the slaves across the river to safehouses in Ohio. Aunt Jenny, a slave in Parkersburg who helped others escape, used a horn. David Putnam, Jr. and others used a hoot owl call. Putnam's daughter Martha recalled hearing her father make the hoot owl call "hundreds of times."

David Putnam received a handwritten message from John Stone in Belpre about an UGRR transfer in August, 1843. It is shown below as recited in Wilbert H. Siebert's book, The Underground Railroad from Slavery to Freedom. Note the deliberately vague wording. Spelling and punctuation is as written:

Belpre Friday Morning
David Putnam
Business is arranged for Saturday night be on the lookout
and if practicable let a cariage come and meet the Carawan.
J. S.

Helping escaping slaves required almost 24/7 involvement, an additional sacrifice to the helper's personal life. Movements most often took place at night. General Rufus Dawes recalls visiting his grandfather Judge Ephraim Cutler's home (and UGRR station) at Constitution, about halfway between Marietta and Belpre. He was eight years old at the time. "Somehow in the night, I was wakened up, and a wagon came down over the hill to the river. Then a call was given, a hoot owl call, and this was answered by similar one from the other side; then a boat went out and brought over the crowd. My mother got out of bed and kneeled down and prayed for them, and had me kneel with her."

A document of David Putnam, Jr. shows his UGRR activity in late August, 1843, copied below from Siebert's book mentioned above.

Siebert notes that this log "is plainly a schedule of arriving and departing 'trains' on the Underground Railroad." It also indicates by the arrival and departure times how long the "passengers" were sheltered before moving on. Some left the same day. In one case, the party stayed more than 4 days before departing. The log suggests the amount of effort, personal sacrifice, and risk faced by Putnam and others working on the UGRR.

David Putnam, Jr. also faced legal action for his actions in harboring slaves, some of whom belonged to George Henderson, a local plantation and slaveowner. His plantation, called "The Briars," was on land where Henderson Hall is located today. Henderson brought two actions against Putnam in U.S. District Court in Columbus on June 25, 1849, one for the loss of the slaves allegedly harbored by Putnam and another for damages. The total amount sought totaled $15,500. In today's dollars, that amount could approach $500,000. Putnam was defended by Salmon Chase, nationally known abolitionist lawyer and future governor of Ohio. The cases dragged on with little action and were eventually dismissed, the loss case in 1852 and the damages case in 1853 - mainly because the applicable laws had changed in the interim.

Putnam and countless others helping on the Underground Railroad were true heroes, often unrecognized for their efforts because of the UGRR's secretive nature. Their efforts were vindicated when slaves were emancipated by President Abraham Lincoln's Emancipation Proclamation in 1863. Even in later years, Putnam's daughter Martha said her father became "exceedingly excited and worked up" when talking about his slavery activities. He died in 1892 and is buried in Harmar Cemetery near his former home.