The recent cold snap was pretty impressive for our normally mild winter climate. There was nearly a week of subfreezing temps, including a few days with high temperatures below 20. Average high temperature in January is about 40. That is at least a 2 sigma standard deviation event, in statistical lingo. Meaning, it's really unusual.

The ground was frozen solid, making for uneven footing on the hiking trail where we walk the dogs. One section of our driveway heaves up with that kind of cold. I was forced to dig out a seldom used ski mask for cold protection. The waterfall in the creek below our property was frozen into a bridal veil filigree. We were able to walk on water (frozen, that is) where the trail crossed the creek. Tess, our smaller and more skittish old english sheepdog, stopped at the icy edge of the creek, afraid to cross. Gabbie, the other old english sheepdawg, skidded back and forth across the ice, unfazed. There is a definite beauty in the snow-covered frozen tundra. But it's still damn cold. 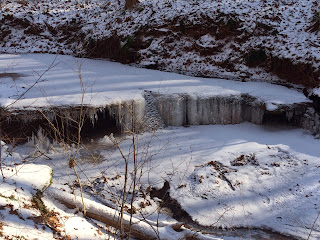 Frozen waterfall near our home

On one of the dog walks, my thoughts went back to winters past. There was day in 1963 when the temp never rose above zero. We rode a toboggan sled down the 18th fairway at the country club. Halfway down we upset in a blizzard of freezing powder. I laughed so hard I wet my pants - which soon froze into a yellow crust.

January and February of 1977 stand out as the coldest months I can remember. There were days on end with low temperatures in the single digits - above and below zero. The Ohio and Muskingum Rivers were frozen over. Tow boats could not operate. Natural gas pipelines stopped working. Over the road diesel trucks were laid up because the cold turned the diesel fuel into gel. Snow rollers, a rare phenomenon in which high winds blow snow into hollow cylinders, appeared in the field next to the former Children's Home buildings. 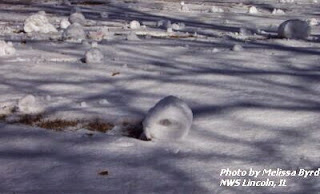 The National Weather Service said that the period from January 10 through February 8, 1977 was the coldest on record for Cincinnati, Columbus, and Dayton. Ditto for most of Ohio. The average temperature for the period was around 11.  There were 28 days with temperatures below zero. The coldest was January 17 and 18 when temperature in most of Ohio dropped to -25 on 2 successive nights. The cause of this cold snap was a polar vortex which wandered too far south and hung out there for quite a while. 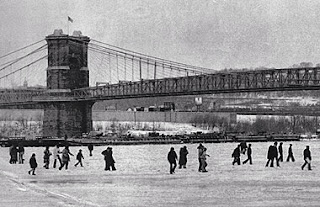 It was so cold on January 23, 1977 that people walked across the frozen Ohio River. (Credit: The Enquirer/Tom Hubbard). Photo and caption appeared in article 1/13/2011 by cincinnati.com staff

Even in an era of global warning, cold extremes can still occur. Like last year's polar blasts and this year's cold snap. Could the winter of 1977 happen again? Yes, but odds are VERY low, thankyaverymuch.