S. Durward Hoag was the long time owner of the Hotel Lafayette in Marietta during the 1940-1970 period. He was an astute businessman, Marietta area promoter, and local historian. Many credit him with helping add I-77 to the interstate highway system. There was no I-77 in the original plan.

He ran a weekly Marietta Times advertisement which featured his "Round and Round Below the Railroad Tracks" column. It was a clever mix of Hotel promotion, community interest, history, and commentary. The column always featured Marietta photographs - many he took himself and others he collected over the years. His collies (one was named "Yampa") were often featured, usually with a goofy photo.

I marvelled at his writing output. How could he manage the hotel while producing a full column with several in depth topics and photos each week, I always wondered. He also kept prodigious scrapbooks on area happenings. They are housed in the Washington County Public Library Geneology and Local History branch.

It is winter now, as you've probably noticed. In researching a recent blog post about the winter of 1977, I came across the photo below in one of Hoag's articles, dated December 4, 1962. The photo and his caption tell the story of one severe winter in 1905. The photo and caption appear on the website label which appears as "Ice Scenes- Wiki of the Public Library of Cincinnati and Hamilton County."

The photo is viewed from Harmar with the Williamstown Bridge in the background. Look at the highest part of the building in the upper left part of the photo. To the right of that rectangular tower is a smallish looking spire. That was part of the Hotel Lafayette at the time, before it later burned and was rebuilt. 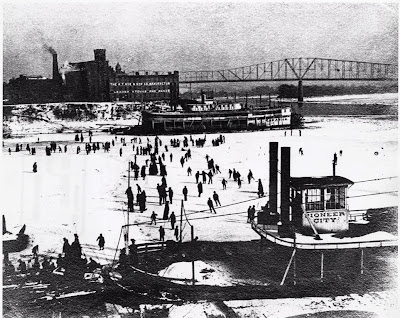 Icecapades of 1905: Mariettans in January of 1905 watched the thermometer drop below zero for an extended spell. Ear muffs, long underwear, galoshes, hand muffs and fur-lined gloves were dug out of the mothballs ready for use. A light snow had fallen but was not heavy enough for good sledding or sleigh-riding. Many Mariettans, wise to the way of the rivers had already broken out their ice skates and had oiled, polished and sharpened them, ready for the day when the Muskingum River ice would be thick enough to hold a body in complete safety. Those were the gold ole days when automobiles, movies, radio and TV as we know them today were unheard of. Local folks made do with whatever was on hand and found a lot of fun and recreation provided by nature such as fishing, boating, swimming, hiking, camping and in winter ice skating. Few people of this generation in Marietta have seen or experienced ice skating provided by nature. It has been 25 years or more since the rivers froze sufficiently to provide one of the most exhilarating and healthful of outdoor sports. There was no age limit for ice skating and anybody from tots, age two to oldsters, age 75, danced, frolicked, played tag, cracked-the-whip and other games. Few feelings compare to the thrill of gliding silently across the ice with all the freedom of movement that only ice skating can provide. Here was provided good clean fun and healthy exercise. Ice skating is an excellent aid for posture, a straight back and graceful movements of the body as well as providing a healthy glow from exercising the whole body. Either figure or speed skating, Mariettans enjoyed the Icecapades of 1905 as shown by the above pictures, the upper along Muskingum Park and the lower at the mouth of the Muskingum River.

Email ThisBlogThis!Share to TwitterShare to FacebookShare to Pinterest
Labels: frozen Muskingum River, Hoag, Hotel Lafayette, Round and Round Below the Railroad Tracks, winter