“At eight in the morning I left the house in the company with my guides, taking with us two large lamps, a compass, and something for refreshment and entered the cave.” So begins Nahum Ward’s 1815 exploration of Mammoth Cave in Kentucky in search of a mummy. His exhausting tour lasted 19 hours straight ending at 3 am the following morning.

Publication of his grandiose cave exploration account titled "The Wonders of Nature” brought national attention to him, Mammoth Cave, and the mummy discovered there. The storyline is a fascinating mix of natural history, controversy, and good intentions gone awry.

Many readers may know that Nahum Ward was a prominent early Mariettan, owner at various times of 100,000 acres of land and of a showcase home in Marietta. The Marquis de Lafayette was a guest at his home. He was also a dedicated family man and civic leader.

A business connection brought Nahum Ward to Charles Wilkins’ Lexington, KY general store in November of 1815. Wilkins told Ward about Mammoth Cave and the mummy. Ward was hooked. He had to see that mummy, and visited Mammoth Cave shortly after that.

Quotes that follow are from Ward’s own narrative. He and two guides started into Mammoth Cave at 8 am. The first natural landmark he describes is chief city – a vast area within the cave. He is awed by what he sees: “…when I reached this immense area (chief city), which contains eight acres, without a single pillar to support the arch, which is entire over the whole, I was struck dumb with astonishment. I can give you but a faint idea of this chief city. Nothing under heaven can be so sublimely grand than this place…”

Navigation in the cave was a challenge since there were no existing maps. After one frustrating stretch, Ward explains, “…we were very much bewildered, and once completely lost for fifteen or twenty minutes. At length we found our way, and, weary and faint, entered the chief city at 10 at night. However, as much fatigued as I was, I determined to explore the cave as long as my lights held out.”

Even after 14 hours, he pressed on. They encountered bats – “numerous, continually in our faces … like so many imps they tormented us….” He admits that he himself provoked the bats by trying to clear them from the roof of the cave with his walking stick.

Nahum Ward finally reached the mummy. He described it as a female about 6 feet tall and weighing only 20 pounds. The owner of Mammoth Cave, Charles Wilkins, reported that it was originally found in nearby Short Cave and relocated into Mammoth Cave for preservation. This and other mummies found in area caves were preserved because the cave atmosphere prevented decay. 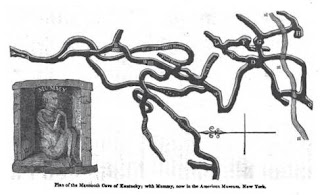 Charles Wilkins in a letter describes the mummy: “It was found at a depth of about 10 feet from the surface of the Cave, …in a sitting posture, incased in broad stones, standing on their edges, with a flat stone covering the whole. It was enveloped in coarse clothes, …wrapped in deer skins....enclosed in the stone coffin were the working utensils, beads, feathers, and other ornaments of dress, which belonged to her.”

The mummy became known as the "Mammoth Cave Mummy" and was later named "Fawn Hoof" by Nathaniel Parker Willis in 1852. The mummy and Mammoth Cave would soon “go viral” after publication of Ward’s Mammoth Cave narrative in May of 1816. It was boosted by popular interest at the time in artifacts, fossils, exotic novelties - especially such items from the unexplored west. The "west" at that time referred to anything west of the 13 colonies.

Over time, a mummy melodrama developed - with Nahum Ward both the hero and villain.Ward the villain took the mummy under false pretenses, profited by exhibiting it as a sideshow, allowed it to deteriorate, reneged on his promise to give the mummy to the American Antiquarian Society (“AAS”), tried to sell it, and gave up the mummy only when threatened by legal action.

Nahum Ward the hero/good guy rescued the mummy from likely decay (Wilkins thought the mummy had no value to anyone), spent time and money to transport it, earnestly tried to donate it to AAS, donated money earned from exhibitions to charity, and suffered damage to his reputation. Ironically, AAS thought the mummy was a hoax and refused it, only to realize their mistake and pursue legal action against the same person (Ward) who had tried so hard to give them the mummy.

History supports Nahum Ward's version of events. Yet all of this was an agonizing experience for him. His intentions were good, but ultimately he gave up the mummy to AAS in 1817. He expressed his great frustration at the unfairness of the accusations against him in letters to his father. It was quite a learning experience – and unique addition to his resume’ - for a young Nahum Ward, who was 32 at the time he gave up the mummy.

Fawn Hoof the mummy, meanwhile, continued in the public eye at the AAS. It was later exhibited at World’s Fairs of 1876 and 1893 as the Mammoth Cave Mummy. After 1876, it was turned over to the Smithsonian Institution. Eventually it was dismembered and the bones stored in a box under accession number 4789. Researcher Angelo George claims in his book (Angelo I. George, Mummies, Catacombs, and Mammoth Cave, George Publishing Company, 1994) that “Fawn Hoof is still doing well at her old box number in the Smithsonian,” a silent reminder of her earlier celebrity life and of her connection to Mariettan Nahum Ward.