The 1978 Coal Strike: Perseverance and The Wall Street Journal

It would be a winter to remember. December 1977 started out harmless enough, though very cold. News about a nationwide coal strike by the United Mine Workers which began on December 6, 1977 was lost in the background of holiday busyness.


As 1978 began, the coal strike became national news. Without coal being mined and delivered to supply electric power plants, power generation would eventually shut down. The threat of cold homes, dark streets, and shuttered factories loomed.

The second severe winter in a row took hold, adding to the urgency of the coal miners strike. There was heavy snow that winter, the most I remember before or since. Snow accumulated to depths of 2 to 3 feet.  Vehicles were buried for days on end. We had to stand above our mailbox and stoop to retrieve mail. Scraping snow from our patio awning to prevent collapse became a daily chore. There was a initially a sense of wonder at so much snow, but that soon dissolved into annoyance.


January faded into February with little prospect for a strike settlement. Business and government officials scrambled to establish contingency plans. Public utility regulators in Ohio and West Virginia both imposed voluntary 10% power reductions for industrial and commercial businesses. I was President of the Marietta Area Chamber of Commerce (MACC) that year. That group issued guidelines for conservation which included reduced lighting and hours of operation. Compliance with the guidelines was mixed. MACC executive Ernest J. Hartong stated “Unfortunately we have not received all the cooperation that we would like to have...” Merchant Gabe Zide commented that “some businesses wouldn’t shorten their operating hours come hell or high water.”

A Marietta Times informal survey of area residents showed a mix of concern and cautious optimism. One woman said "I'm hoping we won't (have blackouts) but afraid we will." Many were trying to conserve - doing laundry and dishes by hand, turning off lights and electric blankets. A later article explained home appliances' use of electricity: Minimize the use of electric ranges and ovens, especially the broiler; back off on the clothes dryer and hair dryer; no problem using an electric toothbrush.

I worked at Peoples Bank and recall conservation measures there: Sam the custodian came around and removed some light bulbs from each office. One elevator was taken out of service. External lighting and hours of operation were reduced. Many other businesses did the same: 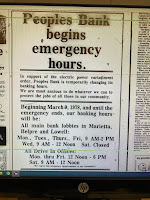 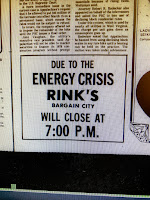 Locals may remember Rink's, then a discount store similar to Walmart. Today it houses
"Rinky Dinks" (get it?) flea market. Marietta Times image courtesy of the Washington County Local History and Genealogy Library. CLICK TO ENLARGE 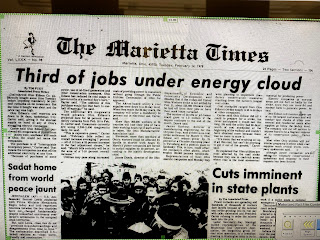 Frustration increased as there were mixed messages from regulators and utilities. Deadlines for drastic mandatory conservation actions were postponed, yet conservation was admonished as though it were mandatory. A tentative pact to settle the strike was rejected by the UMW bargaining council on February 12. Politicians vocalized complaints, chided President Jimmy Carter to do more, and offered endless suggestions. Ohio Governor James Rhodes' comment to President Carter on February 10 was typical: "Bring (the negotiators) into the White House, put them in a room and lock the door, and keep them there until they have the answer.” Nice sounding rhetoric, but real world collective bargaining doesn't work that way.

Marietta Mayor Geoffrey Brunton encouraged conservation. Streetlights were darkened in much of the city. A generator was on standby to power critical emergency operations. Yet, he, like many other officials, expressed confusion over when, how and by whom cutbacks will be ordered. Mayor: “We are having a hard time keeping up with with all that is going on, because hour to hour, day by day, someone issues a different statement.”

Marietta's situation was reported in a February 16 Wall Street Journal front page article: "Marietta, Ohio, Dims Its Lights & Hopes for Early Coal Accord." The lead sentence in the article starkly introduced the crisis situation: "Last night the Marietta City Council met by candlelight - to discuss the power shortage that already is beginning to choke this Ohio River town." The article chronicled the effect of the coal strike on Marietta. It mentioned the efforts of "28-year old Mayor Brunton" to encourage conservation. Some businesses were ignoring the directives. The paper reported that "after chewing out a one local hotel manager for leaving his lights blazing, the young mayor exploded: 'What can I do? I can't fine 'em, I can’t shoot 'em.' " 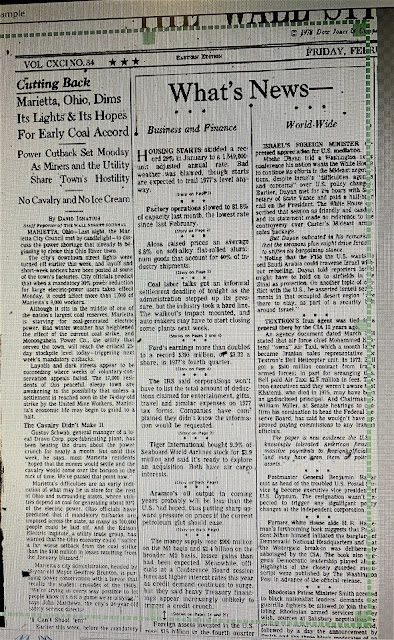 Other community reactions were noted in the article. Citizens National Bank (Chase Bank today) president James E. Hanna tried to calm a caller, "I was in the infantry years ago and I don't panic." Rinard's Coal Co. was asked to deliver non-union coal to a coal-heated school upriver from Marietta. Movement of non-union coal could trigger threats or violence from striking miners. The school superintendent called a district United Mine Workers official to explain the situation. The official responded menacingly "You're on your own if you buy non-union (coal). We'd rather you closed down..." Mr. Rinard made the delivery anyway without incident.

A Marietta Times article profiled two area striking coal miners. “...we’ll stay out (on strike) as long as it takes,” said Dan Johnson, 27, of Fleming who is married with a 5 year old daughter. He worked at Quarto Mining Co Mine No.7 at Powhatan Point. “If I have to, I’ll borrow money from my parents, sell my truck and my guns. I’ll do anything until we get an acceptable contract.” His greatest concern was about the right to engage in wildcat strikes (impromptu work stoppages to protest a grievance). He said that such strikes are often the only way for miners to protect themselves from unsafe conditions or practices. Dave Clift, 28 years old from Newport, said "I'm just starting to hurt now, too. I have $450 month in bills coming in, but they're stacking up now. Both trusted the UMW bargaining council, "....they won't accept a contract until it's right for us," Clift said. 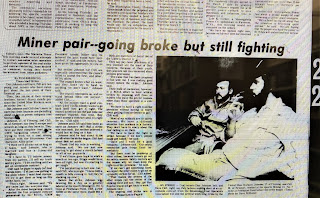 Another tentative settlement was reached in late February. Rank and file coal miners voted 2 to 1 against the pact, despite an advertising campaign which included soft sell messages from country singer Johnny Paycheck of "Take this Job and Shove It" fame. President Carter invoked the Taft-Hartley Act on March 6, legally forcing miners back to work for a 60 day cooling off period. The miners ignored the injunction.

I chaired the MACC annual dinner on March 13. 750 people ate dinner and listened by flickering candle light. The venue, Ban Johnson Field House at Marietta College, was darkened for electricity conservation. I mentioned that the candles were "courtesy of the United Mine Workers." The line drew a laugh from the audience, but I felt a pang of guilt knowing how 160,000 miners were suffering through the strike.

Finally, the strike was settled on March 19 after negotiators worked out a compromise on the wildcat strike provision. Creative conservation by users and the utility companies averted major blackouts and layoffs. The last of the record snowfall had finally melted in Marietta. Life would soon be back to normal. Eventually Sam the custodian stopped by my office at Peoples Bank to chat and install the light bulbs which had been removed weeks earlier.