The Marietta Times newspaper on July 7 and 8, 1938 was filled with details of President Franklin D. Roosevelt's visit. He spoke in Marietta on July 8 as part of the 150th anniversary celebration of Marietta's settlement. You can learn more of his visit here.

I am fascinated by articles, photos, and advertisements in old newspaper editions. They offer a window into the fabric of life in their time period. My research about FDR's visit concentrated on the Marietta Times editions. I was often distracted by articles on topics other than the presidential visit.

Here are a few of the headlines and advertisements that caught my eye. It is surprising how many themes recur in any period of history - political carping, love affairs, the economy, and oddities of human behavior.

New three cent postage stamp originates in Marietta - again. The new stamp commemorated the 150th anniversary of 1787 ordinance. A Postal official visited Marietta; he estimated that 250,000 covers would be given first day cancellation at the Marietta post office. Marietta was the only city besides Philadelphia where first day covers were issued in 2 successive years.

Marriage veteran will wed spinster. An 84 year old Abner Welch of Columbus, 4 times a widower and twice divorced, will marry Kate Austin, who has never been married. Welch was the oldest person to ever apply for license in Columbus.

Page 16
The Armory in Marietta was a busy place. See ad below. Notice the reference to "park plan" for the afternoon dance. Not sure how that worked. Cost was 5 cents a dance. 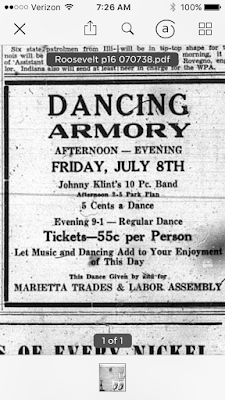 Cut off his own hand. Carl Winkler, 24, of Detroit wanted to quit the Michigan National Guard. Thinking there was not other way out, he severed his right hand with five blows of a hatchet.

Dr. Morgan seeks back salary, job. Dr. Arthur E. Morgan sued the Tennessee Valley Authority for reinstatement to the chairmanship and back pay. He was ousted by President Franklin Roosevelt for "contumacy" (insubordination). Morgan's suit claimed that his firing by the President was illegal, since such action can be taken by Congress. Imagine that - claiming that a President did something wrong.

Landon sees slump after "pump prime."
Alfred M. Landon was a former Kansas Governor and 1936 Republican Presidential candidate. He lived in Marietta for a several years during his childhood. His father was a field manager for Union Oil Company. Landon was educated at the Marietta Academy. The family moved on to Kansas in 1904, when he was 17. 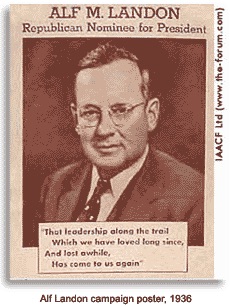 Landon was responding on national radio to a President Roosevelt "fireside chat" address which promised more economic stimulus ("pump prime", in the headline) Landon warned that the depression would continue unless the FDR administration changed it's policy. He characterized the depression as "a political depression...brought on by the methods and policies of the present administration."

Police Ponder Widow's Death: "....Mary Britton, 29, an attractive widow, ....was found shot through the heart last night on the bedroom floor of an expensively furnished Centralia (Illinois) home...A note addressed to Elvin Satterlee, 40, owner of the home and head of an automobile agency, was crumpled beneath her body. It accused him of having fallen in love with another girl......Satterlee admitted having provided a home for Miss Britton for three years and had told her yesterday that 'we can't live here like we have been.'" This was definite tabloid material.

Says Much Smoking May Cause Cancer
This warning came from Dr. William H. Schultz in a talk before the American Osteopathic Society in Cincinnati. But his comments addressed only inflammation of the mouth and tongue, referred to as "leukoplakia" - which could become cancerous.

There was no mention of other cancers or health concerns from smoking. Certainty about those smoking risks was decades away. Some ads in that time period actually claimed or implied that smoking was part of a healthy lifestyle. Below are two such print ads for cigarettes from magazines of that era. 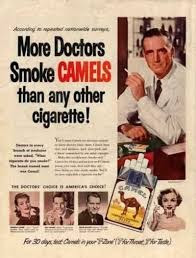 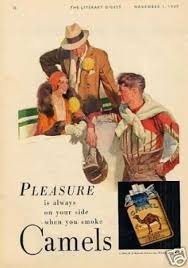 July 8, Page 12
Love Strike Okay: Here is another love situation gone oddly awry. Mrs. Heidi Heusser was on a "sitdown strike" at the home of wealthy sportsman Rollo K. Blanchard protesting his decision not to marry her. He allowed her use of his "palatial" Irvington, NY home for her "strike" and retreated to his yacht.

Rose Bowl Club in Boaz
Below is an advertisement for the Rose Bowl Club in Boaz, WV. Locals used to ride the interurban train to the club. Business was brisk when certain other areas were "dry," meaning alcohol could not be purchased. I tried to find the club location recently. It may have been torn down, but there is a nondescript concrete block building that could have housed it. 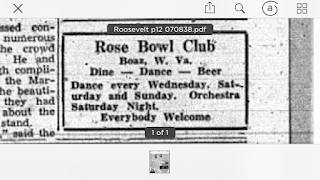 Sohio Service Center Official Opening Saturday.  An advertisement announced the opening of a new "Sohio Servicecenter" gas station at Putnam Ave. and Gilman Ave. in Harmar. The ad included a photo of four uniformed, bowtie wearing dudes described in a caption as: "Friends of Yours - this staff of well-trained, well known, local men is all set to give you the finest service you've ever known." They were identified as Guy E. Beardmore, Manager, and Emearl E. Stanley, James S. Ferguson, and James H. Warren. There were no self service gas pumps in those days.

Dime Savings Society Bank Statement. Banks were required to publish periodic financial statements. This statement reported total assets of $1,665,662 on June 30, 1938. Banks had a difficult time (many failed) in the early 1930's. The Dime Savings Society had weathered that period and was starting to grow again.

On July 7 and 8, 1938, there was no TV, internet, interstate highways, or smart phones. Hitler menaced Europe and the Great Depression lingered. But life was (mostly) good.
.