Movie premieres are glitzy, spectacular events usually held in large cities. That's why the designation of Marietta, Ohio, as the location for the Battle Hymn world movie premiere in February 1957 was so improbable - and such a historic event for the community.

I was in grade school at the time and recall much of the hoopla. It was brought to mind when tennis buddy Stev Pitchford sent me some of his photos of the parade. He was covering the events for WTAP in Parkersburg.

One unexpected twist occurred in my research: I learned that Dean Hess's version of the orphan "Kiddie Car" airlift - the event which brought Hess the greatest acclaim - was vigorously disputed by Dr. George F. Drake. In a 2004 publication, he claimed Hess exaggerated his role; see "Hess: Fraudulent Hero" by George F. Drake, Ph.D. at this link:
http://www.koreanchildren.org/docs/Hess=%20Hero-Thief.htm. More on Drake's claim below.

I had always wondered how Marietta was selected for the premiere. The Battle Hymn souvenir program gave me the answer. When Universal-International (U-I) announced the filming of Dean Hess's story, the Marietta community launched a campaign to convince U-I to premiere the film in Marietta. The "campaign" was not very organized, yet it "went viral" as a grass roots effort using 1950's communication modes.

Thousands of letters and telegrams poured into the office of David Lipton, U-I Vice President - from school kids, civic groups, community leaders, and ordinary citizens. Marietta College trustees proposed the college's Founders Day in 1957 for the premiere. Former Mariettans living in Southern California bombarded Mr. Lipton with calls promoting Marietta. "Never in all my years in show business have I seen such a civic push," Mr Lipton told reporters. "We were just overwhelmed." Marietta won the premiere. 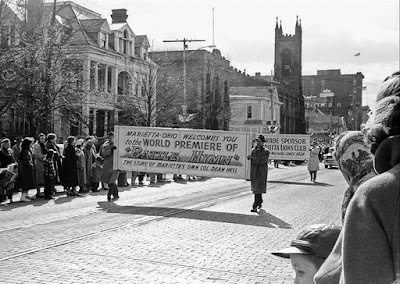 There was a three day celebration in Marietta which began February 12, 1957, when the leading actors in the movie arrived in a motorcade from the Wood County Airport. The movie stars included the then wildly popular Rock Hudson as Dean Hess, along with other established actors of that time: Martha Hyer, Dan Duryea, Don DeFore, Anna Kashfi, and Jock Mahoney.

Rock Hudson was a big name leading actor with rock star popularity. He was well liked by all age groups and had earned a solid reputation as a dramatic actor. The Battle Hymn Souvenir Program said he...."was chosen for the role because the quiet sincerity of his manner which so closely resembled that of Col. Hess." 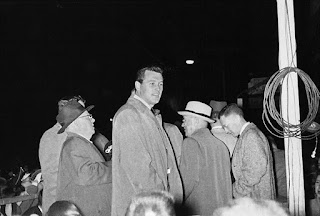 Martha Hyer played in numerous movies in the 1950's and 60's, and acted in guest roles into the 1970's. She was not in Marietta for the premiere. Don DeFore likewise was an established actor with many movies to his credit, along with TV sitcom roles in The Adventures of Ozzie and Harriett and Hazel.  Anna Kashfi had a brief acting career and was probably best known for being married briefly to Marlon Brando. 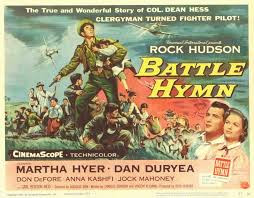 Local festivities included public appearances of Col. Hess and the actors, a parade, vintage aircraft fly-overs, reception given by Ohio Governor (and Marietta native) C. William O'Neill, awarding of an honorary degree to Rock Hudson on Marietta College's Founders Day, a queen contest, and the movie premier itself. The movie was shown at the Colony Theater (the former Hippodrome, now named Peoples Bank Theatre, which is currently being restored), Putnam Theater (now Mid-Ohio Valley Players Theater), and Ohio Theater which is now a store front on Second Street.

Recollections of premiere events in Marietta, some from Dan Benson's Memories of Marietta Facebook page, of those living in Marietta at the time:
Dean Hess was a remarkable individual. A Life Magazine reporter said Dean had three passions: children, flying, and faith. He began flying while still at Marietta College. Later he became a flying preacher, flying from one town to another to preach. He flew P-47s in World War II. Later he returned to the U.S. Air Force and was asked to teach South Koreans to fly and start an air force. Resources for his project were limited, forcing him to scrounge food and supplies for his fledgling unit. Col. Hess utilized on-the-job training and flew live missions with his cadets, showing them how and where to fly, drop bombs, and attack targets. He flew a total of 250 missions in Korea. 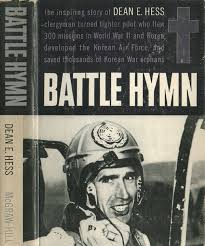 In between missions, he made time to help Korean orphans and children displaced by the fighting. He is credited with (a claim disputed by some) arranging an airlift dubbed "Operation Kiddie Car" to move hundreds of orphans from the mainland to a nearby island as enemy troops approached Seoul in December of 1950. He and his men also helped to provide food, clothing, and funds to support them. After the war, he wrote a memoir titled "Battle Hymn" about his experiences. Proceeds from the book and movie were used to build a new orphanage. 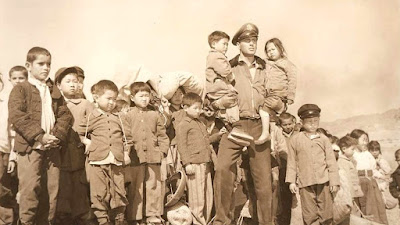 Rock Hudson pictured with actual Korean orphans who were brought from Korea for the movie.

Dean Hess was directly involved as an adviser to the Battle Hymn movie production. He vetoed Robert Mitchem, originally chosen to portray Hess, because Mitchem had done prison time. Life Magazine reported that Hess flew in some movie scenes and recreated actual battle events himself. Whenever the P-51 plane bearing the number 18 (the number on the plane he flew in the war) appears in the movie, Hess is piloting the plane. 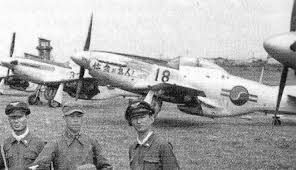 Hess's plane with By Faith I Fly insignia from forum.warthunder.com

Also on that plane, the inscription "By Faith I Fly" appears - in Korean symbols. His motto became the inspirational icon of Hess's heroic role in Korea. Hess's nephew Bill Hess of Marietta explained that the phrase became the motto of  the Republic of Korea (ROK) Air Force Academy. Thousands of ROK Air Force trainees over many decades have learned the motto and the story behind it.

George Drake disputed Hess's role in the orphan airlift nearly 50 years after it occurred. Drake gave Air Force Chaplain LTC Russell L. Blaisdell and Staff Sergeant Merle Y. Strang the credit for arranging the rescue. Drake says they stayed with the children in an abandoned school building waiting for a boat evacuation. When the boat failed to appear, Blaisdell improvised a new plan. He talked the Air Force into providing 16 C-54 transports to fly the 850 children and 80 staff to the island of Cheju-do. He also commandeered trucks need to transport the group to the airport.

Drake says these plans and the airlift were made without involvement of Dean Hess. He terms Hess's claim about organizing the airlift  as "fraudulent," and the many media stories about Hess's reportedly heroic role as outrageously inaccurate. Drake does credit Hess with donating book and movie proceeds to charity for the orphans. He also noted that Hess and his men worked tirelessly to support the children once they were relocated to Cheju-do.

I have not seen other reports to refute or support Drake's claims. Bill Hess, Dean's nephew, says the claims made by Drake angered Dean and his family, but they chose not to respond. It doesn't matter, anyway. Dean Hess's war service and aid efforts to Korean orphans - before and after the war - are exemplary. And the Hollywood premiere extravaganza was a remarkable event for Marietta.

Additional details about the Korean children and orphans helped during and after the war can be seen at the Korean War Childrens Memorial website: koreanchildren.org.

If readers have Battle Hymn memories of their own, please respond to this blogpost or let me know.