Charlotte Scott, a friend of Lincoln

The meaning of Presidents Day seems to have been lost. Mostly we think of it as a day off and a retail promotion time. The only presidential images we see are caricatures of Abe or George selling cars or whatever else is being promoted. One ad had George and Martha Washington sitting in a hot tub.

It was pure chance that yesterday, Presidents Day 2015, I came across the article below written by the late Henry Burke a few years ago. It gives marvelous recognition to Abraham Lincoln, one of the presidents honored on Presidents Day, and to Charlotte Scott, whom you will learn about below.

Henry was a local black historian, prolific story teller, and expert on the Underground Railroad. His blog post below tells the story of a former slave woman whose respect for Lincoln prompted the creation of a monument to the Emancipation Proclamation. Here it is, as written by Henry Burke.


A Friend of Lincoln’s
The last Emancipation Day celebration here in Marietta that I attended was held at the Washington County Fairgrounds in September 1945. Only 5 years old, I couldn't really grasp the importance of the event, but one thin memory has stuck in the back of my mind.

It was a beautiful fall day in the middle of the week, and I was allowed to be absent from school that day. I felt special and important because I was one of two black children in my class, and one of only four black pupils enrolled at Marion Elementary School. Ironically the other black child in my class was killed in an accident the following year at the Fairgrounds.

There were more black people there than I have ever seen, before or since, at one time in Marietta. Many white people also stood around on the fringes of the crowd with their hats off as the minister offered his prayer of thanks to God. I can remember a slight breeze coming from the direction of the Muskingum River. The county fair had recently concluded and the faint pungent odor of animals still drifted in the air.

After the prayer the principal speaker rose to address the crowd. I can't remember his name, but he was a tall, very black man with a well-tailored suit and dark tie emphasized by his starched white shirt. Now, I would be stretching it if I told you I can remember every word of his speech, but I can recall these words: "Lincoln's friend.

The speech was about Charlotte Scott, an ex-slave who had lived in Marietta with her employer, Dr. William Rucker. The family of Dr. Rucker's wife Meg had formerly owned Charlotte in Covington, VA. When Dr. Rucker married Meg Scott, her parents gave Charlotte to her as a wedding gift. You see, Charlotte had raised Meg, loving her as she would have her own child. 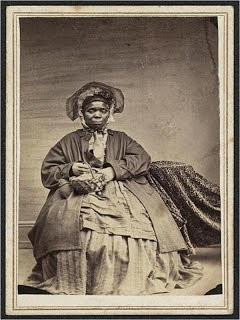 Soon after the marriage, around 1855, Dr. Rucker moved to Marietta to begin his medical practice. In spite of his southern origins, Rucker did not much care for slavery, so he gave Charlotte her freedom papers and began paying her a salary as soon as the three of them arrived in Marietta. For all practical purposes, Charlotte was a member of his family and that was the way she was treated.

Charlotte had been in Marietta ten years when on April 15, 1865, the news that President Lincoln had been assassinated the day before reached the Rucker household. When she heard the news Charlotte cried out, “Mr. Lincoln was a friend to the colored people, and he was my friend! He ought to have a memorial built in his honor.”

After Lincoln's assassination, former slave Charlotte Scott gave her entire savings of $5.00 to her employer, Dr. Rucker, and asked him to find a way to build a memorial for the late President. Dr. Rucker sent her contribution to James Earl Yeatman, an acquaintance in St. Louis who was president of the Western Sanitary Commission, which provided hospital services for Civil War veterans.

Moved by Charlotte's compassionate idea, Yeatman made the commission responsible for collecting donations for a memorial. To gain a favorable response among recently freed slaves, he publicized Charlotte's request and donation. Colored troopers under the command of J.W. Davidson were motivated to contribute $12,000, and another $12,000 was donated later by other freedmen.

The commissioners then spent several years looking for a design they felt would do honor to Lincoln. The very day Lincoln was assassinated, an American sculptor named Thomas Ball had designed a statue of the former president with an emancipated Negro. He wasted no time in making a model of the statue and placing it in his studio for friends to admire.

Eventually the commissioners approved Ball's design and asked him to cast it in bronze. The result was the monumentally imposing figure of Lincoln, his left hand over the head of an emancipated slave and the Emancipation Proclamation tucked under his right arm, seated in serene majesty in Washington DC's Lincoln Memorial. 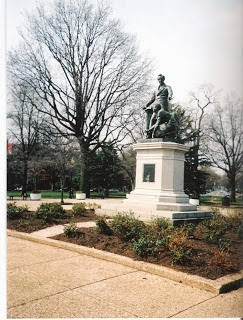 A plaque on the pedestal reads: “Freedom's Memorial, in Grateful Memory of Abraham Lincoln: This monument was erected by the Western Sanitary Commission of St. Louis, MO, with funds contributed solely by emancipated citizens of the United States declared free by his Proclamation January 1, A.D. 1863. The first contribution was made by Charlotte Scott, a freed woman of Virginia, and consecrated by her suggestion and request on the day she heard of President Lincoln's death.”

Charlotte was present at the unveiling and her picture was taken and sold to spectators. Her name was on the breath of every citizen of the United States.

After the Civil War Dr. Rucker moved his family back to Virginia, and Charlotte went with them, eventually dying and being buried not far from where she was born. Children pass by the cemetery on their way to school. Although their teachers tell them of the Great Emancipator and his martyrdom, they seldom if ever mention his very special friend --even though a monument to that friendship stands today in the nation's capital.

But I doubt that Charlotte Scott would mind that history has forgotten her. She simply wanted to express what every person of color felt. President Lincoln lifted the yoke of slavery from every black man, woman and child in the United States and made them citizens. After 246 years of brutal slavery, generations of grueling work without pay; after being beaten and cursed daily with the complete loss of their African heritage; after being bought and sold like animals, denied the freedom to educate themselves and determine their own futures...is it any wonder why freedmen loved President Lincoln so?

Every American, and especially every black American, should be proud that the sublime and inspiring monument in Lincoln's Memorial was paid for entirely by funds donated by African-Americans. And the citizens of Marietta can take pride that it was a former resident who had the idea and the seed money to turn a people's gratitude into a lasting tribute for free people of the world to contemplate.
Posted by David Baker at 8:26 AM