Edward Low was 12 years old in 1943, playing with two friends on a sandy hill overlooking the Ohio River near Parkersburg WV. He had sneaked away from home to explore. They dug a trench to make their game of war more realistic and struck something about a foot below the surface. He unearthed a thin rectangular stone with Indian-like carvings and took it home with him. He kept his "Indian rock" in a drawer. Years passed; he married and raised a family. His children took the stone to "show and tell" sessions at school.

In 1971 he had moved to Columbus and took the stone to the Ohio Historical Society (OHS - now Ohio History Connection) for analysis. OHS staff were excited by his find and complimented him on protecting it and seeking a professional assessment. He donated it to OHS. The Low Tablet was a significant addition to the group of other similar Adena stone tablets. It has been researched and on display continuously at the Ohio Historical Center in Columbus. 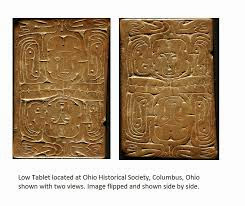 The image of the Low Tablet below right with black and white tones makes the design details more visible. The images on the left are of the Wilmington tablet which has some design similarities. 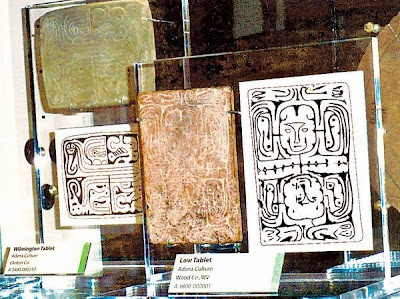 The Low Tablet became an unexpected center of controversy in 2007. Mr. Low tried to reclaim the tablet, stating that he had merely lent it to OHS. A five year legal proceeding and occasional public debate on his case ensued. The court eventually sided with the OHS position that he had donated the tablet. Edward Low died in 2010. 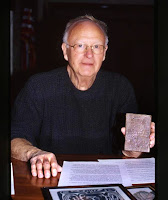 2008 photo WV Gazette of Edward Low with the tablet

The Adena people were a prehistoric civilization who inhabited the midwest during the Early Woodland period from about 1000 BCE to 500 CE. They were hunters, gatherers, and collectors. They were the first people in this region to settle in small villages, cultivate crops, use pottery vessels, use materials such as copper and shells to make ornaments and jewelry, and bury their honored dead in burial mounds.

Adena was the name of the estate of Thomas Worthington, sixth governor of Ohio. It was there that a mound yielded artifacts establishing the existence of the Adena culture. They are best known today as the mound builders. They built mounds for burial, as territorial markers, and effigy mounds depicting animals or symbols. The most prominent of the latter is the Serpent Mound near Peebles, OH.

Most evidence of their culture has come from excavation of mounds and village sites. Recovered artifacts include human remains, tools, jewelry, and the stone tablets, such as the Low Tablet. The purpose of the stone tablets is not entirely clear. Some researchers believe that they were used to imprint designs on cloth, animal hides, or human skin. Some tablets have been found with residue of ocher or hematite, a primitive type of paint that could have been used for imprinting. Others suggest that the stones' art works were ceremonial in nature, perhaps an image of a shaman or a mythological spiritual being.

The Low Tablet carvings include a human features, raptor images, and stylized wings which are typical designs found on other tablets. The frontal human face with more detailed features is unique, not found on other tablets. The human/raptor features been suggested by some researchers to represent shamans dressed in raptor bird costumes. This imagery is consistent with shaman costumes in other Indian cultures.

The Low Tablet is considered an excellent and valuable example of the Adena stone tablets. Robert Converse, editor of Ohio Archaeologist, appraised the tablet at Mr. Low's request and valued it at a minumum of $25,000. It could bring up to $250,000 if auctioned on the international market, he said. "It's irreplaceable."

OHS archaeologist Martha Otto concluded her Low Tablet research report in 1975 by noting that: "It is obvious that the task of interpreting the adena tablets is quite incomplete. Hopefully additional specimens will be found......In the meantime, we must be grateful for people like Mr. Edward Low who are curious enough and concerned enough to report their discoveries."

Some additional specimens have been found, including a stone tablet fragment in Washington County. See the fragment and article by Robert Converse in Ohio Archaeologist by clicking here. 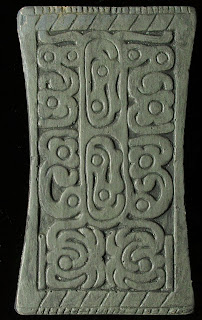 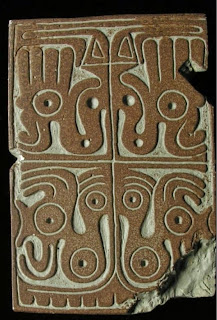